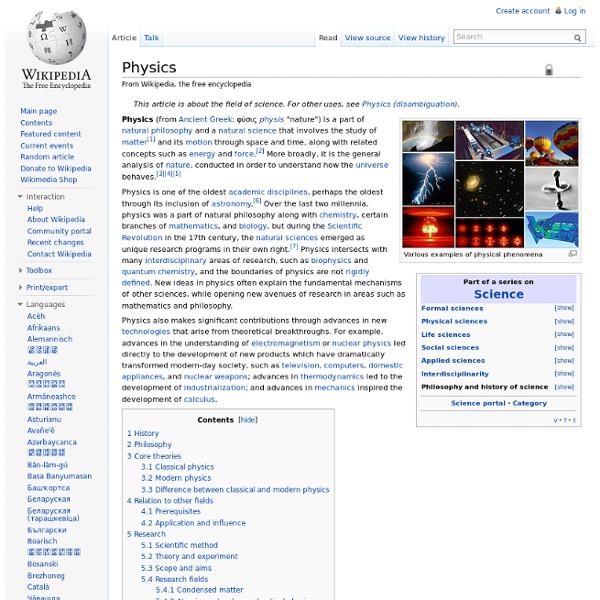 Various examples of physical phenomena Physics is one of the oldest academic disciplines, perhaps the oldest through its inclusion of astronomy.[8] Over the last two millennia, physics was a part of natural philosophy along with chemistry, certain branches of mathematics, and biology, but during the Scientific Revolution in the 17th century, the natural sciences emerged as unique research programs in their own right.[b] Physics intersects with many interdisciplinary areas of research, such as biophysics and quantum chemistry, and the boundaries of physics are not rigidly defined. New ideas in physics often explain the fundamental mechanisms of other sciences[6] while opening new avenues of research in areas such as mathematics and philosophy. Physics also makes significant contributions through advances in new technologies that arise from theoretical breakthroughs. History Ancient astronomy Astronomy is the oldest of the natural sciences. Natural philosophy Classical physics Modern physics

Related:  -2 • The problems with philosophy

Royal Society national academy of science in the United Kingdom The Royal Society, formally The Royal Society of London for Improving Natural Knowledge,[1] is a learned society and the United Kingdom's national academy of sciences. Founded on 28 November 1660, it was granted a royal charter by King Charles II as "The Royal Society".[1] It is the oldest national scientific institution in the world.[2] The society fulfils a number of roles: promoting science and its benefits, recognising excellence in science, supporting outstanding science, providing scientific advice for policy, fostering international and global co-operation, education and public engagement. It also performs these roles for the smaller countries of the Commonwealth. The society is governed by its Council, which is chaired by the Society's President, according to a set of statutes and standing orders.

The Wicker Man (1973 Edit Storyline Sgt. Biology History The objects of our research will be the different forms and manifestations of life, the conditions and laws under which these phenomena occur, and the causes through which they have been effected. The science that concerns itself with these objects we will indicate by the name biology [Biologie] or the doctrine of life [Lebenslehre]. Although modern biology is a relatively recent development, sciences related to and included within it have been studied since ancient times. Gulliver's Travels 1726 novel by Jonathan Swift Gulliver's Travels, or Travels into Several Remote Nations of the World. In Four Parts. By Lemuel Gulliver, First a Surgeon, and then a Captain of Several Ships is a prose satire[1][2] of 1726 by the Irish writer and clergyman Jonathan Swift, satirising both human nature and the "travellers' tales" literary subgenre. It is Swift's best known full-length work, and a classic of English literature.