Disney Audition Info. That said, casting talent is a job done individually within each company. 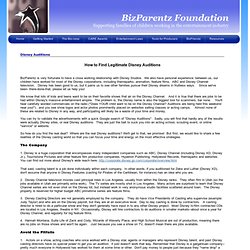 In other words, if you auditioned for Zeke and Luther (Disney XD), don't assume that anyone in Disney Features (casting for Pirates of the Caribbean, for instance) has an idea who you are. 2. Disney Channel television movies cast principal roles in Los Angeles, usually from within the Disney ranks. They often film in Utah (so the jobs available in Utah are primarily extra work). The TV series are mostly shot in Los Angeles. Many actors are surprised to learn that Disney Channel series are not even shot on the Disney lot, but instead work in very anonymous studio facilities scattered around town. 1. Even the top paid series regulars on Disney Channel are not paid as well as you might think. Feature Film and TV: Casting for principal roles is usually done out of the major markets in Los Angeles and New York, and they are handled through the normal professional channels. 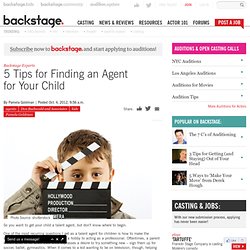 Photo Source: shutterstock So you want to get your child a talent agent, but don’t know where to begin. One of the most recurring questions I get as a talent agent for children is how to make the seemingly daunting leap from acting as a hobby to acting as a professional. Oftentimes, a parent knows what to do when their child expresses a desire to try something new – sign them up for soccer, ballet, gymnastics.

When it comes to a kid wanting to be on television, though, helping them fulfill this dream can be a challenge. In the entertainment business, getting an agent or manager to represent an actor is key. These standouts are who we want to represent. I love discovering children who want their big break, and I want to share five tips for parents to get their child in front of a talent agent. 1. 2. 3. Sub Pop Records. Founded by Bruce Pavitt and Jonathan Poneman in 1988, Sub Pop Records is a medium-sized independent record label based in Seattle, WA. 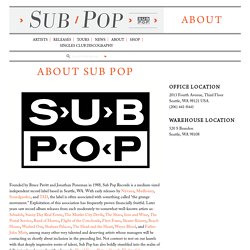 With early releases by Nirvana, Mudhoney, Soundgarden, and TAD, the label is often associated with something called “the grunge movement.” Exploitation of this association has frequently proven financially fruitful. Later years saw record album releases from such moderately-to-somewhat-well-known artists as: Sebadoh, Sunny Day Real Estate, The Murder City Devils, Hot Hot Heat, The Shins, Iron and Wine, The Postal Service, Band of Horses, David Cross, Flight of the Conchords, Fleet Foxes, Beach House, Washed Out, and The Head and the Heart, among many other very talented and deserving artists whose managers will be contacting us shortly about inclusion in the preceding list. Sub Pop Records employs somewhere between 37 and 45 people, most of whom work in our World Headquarters in Seattle. Make a Demo CD. Edit Article Edited by Slayersid18, Sondra C, Glutted, Amy Bright and 30 others Demo stands for demonstration, which is exactly what it is - a demonstration of your band's songs. 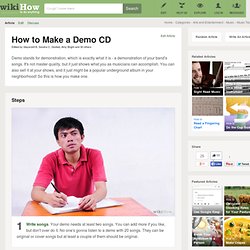 It's not master quality, but it just shows what you as musicians can accomplish. You can also sell it at your shows, and it just might be a popular underground album in your neighborhood! So this is how you make one. Ad Steps 1Write songs. 6Keep the tracks down to two or three, nobody will listen to your demo CD if you provide your epic 20-track mega collection that has ten minute solos on each track.

Tips Always get the deal in writing.Let your engineer know your plan ahead of time so he can prepare the studio before you arrive to record.When doing home recording there will be a lot of problems initially. 6 Steps to Sending the Perfect Demo Submission. You just finished a smashing new track and want to send it to a record label! 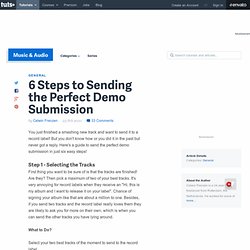 But you don't know how or you did it in the past but never got a reply. Here's a guide to send the perfect demo submission in just six easy steps! Step 1 - Selecting the Tracks First thing you want to be sure of is that the tracks are finished! Are they? What to Do? Select your two best tracks of the moment to send to the record label. Quote to Make Your Day Step 2 - Preparing for Sending Time to prepare the tracks for sending them out.

Render your finished track as an MP3 in a minimum of 128 kb/s! Step 3 - Uploading The times that you had to send a CD with full biography and discography to a record label are far behind us. As you might know there are a million file sharing sites out there, like YouSendit f.e., which are entirely free to use. Important: Do not upload your track to your MySpace or Soundcloud account to use for demo submissions. TrackTesting - Record Labels & Record Companies- Send Music Now!