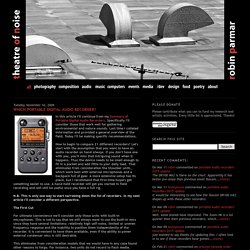 Specifically I'll consider those that work well for gathering environmental and nature sounds. Last time I collated information and provided a general overview of the field. Today I'll be making specific recommendations. How to begin to compare 21 different recorders? Let's start with the assumption that you want to have an audio recorder on hand always. N.B. For ultimate convenience we'll consider only those units with built-in microphones. This eliminates from consideration models that we would have in any case found other reasons to forgo.

And then there's the Marantz PMD620 which has a strange issue of headphone latency and only permits record levels to be set when it is paused. Finally, the Samson Zoom H4 will not be considered in favour of its updated unit, which fixes many flaws including the lack of direct record level control. Criteria. Zach’s Recorder Recommendations. Mid-Side (MS) Mic Recording Basics.

Recording with the Mid-Side Microphone Configuration. When most people record audio in stereo, they usually go to the most common mic configurations, such as a matched pair of microphones arranged in an X/Y pattern, or possibly those same matched mics in an ORTF pattern for a wider stereo field. 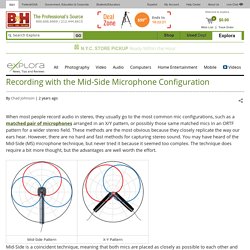 These methods are the most obvious because they closely replicate the way our ears hear. However, there are no hard and fast methods for capturing stereo sound. You may have heard of the Mid-Side (MS) microphone technique, but never tried it because it seemed too complex. The technique does require a bit more thought, but the advantages are well worth the effort. Mid-Side is a coincident technique, meaning that both mics are placed as closely as possible to each other and the stereo image is created by differences in loudness rather than time delays, on which other stereo miking methods rely. History The MS miking technique theory was patented in 1934 by Alan Blumlein, but was not used widely until Danish Advantages Applications Gear Decoding.

Portable Digital Recorder Comparison. Recording/Interviewing Is there a definitive field recorder we think you should buy? 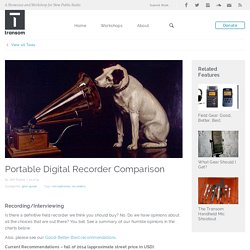 No. Do we have opinions about all the choices that are out there? You bet. See a summary of our humble opinions in the charts below. Field Gear: Good, Better, Best. Intro from Jay Allison: LAST UPDATED: DECEMBER 2014 Okay, we finally did it. 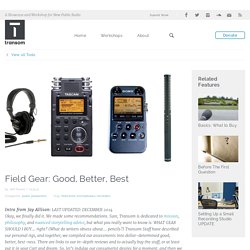 We made some recommendations. Sure, Transom is dedicated to mission, philosophy, and nuanced storytelling advice, but what you really want to know is: WHAT GEAR SHOULD I BUY… right? (What do writers obsess about… pencils?) Transom Staff have described our personal rigs, and together, we compiled our assessments into dollar-determined good, better, best-ness. There are links to our in-depth reviews and to actually buy the stuff, or at least put it in your Cart and dream. Microphones for nature recording II.: different microphones for different situations - Wild Mountain Echoes. Here I present some examples of microphones and related equipment to use for different recording situations. 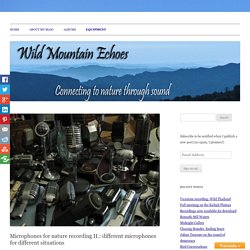 This is not an endorsement of any products, but rather examples to give you an idea of where to start your research. Note that I have only included microphones suitable for field recording, and I have not included USB mics, as most are designed for studio recording. For a background on microphone types and arrays, click here. Single species recording. For recording single species, you generally want to limit the sounds to the side and rear of the microphone. Bioacoustics - Microphone Input Noise Comparison. Microphone Input Noise Comparison The various manufacturers of portable audio recorders often use different and confusing specifications for their products that might prevent an reliable and objective evaluation of their capabilities for recording soft animal sounds in the field. 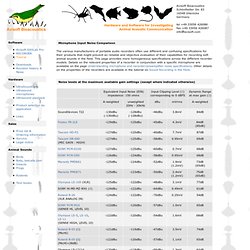 This page provides more homogeneous specifications across the different recorder models. Details on the relevant properties of a recorder in conjunction with a specific microphone are available on the page Understanding microphone and recorder/preamplifier noise specifications. Other details on the properties of the recorders are available in the tutorial on Sound Recording in the Field. Noise levels at the maximum available gain settings (except where indicated otherwise) Noise Performance Test Sound Files Due to the incompatible phantom power voltage of the M-Audio MicroTrack 24/96 (30 Volt only), the MKH60 microphone provides a very poor noise floor with that recorder. A Beginner's Guide to Field Recording, Pt 1. Field recording seems a dark art to many sound designers and composers, yet it is one way to create rich libraries of original material. 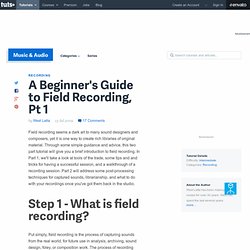 Through some simple guidance and advice, this two part tutorial will give you a brief introduction to field recording. In Part 1, we'll take a look at tools of the trade, some tips and and tricks for having a successful session, and a walkthrough of a recording session. Part 2 will address some post-processing techniques for captured sounds, librarianship, and what to do with your recordings once you've got them back in the studio. Put simply, field recording is the process of capturing sounds from the real world, for future use in analysis, archiving, sound design, foley, or composition work. Field Recording-part 3. Stereo Mic Technique Many sounds are more compelling when captured in stereo. 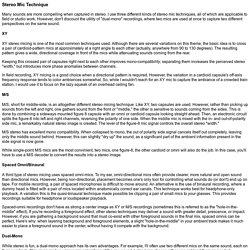 I use three different kinds of stereo mic techniques, all of which are applicable to field or studio work. However, don't discount the utility of "dual-mono" recordings, where two mics are used at once to capture two different perspectives on the same sound. XY stereo micing is one of the most common techniques used. Although there are several variations on this theme, the basic idea is to cross a pair of cardioid-pattern mics at approximately at a right angle to each other (actually, anywhere from 90 to 130 degrees).

Keeping this crossed pair of capsules right next to each other improves mono-compatibility; separating them increases the perceived stereo "width," but introduces more phase anomalies between channels. In field recording, XY micing is a good choice when a directional pattern is required. M/S, short for middle-side, is an altogether different stereo micing technique. Spaced Omni/Binaural. Field Recording Documentary Film: 'The Field Recordist' SASLab Pro Tutorial.