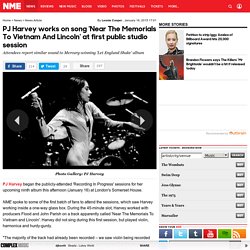 NME spoke to some of the first batch of fans to attend the sessions, which saw Harvey working inside a one-way glass box. During the 45-minute slot, Harvey worked with producers Flood and John Parish on a track apparently called 'Near The Memorials To Vietnam and Lincoln'. PJ Harvey Revealed How She Recorded New Album; Fans Excited For Her Release. What Does PJ Harvey Have In Store For Her New Album? Fans Of ‘Let England Shake’ Artist Reveals Her Recording Process. PJ Harvey. Recording in Progress Silent Auction and Memorabilia This special portrait was commissioned exclusively by Somerset House and Artangel to mark PJ Harvey’s Recording in Progress and was taken by award-winning photographer and filmmaker Seamus Murphy in the ‘Deadhouse' catacombs beneath the courtyard of Somerset House. 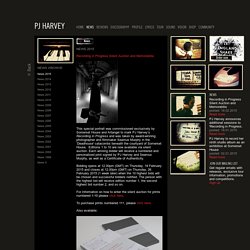 Editions 1 to 10 are now available via silent auction. Each winning bidder will receive a numbered and personalised print signed by PJ Harvey and Seamus Murphy, as well as a Certificate of Authenticity. Bidding opens at 12.00pm (GMT) on Thursday, 19 February 2015 and closes at 12.00pm (GMT) on Thursday, 26 February 2015 (1 week later) when the 10 highest bids will be chosen and successful bidders notified. The person with the highest bid will receive edition number 1, the second highest bid number 2, and so on. For information on how to enter the silent auction for prints numbered 1-10 please click here. To purchase prints numbered 11+, please click here. Also available: PJ Harvey s’expose en studio.

PJ Harvey on the Resonance of Recording Spaces - AnOther Thing I Wanted to Tell You. "Recording spaces are hugely significant for me. 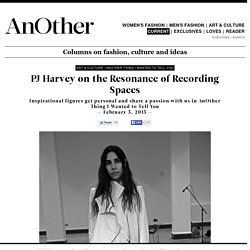 The acoustics of a particular space are inevitably captured in the sound of the recordings – but more than that, the resonance of the building on a different level – its atmosphere, its character. We made the last album, Let England Shake, in St. Peter’s Church in Eype, Dorset. It is magical, on a clifftop looking over the sea, battered by the wind, surrounded by graves and bent trees. There was something very special about that place and you can hear it on those recordings. To Bring You My Love was made in one of the old Townhouse recording studios, no longer in use, near Battersea Power Station. Brian Eno once noted that in the 1960s, when the recording studio took off as a key tool in the music making process, it was "the kids from art school who knew how to use it, not the kids from music school. PJ Harvey se met à nu pour son nouvel album. On y était : en studio avec PJ Harvey. Peep show Harvey. London studio Julia discusses its PJ Harvey Recording in Progress graphics. 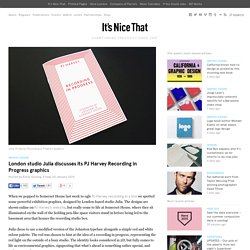 The designs are shown online on PJ Harvey’s website, but really come to life at Somerset House, where they sit illuminated on the wall of the holding pen-like space visitors stand in before being led to the basement area that houses the recording studio box. Juila chose to use a modified version of the Johnston typeface alongside a simple red and white colour palette. The red was chosen to hint at the idea of a recording in progress, representing the red light on the outside of a busy studio. The identity looks considered in 2D, but fully comes to life as environmental graphics, signposting that what’s ahead is something rather special, and rather unusual. Is it art? Is it performance? Or is it just PJ Harvey being ace, in a box? While we wait to take our turn to become a sort of strangely sanctioned voyeur as PJ Harvey records her ninth album, thinking about what’s ahead feels peculiar. 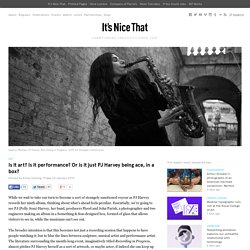 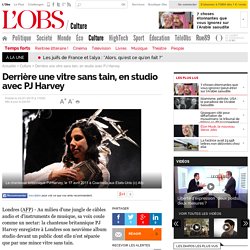 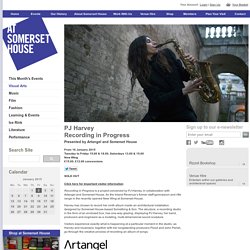 Reviewed! PJ Harvey: Recording In Progress, Somerset House, London, January 20, 2015, 1300-1345. 1240: By the entrance to Somerset House on Waterloo Bridge, there is a shop called Knytta, where one can "create your own unique jumper and see it made in front of you. 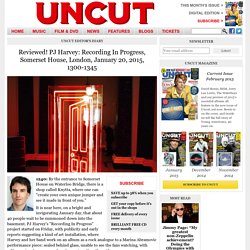 " It is near here, on a bright and invigorating January day, that about 40 people wait to be summoned down into the basement. PJ Harvey's "Recording In Progress" project started on Friday, with publicity and early reports suggesting a kind of art installation, where Harvey and her band work on an album as a rock analogue to a Marina Abramovic performance piece: sealed behind glass, unable to see the fans watching, with self-consciously suppressed excitement on the other side. 1245: We are admitted, past a glowing door sculpture, into a grand anteroom, smelling of paint. Here you can buy postcards (£1.50), signed posters (£25; not a bad deal), and photographs by Harvey collaborator Seamus Murphy (£300). Lyric sheets are £50 each. 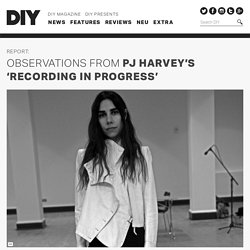 Anyone stepping into the room - a gloomy, dimmed area with view of this one-way glass cube that acts as a studio - would think they were witnessing a ‘finishing touches’ process. As the forty-five minutes run, what begins as a perfectly good track ends up a near-hopeless mush, a dissolved version of its original state. The chords are gone. The melody’s been sunk in one new idea after the other. And everyone has to start over again. It’s testament to just how much of an excruciating process recording an album really is. 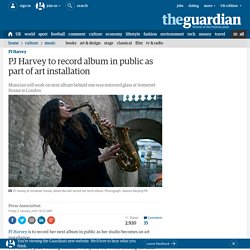 The Mercury-prize-winning musician will spend four weeks creating her ninth album with her band and production team behind one-way-mirrored glass at Somerset House in London. The Recording in Progress project will be staged in a box in a recently opened wing of the venue and has been described as “a mutating, multidimensional sound sculpture”. Harvey’s last release, 2011’s Let England Shake, a collection of songs inspired by conflicts around the world, was her second Mercury winner, taking the prize for the best album of the year a decade after Stories from the City, Stories from the Sea was honoured. Harvey said: “I want Recording in Progress to operate as if we’re an exhibition in a gallery. I hope visitors will be able to experience the flow and energy of the recording process.”