How the Universe Works: Stephen Hawking’s Theory of Everything, Animated in 150 Seconds 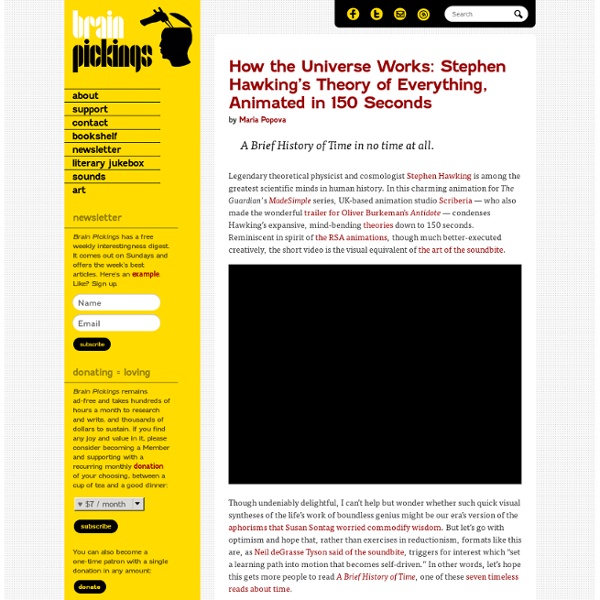 Manufactured Landscapes Manufactured Landscapes is a 2006 feature length documentary film about the work of photographer Edward Burtynsky. It was directed by Jennifer Baichwal and is distributed by Zeitgeist Films. Subject matter[edit] The film involves the photographs and videos of photographer and visual artist Ed Burtynsky's trip through landscapes that have been altered by large-scale human activity, captured with Super-16mm film.[1] Most of the photographs featured in the film are pieces that are exhibited all over the world are taken with a "large format field camera on large 4x5-inch sheet film and developed into high-resolution, large-dimension prints (of approximately 50x60 inches)"[2] While some would some call the his work beautiful, his main goal was to challenge notions while raising questions about the of interplay of environmental ethics and aesthetics. Critical reception[edit] Although most have praised the film, there has been some negative reception. Awards[edit] See also[edit] References[edit]

Videos / What Was The Miller-Urey Experiment? - Stated Clearly Description This animation was sponsored by the Center for Chemical Evolution, NSF, and NASA: The Miller-Urey experiment was the first attempt to scientifically explore ideas about the origin of life. Stanley Miller simulated conditions thought be common on the ancient Earth. The experiment was a success in that amino acids, the building blocks of life, were produced during the simulation. Scientists now have reason to believe that the gases used in the Miller-Urey simulation were not actually the same as those of the ancient atmosphere. Many questions about the origin of life remain to be answered but these findings give strong support to the idea that the first living cells on Earth may have emerged from natural chemical reactions. The Miller-Urey Experiment: Original Paper from 1953 (free access to full paper) Biomolecules found in meteorites: Biomolecules form in asteroid simulations: Scientific Paper (free access to abstract only) ​Biomolecules form in Volcanic Simulations:

Those Who Make A film by Stefan José Instagram: @_stefanjose_ The Artisan Press, Byron Bay. artisanpress.com.au/ As the morning sun breaks through popcorn cloud on Australia's most easterly point, soft infectious rhythms roll out of a small studio in the Byron Arts and Industry estate. As a leader of the letterpress revival in Australia, The Artisan Press has been playing the letterpress tune since 1999. Our People The Artisan Press owner, Wayne Davis, is an award winning printer who served his apprenticeship in the 1980s with Australia’s leading music industry printer, Z. Wayne's print background covers offset, letterpress, intaglio, screenprinting, digital, real pre-press (plate-making, screens, negatives), finishing and binding, photography, graphic design and typesetting.

Meet Dreadnoughtus, The 'Astoundingly Huge' Dinosaur Discovered In Argentina Say hello to Dreadnoughtus schrani, a newly discovered dinosaur that was so formidable, it was named after a battleship that prowled the seas during the early 20th century. "It is by far the best example we have of any of the most giant creatures to ever walk the planet," Dr. Kenneth Lacovara, a paleontologist at Drexel University's College of Arts and Sciences and the scientist who discovered the skeleton, said in a written statement. "With a body the size of a house, the weight of a herd of elephants, and a weaponized tail, Dreadnoughtus would have feared nothing." The titanosaur's skeleton, which dates back 77 million years, was discovered in Southern Patagonia in Argentina, and unearthed over the course of four digs between 2005 and 2009. Rendering of the massive Dreadnoughtus schrani. At 85 feet long and weighing 65 tons, Dreadnoughtus sets a new record as the land animal with the greatest calculable weight. Dr.