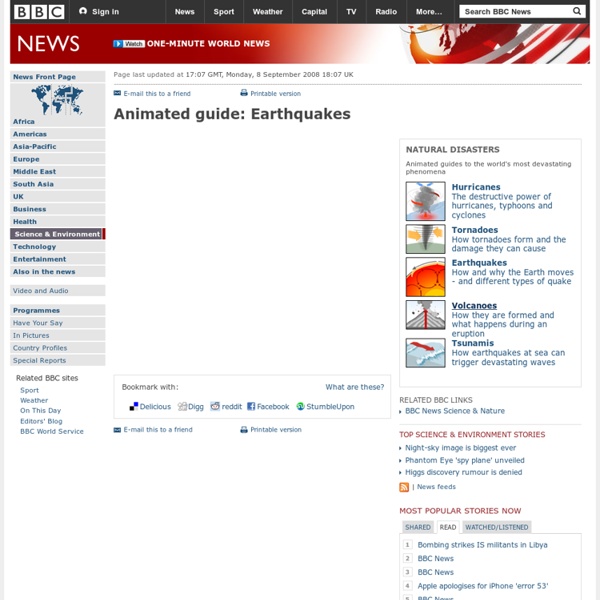 Why Was the Destruction So Severe? | Inside Disaster: Haiti Six weeks after the Haiti shock, Chile was struck by an 8.8-magnitude earthquake. It was 500 times more powerful than the Haiti quake, yet killed less than 1% of the Haitian total. In this section, we explore answers to the question: why was the Haiti earthquake so destructive? This Flash piece is 525 x 372. To embed it in your site, copy and paste the following code. <script type="text/javascript"> var file="destruction_slideshow.swf"; var width = 525; var height = 372; </script><script type="text/javascript" src=" Too wide? Click on images below to launch related videos. Building Codes “The poverty in Haiti lends itself to people building where they want, how they can … not everybody’s going to be able to build to the exacting standards that a building code requires.” Unlike in other countries located on or near fault lines, very few of Haiti’s buildings were constructed for earthquake resistance. Construction Materials Learn More

Shaking Intensity It is a modern human tendency to focus on the number of an earthquake—specifically, the magnitude, or what people used to call the “Richter scale.” But the destruction from a quake usually has more to do with location and timing. Such was the case with the earthquake in Christchurch, New Zealand, on February 22, 2011. A September 2010 earthquake centered 40 kilometers (25 miles) west of Christchurch, in the plains near Darfield, struck at 4:35 a.m., had a magnitude of 7.1, and caused some structural damage and one death (by heart attack). The earthquake in February 2011 occurred at 12:51 p.m. and just 10 kilometers (6 miles) from the center of Christchurch. The natural-color image above was captured on March 4, 2011, by the Advanced Land Imager (ALI) on NASA’s Earth Observing-1 (EO-1) satellite. The deeper the red color of the circle, the more intense the “peak ground acceleration,” or shaking of the earth. There are two forms of energy that cause the shaking in an earthquake.

History of deadly earthquakes Image copyright Getty Images Earthquakes have claimed hundreds of thousands of lives in the last 100 years, and improvements in technology have only slightly reduced the death toll. 25 April 2015 A 7.8-magnitude earthquake kills more than 8,000 people and leaves hundreds of thousands homeless, in the worst natural disaster to strike Nepal since 1934. In some parts of the country, the quake flattens 98% of all homes in hillside villages. 3 August 2014 Approximately 600 people are killed in a 6.1-magnitude earthquake that strikes Yunnan province in China. 15 October 2013 More than 200 people are reported to have died after a magnitude 7.2 earthquake strikes centrally-located Bohol and Cebu in the Philippines. 25 September 2013 More than 300 people are killed as a 7.7-magnitude quake flattens entire villages in Pakistan's remote south-western province of Balochistan, mainly in the district of Awaran. 20 April 2013 11 August 2012 23 October 2011 11 March 2011 22 February 2011 14 April 2010 6 April 2009

KS3 Bitesize Geography - Plate tectonics : Revision, Page 5 What is an Earthquake Introduction to Earthquakes & Tsunamis Turn on the TV or read the newspapers and almost always there is something devastating happening somewhere as a result of sheer nature's power. Examples of such natural occurrences are hurricanes, tornados, wildfires, volcanic eruptions, flooding, earthquakes and tsunamis. These are usually not caused directly by humans, but their effects live with us for a long time. In this lesson we shall look at one of such natural occurrences...earthquakes! What is an Earthquake? Simply, earthquakes are the rumblings, shaking or rolling of the earth's surface. Earthquakes come in many forms. Foreshocks, Mainshocks and Aftershocks: Sometimes, there are smaller shocks that occur before (foreshock) and after (aftershock) a main earthquake (mainshock). Earthquakes are also called temblors. It is important to understand the earth’s makeup to help understand earthquakes better. The Mantle is semi-molten rock, also called magma.

Earthquakes And Tsunamis Almost every year, a large earthquake occurs somewhere in the world and captures the public's attention. Meanwhile, every day thousands of smaller tremors often go unnoticed by most people. Although we usually consider the ground to be solid and stable, the earth is, in fact, constantly shifting under our feet. What causes earthquakes? Earth's crust ranges from 3 to 45 miles deep (5 to 70 kilometers). The crust is a thin, hard shell that floats on the denser, hotter rock of the mantle. As they slide past one another, the tectonic plates snag on rough patches of rock. An earthquake occurs when the pressure built up along a fault becomes stronger than the pressure holding the rocks together. Even though the tectonic plates slide at a regular rate over time, the way that faults release stored energy is different with each earthquake, said Shimon Wdowinski, a geophysicist at the University of Miami's Rosentiel School of Marine & Atmospheric Sciences. Tsunamis Measuring earthquakes

BBC Nature - How animals predict earthquakes 1 December 2011Last updated at 01:53 By Victoria Gill Science reporter, BBC Nature Can pond-dwelling animals pick up pre-earthquake signals? Animals may sense chemical changes in groundwater that occur when an earthquake is about to strike. This, scientists say, could be the cause of bizarre earthquake-associated animal behaviour. Researchers began to investigate these chemical effects after seeing a colony of toads abandon its pond in L'Aquila, Italy, in 2009 - days before a quake. They suggest that animal behaviour could be incorporated into earthquake forecasting. Continue reading the main story “Start Quote When you think of all of the many things that are happening to these rocks, it would be weird if the animals weren't affected in some way” End QuoteRachel GrantThe Open University The team's findings are published in the International Journal of Environmental Research and Public Health. Strange behaviour Continue reading the main story Toad exodus "It was very dramatic," she recalled.

Earthquakes - Q-files Encyclopedia Many earthquakes take place where one tectonic plate slides down beneath in another in what is called a subduction zone. Shock waves are sent out in all directions when, deep under the ground, the locked plates suddenly "give". A subduction zone How an earthquake happens The outer layer of the Earth is made up of a number of giant slabs, called tectonic plates. P- and S-waves travelling through the Earth's interior Shock waves The sudden jolt of a quake usually lasts no more than a few minutes and may be over in just a few seconds. P-waves (1) squeeze and stretch the rocks. P-waves (1) and S-waves (2) Shock waves radiate from the epicentre like ripples on a pond. There are different types of shock waves. Customers in a cafe experience an earthquake. Effects of a quake The shock waves hurtling through the crust cause the ground to shake. A road cracks open along a fault line, with one side slipping down a few centimetres. A road cracks open along a fault line. Unstable ground After an earthquake

Papua New Guinea hit by 7.2-magnitude earthquake A powerful earthquake has struck the South Pacific nation of Papua New Guinea, the fourth strong quake to hit the South Pacific island nation in a week. A local tsunami warning was issued but it was lifted shortly afterward with no reports of damage. The 7.2-magnitude quake struck about 150 kilometres south-west of the town of Panguna on Bougainville Island at a depth of 22 kilometres, the US Geological Survey reported. The Pacific Tsunami Warning Center said tsunami waves of up to 1 metre were possible within 300 kilometres of the epicenter on the coast of Papua New Guinea. There were no reports of damage, said Chris McKee, assistant director of the Geophysical Observatory in the capital, Port Moresby. “The earthquake appears to have not been as big as first estimated,” McKee said. Thursday’s quake was located in a different area of Papua New Guinea than the previous three tremors that rattled the region over the past week, and was therefore an unrelated event, McKee said.

Earthquake Facts And Figures 29 November 2010 What are earthquakes? New Zealand lies on the boundary of the Pacific and Australian tectonic plates. Tectonic plates are large plates of rock, about 100km in thickness, that make up the foundation of the earth's crust and the shape of the continents (like pieces of a giant jigsaw puzzle). There are ten major plates and many more minor ones. Tension builds up as they scrape over, under or past each other. Most (though not all) earthquakes occur at faults, which are breaks extending deep within the earth, caused by the movement of these plates. The fault that caused the Canterbury earthquake on 4 September 2010 has been named the Greendale Fault. Scientists from the Institute of Geological and Nuclear Sciences (GNS) think it is the first time this fault has moved in several thousand years, and it is unlikely that it will move again for another few thousand years. Measuring earthquakes The magnitude is a measure of the amount of energy released by the earthquake. Aftershocks