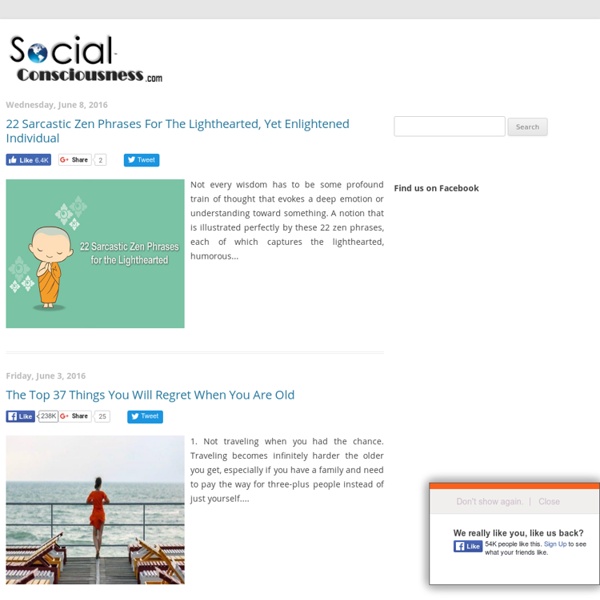 Our brains are by far our most important organs. Here are 10 of the most surprising things our brains do and what we can learn from them: 1. Your brain does creative work better when you're tired. Here's how it breaks down: If you're a morning lark, say, you'll want to favor those morning hours when you're feeling fresher to get your most demanding, analytic work done. Using your brain to solve problems, answer questions and make decisions is...

documentary A documentary about the root causes of the systemic value disorders and detrimental symptoms caused by our current established system. The film details the need to outgrow the dated and inefficient methods of politics, law, business, or any other "establishment" notions of human affairs, and use the methods of science, combined with high technology, to provide for the needs of all the world's people. “If we are genuinely concerned about the environment and the fellow human beings, and want to end territorial disputes, war, crime, poverty, hunger, and the other problems that confront us today, the intelligent use of science and technology are the tools with which to achieve a new direction; one that will serve all people, and not just a select few.” — Jacque Fresco Paradise or Oblivion, by...

Judy’s World: Occupy the Grassy Knoll, Million Man March for JFK in November 2013 by Judy Morris November 22, 1963 – A Day That Will Live in Infamy The 50th anniversary of the murder of President John F. Kennedy at Dealey Plaza, Dallas, Texas will be November 22, 2013. James Douglass, author of the extraordinary ‘must read’ book above, wrote on page 142: We have no evidence as to who in the military-industrial complex may have given the order to assassinate President Kennedy.

Online Jump to Navigation Menu Search The Hustler's MBA I've been saying that college is obsolete for a very long time. I dropped out in 2000, because even back then I could see that it was a really poor value proposition. I didn't predict this because I'm some crazy genius, but because I'm willing to discard emotional attachment and stare plainly at the facts. School is outrageously expensive, leaving graduates with a debt (or net expenditure) of tens of thousands of dollars-- sometimes even one or two hundred thousand.

Spiritual & Healing Practices Home Go to Astrology The Cell Salts - Astrological Tonics by Gretchen Lawlor Editor's Note from Pat Lantz: This article by Gretchen Lawlor has for several years been consistently one of the most read articles on ATH. So, if you've somehow missed I've brought it back to the top for your enjoyment. Homeopathy and astrology have colluded to provide an extraordinary series of astrological tonics, one particularly suited to each of the 12 signs, Aries through Pisces. These are called "homeopathic cell salts" or "biochemical cell salts", and can be used by someone without a medical background to improve the quality of health for themselves, their families and their friends.

Immigrant deaths soar in South Texas FALFURRIAS — Back in October, as Barack Obama and Mitt Romney jousted about immigration issues in the second televised debate, the president made a remarkable assertion about control of the southern border. “The flow of undocumented workers across the border is actually lower than it's been in 40 years,” he said. And indeed, after a decade of increased enforcement that included construction of hundreds of miles of steel border wall and a doubling in size of the U.S.

The School of Life - Developing Emotional Intelligence Know Yourself Prompt Cards These cards are designed to assist us in a journey of self-knowledge; they present us with a range of ideas and questions that can help us to understand ourselves better. £10 Gift E-Voucher An original gift, delivered instantly by email. This electronic voucher can be used across any of our London events or spent in The School of Life online or London shops. £25, £50 or £100. Writing as Therapy Journals Writing is ultimately the task of discovering and developing what we think. There could hardly be a more important personal goal. £15 each.

Kerouac's Breakthrough The following is excerpted from The Voice Is All: The Lonely Victory of Jack Kerouac, published by Viking, 2012. On October 7, 1951, after a gloomy Sunday when he seemed to be making no progress on the chapters about Neal Cassady he was adding to On the Road, Jack went to Birdland to hear the alto saxophonist Lee Konitz, who recently had come into his own as a leading innovator of cool jazz. During Konitz's solo in "I Remember April," which he played as if it were "the room he lived in," his music sounded "so profoundly interior" to Jack that he was sure very few people would understand it. In fact, he compared Konitz's extended phrases to the sentences he was writing lately, sentences whose direction seemed mysterious until the "solution" was suddenly unveiled in a way that shed light backward on everything that had preceded it.

Welcome to Unified Life Sciences About Unified Life Sciences | Statement of Purpose | Multidimensional Design | Who We Are | What We Do | Contact Us Images: Human Design Mandala | Sleep Design Mandala | Angelic Design Mandala | Biology Design Mandala | Multilayer Map | Body Graph | Splenic Center Receive your Free Multidimensional Human Design System Charts, an introduction, and a short free coaching/consultation session with Dr. Equality Under the Law In failing to give due consideration to the proper role of government, both our nation and our state are sliding down the proverbial slope towards what? Less prosperity, lower productivity, higher unemployment, losses of freedom, insurmountable public burdens of debt just to name a few of the maladies associated with impoverished society and to which we are precipitously headed. A prime example of this failure was highlighted in this past Sunday’s New York Times , “ Lines Blur as Texas Gives Industries a Bonanza ” which was originally captioned, “Texas Business Incentives Highest in Nation.”

Exploring the Connected Universe – Delegate Level 1 – Resonance Academy A cutting edge interactive course Exploring the Connected Universe to better our planet through you. Engage with 9 leading faculty members and shift the current paradigm. Embark on a mind-bending journey, connect with 2,000 other travelers and apply this knowledge to transform yourself and our world. This course will TRANSFORM your reality and make you EMPOWERED, CONNECTED and KNOWLEDGEABLE to POSITIVELY IMPACT CHANGE! I have done thirty years of research and – together with a team of brilliant scientists – developed a unified field theory. My mission and the mission of the Resonance Academy is to get this information out to everyone, regardless of their educational background.