Do You Have 1 of the 12 Best Jobs? British Airways' digital billboard identifies planes as they pass overhead (video) Windows Phone 8: Microsoft's breakthrough moment? 21 November 2013Last updated at 07:43 ET By Richard Taylor North America Technology Correspondent Joe Belfiore: "A lot of people would have counted us out" Windows Phone 8 users have often had that sinking feeling of being the stragglers in the smartphone app race. 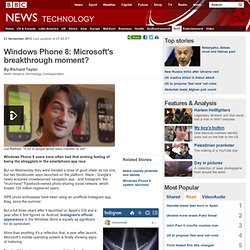 But on Wednesday they were handed a dose of good cheer as not one, but two blockbuster apps launched on the platform: Waze - Google's newly acquired crowdsourced navigation app - and Instagram, the "must-have" Facebook-owned photo-sharing social network, which boasts 150 million registered users. WP8 photo enthusiasts have been using an unofficial Instagram app, 6tag, since the summer. The Instagram Beta app still lacks some video functions But a full three years after it launched on Apple's iOS and a year after it first figured on Android, Instagram's official appearance in the Windows Store is equally as significant for its symbolism. Nearly all the major apps are now available, from Angry Birds to Netflix.

Growing demand. Inside Google’s 1-Million-Square-Foot London Office — 3 Years Before It Opens. Google’s new London office, scheduled to open in 2016, will have an open-air swimming pool, an indoor football pitch, a climbing wall and a roof garden from which to watch trains glide out of Kings Cross station towards Cambridge or Hogwarts. 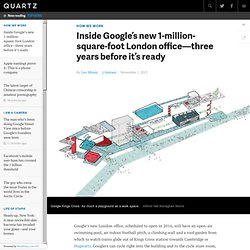 Googlers can cycle right into the building and to the cycle store room, which is equipped with showers and lockers. Somewhere in the interstices, there will also be desks to work on. It’s rarely this lovely in London, but the view of St Pancras is spectacular any time of year. Google Stock Hits $1,000 for First Time Ever. Google is officially part of the ultra-exclusive $1,000 club. 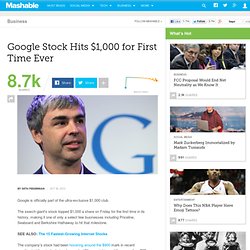 The search giant's stock topped $1,000 a share on Friday for the first time in its history, making it one of only a select few businesses including Priceline, Seaboard and Berkshire Hathaway to hit that milestone. The company's stock had been hovering around the $900 mark in recent months, but the stock shot up by nearly 10% overnight — adding more than $25 billion to its market cap in a matter of hours — following a generally positive third-quarter earnings report, which beat Wall Street estimates for earnings and revenue. GOOG data by YCharts Google's stock has increased by more than $250 since the start of the year, helped by renewed investor optimism that the company has more breakthrough products up its sleeve, including self-driving cars, Google Glass and Google Fiber.

At the intersection of fashion and technology, is retail chief Angela Ahrendts Apple’s next CEO? The magical halo that surrounds Apple hasn’t gone — just yet, anyway. 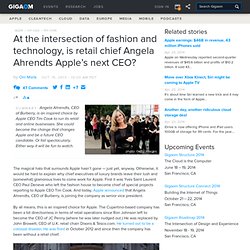 Otherwise, it would be hard to explain why chief executives of luxury brands leave their lush and (somewhat) glamorous lives to come work for Apple. First it was Yves Saint Laurent CEO Paul Deneve who left the fashion house to become chief of special projects reporting to Apple CEO Tim Cook. And today, Apple announced that Angela Ahrendts, CEO of Burberry, is joining the company as senior vice president.

By all means, this is an inspired choice for Apple. The Cupertino-based company has been a bit directionless in terms of retail operations since Ron Johnson left to become the CEO of JC Penny (where he was later nudged out.) It has started to show in earnings results — average store revenues were down to $10.1 million in Q3 of 2013 (when Apple had 405 stores) versus $11.1 million in Q3 2012 (with 367 stores.) British Gas: energy bills price hike turns into PR disaster. British Gas has turned a consumer and political backlash over a 10% increase in energy bills into a public relations disaster after trying to head off criticism of the price hike by using social media. 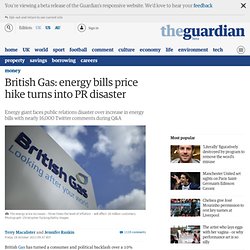 Nearly 16,000 Twitter comments – most of them vitriolic – rained down on Britain's biggest power provider in a few hours after it invited questions from customers. One online expert described the company's attempt to ease public anger over the new tariffs as one of the biggest PR own goals he had ever seen. The energy price increases – three times the level of inflation – will affect 16 million customers and came in for particular condemnation because the parent group, Centrica, had pledged earlier in the year to use windfall profits from last winter to keep prices down. The Next Web - International technology news, business & culture. GTA V Online launches, popularity could cause server issues. 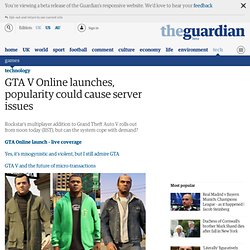 Publishers can buy in vast networks of servers and hire the best software engineers to ensure gamers aren't left out in the cold. But when many thousands hit the infrastructure at once, the results can be wildly unpredictable. Copying fingerprints, Firefox trusted, Facebook not, Yahoo recycles – 60 Sec Security [VIDEO] Computer Security · News · Opinion · Advice · Research.