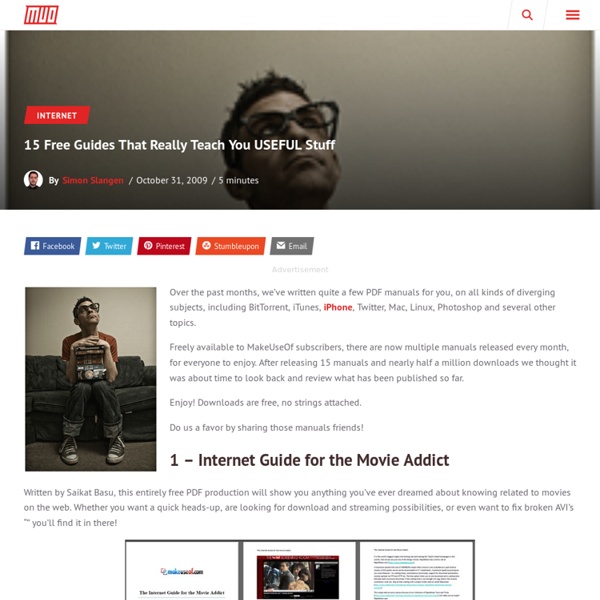 Advertisement Over the past months, we’ve written quite a few PDF manuals for you, on all kinds of diverging subjects, including BitTorrent, iTunes, iPhone, Twitter, Mac, Linux, Photoshop and several other topics. Freely available to MakeUseOf subscribers, there are now multiple manuals released every month, for everyone to enjoy. After releasing 15 manuals and nearly half a million downloads we thought it was about time to look back and review what has been published so far. Enjoy! Do us a favor by sharing those manuals friends! 1 – Internet Guide for the Movie Addict Written by Saikat Basu, this entirely free PDF production will show you anything you’ve ever dreamed about knowing related to movies on the web. Original Post | Download NOW 2 – Internet Guidebook for An Audiophile Original Post | Download NOW 3 – The Incredible Free Manual for Every Mac User Original Post | Download NOW 4 – The Underground Guide to the iPhone Written by Stefan Neagu. Update: The guide is no longer available.

10 Verbal Communication Skills Worth Mastering Last week I read a blog post 7 Personal Branding Predictions for 2011 by personal branding expert Dan Schawbel. One of his seven predications for 2011 was that soft skills will become more important than hard skills. Dan said, “When enough people have similar talents, and are competing for the same positions and opportunities, the real differentiator is your interpersonal skills. The way you present yourself, how you communicate with other people, whether it’s in an interview or with management at work, can make or break your personal brand. Schawbel then went on to highlight a new research report by Kelly Services conducted with 134,000 people. This made me ask myself, “What are some of the top verbal communication skills that people need to master if they want to stand out from their competitors.” Below are my top 10 verbal communication tips we should all strive to master. 1. 2. 3. 4. 5. 6. 7. 8. 9 Be concise. 10. Bonus Tip: Verbal Modeling. Related Posts: What’s Your Brand?

P-III autopsy & Sciency stuff For teaching a course I needed to take a closer look at a CPU. I asked around and got my hands on an old P-III Coppermine that was about to get thrown out. I’ll start with a disclaimer: I know virtually nothing about CPUs, so if I claim something to be true, it probably isn’t. The first challenge is to get the actual silicon processor chip off of the plastic bonding board. Click images for full-size. The blue part in the middle is the actual Si chip. Back side of the circuit board containing the CPU. I figured I should be able to remove the chip by heating it. A saw comes in handy sometimes... Below you can see the result. A piece of the processor chip came off. This is the piece that came off. Now the interesting part begins. This is a piece of the processor. Looking closer, we start seeing some structure inside the holes. A processor contains many layers of metal leads in order to connect the transistors at the surface of the silicon chip into useful units. Focus is on upper layer.

64 Things Every Geek Should Know & Caintech.co.uk - StumbleUpon If you consider yourself a geek, or aspire to the honor of geekhood, here’s an essential checklist of must-have geek skills. The term ‘geek’, once used to label a circus freak, has morphed in meaning over the years. What was once an unusual profession transferred into a word indicating social awkwardness. As time has gone on, the word has yet again morphed to indicate a new type of individual: someone who is obsessive over one (or more) particular subjects, whether it be science, photography, electronics, computers, media, or any other field. A geek is one who isn’t satisfied knowing only the surface facts, but instead has a visceral desire to learn everything possible about a particular subject. A techie geek is usually one who knows a little about everything, and is thus the person family and friends turn to whenever they have a question. 2. If you rolled your eyes here, that is a good thing. 1. 3. 4. 5. 6. 7. 8. 9.

How to Crack a Wi-Fi Network. | Arrow Webzine - StumbleUpon 1.Back Track Today we’re going to run down, step-by-step, how to crack a Wi-Fi network with WEP security turned on. Dozens of tutorials on how to crack WEP are already all over the internet using this method. Seriously—Google it. Unless you’re a computer security and networking ninja, chances are you don’t have all the tools on hand to get this job done. * A compatible wireless adapter—This is the biggest requirement. * A BackTrack 3 Live CD. * A nearby WEP-enabled Wi-Fi network. * Patience with the command line. To crack WEP, you’ll need to launch Konsole, BackTrack’s built-in command line. First run the following to get a list of your network interfaces: The only one I’ve got there is labeled ra0. Now, run the following four commands. {*style:<i>airmon-ng stop (interface) ifconfig (interface) down macchanger –mac 00:11:22:33:44:55 (interface) airmon-ng start (interface) </i>*} Now it’s time to pick your network. To see a list of wireless networks around you. You’re almost there. </b>*} 3.

6 Beneficial Things They Made You Stop Doing in School It's easy to think of a classroom as a battle of wills between kids who want to dick around all day and teachers who actually want to make them learn. But it's not that simple. A lot of the things that will get you yelled at in a classroom are, in fact, beneficial to learning. They're just really annoying to other people (and the teacher). Consider this the next time you hear ... #6. Getty Teachers must look at the cell phone as the modern plague on their profession. Getty"You can have it back at the end of the semester, if it doesn't sell on eBay." But teachers have a reason to hate texting above even other high-tech time-wasters like portable games. Everybody should stop and take a deep breath, because texting actually improves both your language skills and your ability to pay attention in class. Getty"Holly balls, I understand calculus!" Wait, What? Yes, you read that right. Mark van LaereIt's not Hemingway, but it is a form of literacy. Sounds counter-intuitive? #5. Right. #4.