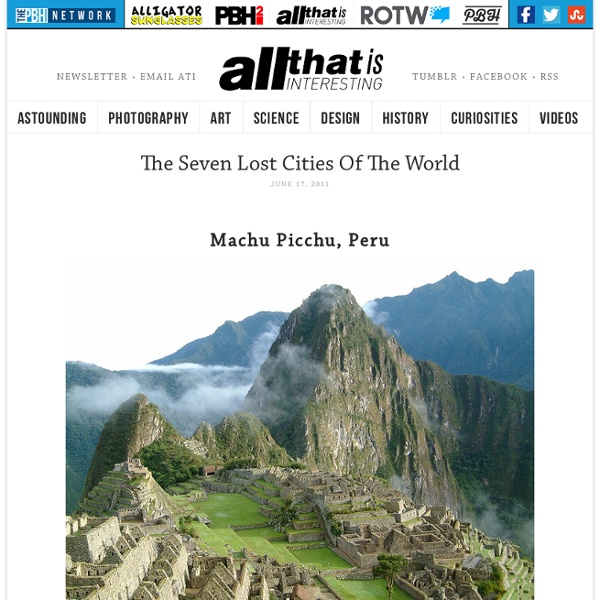 Located on a mountain ridge above the Urubamba Valley, Machu Picchu was the ‘Lost City of the Incas’, inhabited in the 15th and 16th century. Archaeologists believe that the mountain estate was built for the Inca emperor, Pachacuti, but was abandoned because of the Spanish Conquest. The inhabitants were also believed to have been wiped out by smallpox introduced by Spanish conquistadors, leading to Machu Picchu becoming one of the lost cities of the world. The actual ruins were discovered centuries later, in 1911, by American historian, Hiram Bingham.

Marvel at the Magnificent Marble Caves [35 PICS] - StumbleUpon Can you imagine something happening that would endanger these exquisite azure caverns? It might if Chile continues with plans to build five hydro-power dams in Patagonia. Photo #7 by © Jorge Leon Cabello The water has eroded the marble to create cavities and marble caves. Amazing geological formations on Chilean side of Lake Carrera. It would be a real shame if the hydro-power dams damage the lake and the marble caves on top of the surrounding natural habitats for wildlife. View of the lake and where to find the marble caverns in the Aysen region of Chile. The cheapest places to live in the world. $500 a month - StumbleUpon Are you tired of busy cities, crowded streets, high rents and almost non-affordable mortgage? Well...there are places in the world where you can live well for less. The cheapest places to live are also the most beautiful and exotic destinations. So why not make your dreams come true, pack your bags and move to one of those paradise locations, if not for a lifetime, then at least for a year or two? There are two simple rules to follow while searching for low cost destinations. Firstly: if you find a place cheap enough to travel to, then most probably you will also find it cheap to live in. Have you ever been to Thailand? Chang Mai by Dj Badly Cooking at home will cost you nothing as fruits, vegetables and meat at the local markets fall into the budget category. Thinking about Cambodian history, the bloody regime of Pol Pot and poverty, no one would dare to call the country a paradise, but in terms of living cost Cambodia rivals Thailand. Getting around by tuk tuk. P.S.

- Living Bueno - How to Live Anywhere in the World for&Free - StumbleUpon Skeptical Face Travel for free? This dudes crazy right? Today is part two of what I am calling the "Knowledgeable Nomads" series, in which I will be teaching my readers how they can travel the world while ballooning their savings accounts rather than draining them dry. Possibly the most common excuse I hear when urging others to travel and see the world, is the financial barrier that is separating them from partaking in such a journey. How To Live Anywhere in The World For Free By- Rick A. Letter from Franco, my host from my upcoming voyage to Sicily: "Rick, sounds good, I do have a couple of people here, what I could do is give you the country cottage and that way you can have the freedom to do your writing. would you be interested in that?" Franco For the next few months I will be living in a country cottage in Sicily a few hundred meters from the village of Sciacca. I was naturally skeptical and figured I'd come across a salesman promoting his own website in a clever way. 1.

Plitvice Lakes National Park, Croatia | Beautiful Places to Visit - StumbleUpon The stunning Plitvice Lakes National Park lies in the Lika region of Croatia. The park is surrounded by the mountains Plješevica, Mala Kapela, and Medveđak, which are part of the Dinaric Alps. The 16 blue-green Plitvice Lakes, which are separated by natural dams of travertine, are situated on the Plitvice plateau. Waterfalls connect the lakes, and the tallest waterfall is Veliki Slap at 70 meters (230 feet) tall.

Currency Exchange Rate Conversion Calculator The Hamilton Pool Nature Preserve in Texas - StumbleUpon Oct 3, 2011 Located approximately 30 miles (48 km) southwest of Austin, Texas, the Hamilton Pool Preserve is a historic swimming hole which was designated a preserve by the Travis County Commissioner’s Court in 1990. Located 3/4 mile upstream from its confluence with the Pedernales River, Hamilton Creek spills out over limestone outcroppings to create a 50 foot waterfall as it plunges into the head of a steep box canyon. The waterfall never completely dries up, but in dry times it does slow to a trickle. The preserve is home to the Golden-Cheeked Warbler, and a great variety of other birds. A unique natural area surrounds this pool, collapsed grotto and canyon, formed by thousands of years of water erosion.