Coolest Events Around The World 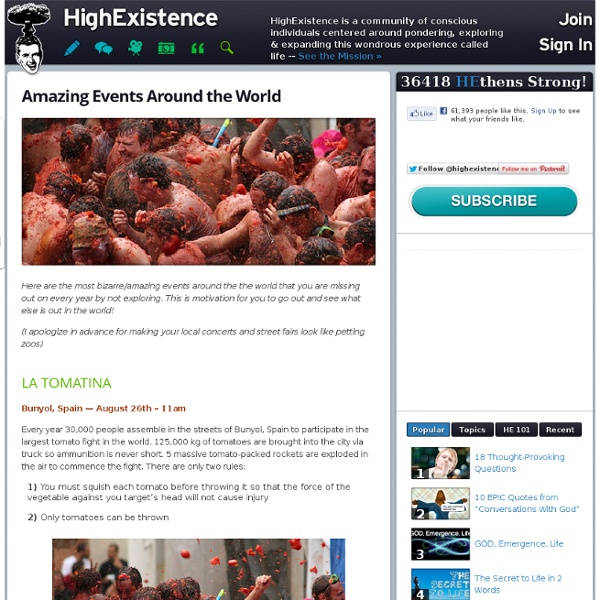 Here are the most bizarre/amazing events around the the world that you are missing out on every year by not exploring. This is motivation for you to go out and see what else is out in the world! (I apologize in advance for making your local concerts and street fairs look like petting zoos) Bunyol, Spain — August 26th – 11am Every year 30,000 people assemble in the streets of Bunyol, Spain to participate in the largest tomato fight in the world. 125,000 kg of tomatoes are brought into the city via truck so ammunition is never short. 5 massive tomato-packed rockets are exploded in the air to commence the fight. 1) You must squish each tomato before throwing it so that the force of the vegetable against you target’s head will not cause injury 2) Only tomatoes can be thrown ‘Black Rock City’, Nevada, USA — September 3rd-5th The official site for Burning Man describes the event as “a city in the desert dedicated to radical self reliance, radical self-expression and art.” Thailand — April 13-15 Related:  Gör Götüm Yolları • DESTINATIONS • Around the world

Complete list of Facebook Chat Emoticons | calebbrown.id.au While playing with Facebook Chat I wondered if it supported emoticons. Turns out it does. But when I tried the >:-) emoticon (a 'devil') and saw it printed as boring text, I wondered, "what smilies does facebook actually support?" So with the help of Safari and some javascript hacking I present to you a complete list of facebook emoticons. smile frown tongue :-P :P :-p :p =P grin gasp :-O :O :-o :o wink glasses sunglasses grumpy unsure cry devil angel kiss heart kiki squint confused o.O O.o upset >:O >:-O >:o >:-o pacman :v curly lips robot Chris Putnam :putnam: Shark Penguin Thumb (Y) (y) Some Facebook users have created their own emoticons for Facebook chat. Here is a collection of some emoticons that are created using user profile images. Rock Sign [[roxsign]] Middle Finger [[midfing]] Enjoy. Updated 21 July 2008: Moved B-) and B) from sunglasses to glasses and cleaned up formatting.

The 16 Reasons You Need To Drop Everything And Travel Right Now There’s a characteristic of our generation that can only be described as severe restlessness. I am not specifically referring to the number of friends you have who are prescribed Adderall; although that’s definitely another cultural trend I could discuss in length. What I’m talking about is a restlessness of the soul, the wandering spirit, a culture of nomads. We’ve been bred on this notion that we are going to do it differently than our parents; we’ll be adventurous, experience life to the fullest. We’ve sat over lunch with our friends choosing our post-graduation plans, always teetering over the line of what we knew as the safe choice and what we knew as the adventurous, spirited one. We talked about living in Brazil in a house by the beach, spending days on the hammock and driving taxis at night. We thought about moving to London, buying expensive rain gear and renting a studio on Piccadilly Circus. You’re young You’re more willing to take risks With less to lose, there’s more to gain.

one of the best days i have ever had. our second photo shoot scheduled in utah.......the models never showed.we were disappointed.and hot.and wendy says "let's do it ourselves!"and we did. this is 7 photographers getting to have a BLAST while the other 11 practiced their action shots in sunlight.that was the point.a COLORFUL shoot....with action and light......ready GO! (all of these photos were taken by Kelley and Kim....both excellent photographers!) this is powder...not paint.it was a little hard to breathe but not bad.it was only bad if it went right in your eyes....but still you could recover....i did....and tyler did too. it was the best time.i LOVED doing it.i laughed and laughed.it was soooo fun! i am so glad the models never showed.it was so much better this way. and it all came off in the shower.:)

The Best of British - The American's guide to speaking British... Ace - If something is ace it is awesome. I used to hear it a lot in Liverpool. Kids thought all cool stuff was ace, or brill. Aggro - Short for aggravation, it's the sort of thing you might expect at a football match. All right? Anti-clockwise - The first time I said that something had gone anti-clockwise to someone in Texas I got this very funny look. Any road - Up north (where they talk funny!!) Arse - This is a word that doesn't seem to exist in America. Arse about face - This means you are doing something back to front. Arse over elbow - This is another way of saying head over heels but is a little more descriptive. Arse over tit - Another version of arse over elbow, but a bit more graphic! Arsehole - Asshole to you. Arseholed - Drunk! As well - You chaps say also when we would say "too" or "as well". Ass - Your backside, but mostly a donkey! Au fait - Another one of those French expressions that have slipped into the English language. Baccy - Tobacco. Biggie - This is unusual.

7 reasons Lisbon could be Europe's coolest city Think they stay out late in Madrid? In nightlife areas such as Bairro Alto, Lisbonites stay out until dawn -- then keep going. Lisbon has some of the world's most fascinating cobbles, a "street art" obsession shown off here in the city's giant mapa mundi. Portuguese writer Fernando Pessoa eloquently summed up the prevailing national outlook: "I'd woken up early, and took a long time getting ready to exist." Portuguese custard tarts have conquered the world. Few European capitals have such easy access to great beaches, like this one at Sintra. Lisbonites have a sharp eye for design, fashion and architecture, such as the Gare do Oriente station. The city is bursting with world-class galleries, including the Oriental and Western collections of the Gulbenkian Foundation. Party stamina World at your feet Expert with the irony Delicious tarts Beaches Style city Art full (CNN) -- What makes a city "cool"? Here's why. 1. If you think Madrid stays out late, try a night out in Lisbon. Lisbon: color equals cool.

Snorkel with whale sharks and whales - scuba dive and snorkel with whales and whale sharks You float quietly, until the humpback whale senses you are there and swims toward you. Or, you're snorkeling and suddenly a whale shark, one of the world's biggest fish, rises from below to eye you. Either way, it's an experience to cherish and remember. Several companies around the world offer these special experiences. EcoColors Offers Snorkeling With Whale Sharks in Mexico EcoColors Tours EcoColors offers the chance to snorkel with whale sharks, one of the world's biggest fish, off the coast of the Yucatan Penninsula. Aquatic Adventures in the Dominican Republic On an Aquatic Adventures multi-day tour, you can snorkel with 80,000-pound humpback whales that gather in the Sanctuary of the Marine Mammals of the Dominican Republic. Swim Among Dwarf Minke Whales with Dive The Reef in Australia If you intend to dive Australia's Great Barrier Reef, investigate snorkeling and scuba diving in the water with dwarf minke whales. Whaledive.Net

Water Worlds: 15 Real Floating Towns & Ocean Cities There’s only one Venice, but you might be surprised to find that you can get the same scenic and historic feel – complete with canal ‘streets’ and gondoliers – in several other towns across the globe. In fact, there are dozens of picturesque floating villages and islands that are so heavily populated, you can barely tell that there’s land under all the man-made structures. Here are 15 of the world’s most fascinating water-based communities. Santa Cruz del Islote, Colombia (images via: smilepanic, noticiasinteresantes) From above, you can barely see a spot of land on this island, so completely covered is it with houses. Ganvie, Benin (images via: hugo, erik cleves kristensen) The largest lake village in Africa can be found in Lake Nokoué, in the nation of Benin. Ko Panyi, Thailand (images via: wikimedia commons, luxury thailand travel) Loreto Island, Lake Iseo, Italy (images via: jon shave, imgur) Halong Bay Floating Village, Vietnam (images via: andrea schaffer, saragoldsmith) Flores, Guatemala

you knew i was going to make one. they are all over pinterest....(i still am not signed up for pinterest because i don't have time for one more thing but browsing is fun!) so we made one. i took a box of 64 crayons and took out the blacks and browns.i used another small box and doubled up on the good colors i liked and hot glued them to the top of our canvas. then we turned our blow dryer to hot on high. not long after you set the hair dryer by the crayons they get shiny and then the wax starts to melt! and it dries really quickly too. seriously. what could be happier than this?? GREAT project. loved it today is the first FULL day with ALL my kids in ALL day school.yeah...i am smiling as i type that. it's good. it's quiet. i am rockin' it. removing wallpaper.....making code for craft weekend stuff.....doing my hair....going to lunch..... it's all good. hooray for school!

Harry Potter 7.1: The Drinking Game | FM Though it may be hard to believe, it’s already been nine years since Potter-heads around the world were introduced to the silver-screen personalities of Harry, Ron, and Hermione in the movie “Harry Potter and the Sorcerer’s Stone.” Maybe it seems kind of creepy that we’ve been watching them grow up right before our eyes (oh hey, Emma Watson), but we’ve been growing up right alongside them, and now it’s time to celebrate the bittersweet—but still triumphant —beginning-of-the-end. FM thought of no better way to celebrate than to grab our friends and a mug of our favorite wizarding libation (toss-up butterbeer or firewhiskey) and get in touch with our inner spell-caster as we watched “The Deathly Hallows: Part 1.” —Whenever somebody casts a spell, take a sip (take a gulp if Hermione casts it). —If you hear the full name “Harry Potter,” take a sip (two if the person saying “Harry Potter” sounds particularly surprised or confounded). —If somebody casts “Avada Kedavra,” kill your drink.