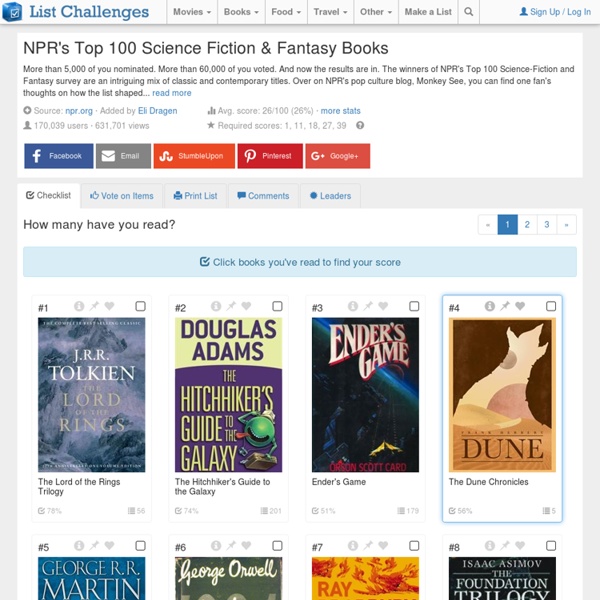 85,951 users · 307,081 views Required scores: 1, 11, 18, 27, 40 How many have you read? Click items you've completed The Lord of the Rings Trilogy The Hitchhiker's Guide to the Galaxy Ender's Game The Dune Chronicles A Song of Ice and Fire Series Fahrenheit 451 The Foundation Trilogy Brave New World American Gods The Princess Bride The Wheel of Time Series Animal Farm Neuromancer Watchmen I, Robot Stranger in a Strange Land The Kingkiller Chronicle Slaughter House Five Frankenstein Do Androids Dream of Electric Sheep? The Handmaid's Tale The Dark Tower Series 2001: A Space Odyssey (novel) The Stand Snow Crash The Martian Chronicles Cat's Cradle The Sandman Series A Clockwork Orange Starship Troopers Watership Down Dragonflight The Moon Is a Harsh Mistress A Canticle for Leibowitz The Time Machine 20,000 Leagues under the Sea Flowers for Algernon The War of the Worlds The Amber Chronicles

10 Fictional Elements From the Entertainment World - Listosaur Nothing drives a science fiction plot along like throwing in a good fictional element or chemical compound or two. And while some purists may decry this as “plot resolution by techno-babble,” a well-crafted fictional element can enhance a created universe and serve as a way to give characters real-world limitations. Every superhero has got to have a strength or weakness, right? Think of Dune, where the galactic economy is linked to the power of the Spice.

House Of Books: The Most Majestically Beautiful Libraries Around The World Photographed By Franck Bohbot There is something special about a big beautiful room full of books. For those that love to read, there is nothing quite as exciting as a magical library, full of mysterious tales and heartwarming stories. French photographer Franck Bohbot loves reading so much he decided to travel the world in search of the most beautiful libraries. Franck recently moved to New York in 2013, and has since traveled near and far in search of exquisite locations to check out a good book and take a stunning photo. Some of the most jaw-dropping libraries he has yet to photograph include Bibliothèque Nationale de France and the Biblioteca Angelica in Rome. Mordor After the destruction of the strongholds of evil in the north of Middle-earth at the end of the First Age, Sauron fled southwards seeking new lands. At the end of the first millennium of the Second Age, he chose a land walled by mountains, and there built his great fortress of Barad-dûr. After Sauron settled there, the land became known as Mordor (the Black Land) - no record of an earlier name for this region exists.

The 9 Most Eerie Books and Grimoires Of All Time (old books, grimoires, black magic, occult, necronomicon, spells, creepy) The Voynich Manuscript Widely considered to be one of the most mysterious manuscripts in the history of Time As Perceived By Mankind, this book contains a ciphered unknown alphabet written on vellum (calfskin) and depicts bizarre plants, original astronomical charts, and odd interconnected bathtubs with tiny naked people. Cryptographers, mathematicians and linguists have been unable to decipher this book. Despite its arcane nature, scholars maintain it was written during the medieval years of 1404 and 1438. Its name comes from antique book dealer Wilfrid Voynich, who bought the book second-hand in Italy in 1912. (Source)

Top 10 Anticipated Fantasy Books For 2012 - Part One Friday, January 6, 2012 Last year we ran an article where we chose our top 10 most anticipated novels for 2011. It proved overwhelmingly popular, amassing just shy of 20,000 hits! 10 Kick-Ass Secret Passage Bookshelves If there’s one dream that unites all bookish folks (aside from, you know, universal literacy) it’s the dream of having a secret passageway hidden behind a bookcase. Ok, maybe it just unites some of us- but there’s no denying that there’s something super-nifty about having a bookcase that moves to reveal a space only you know about. You and your builder. Anywoot! Here’s a roundup of ten of my favorite bookish secret passageways from around the interwebs:

100 Sci-Fi/Fantasy Novels to Geek Out Over - Half Price Books Blog - HPB.com If your answer to every question is 42. If you can quote the three laws of Robotics. If you want to say “my precious” every time you see a gold band. Then this list is for you. Short Stories Online Homepage > Resources > Web Sites > Short Stories Online These Philip K. Dick stories come from Project Gutenberg and are stories that were written early in his career. For more reading formats, visit that site. Only html and text are provided here. Beyond Lies the Wub html text Beyond the Door html text Mr. The 8 Most Stunning Bookstores In The World  By Elizabeth Stamp for Architectural Digest. Tour the most extraordinary bookshops across the globe, from a hidden gem on Santorini to a repurposed church in The Netherlands. El Ateneo Grand Splendid, Buenos Aires, Argentina

David Bowie's 'Space Oddity' Recreated As Children's Book [Read + Listen ComicsAlliance readers should by now be familiar with the work of Andrew Kolb. We’ve spotlighted the illustrator’s work a couple of times before, first for his groovy representations of The Walking Dead and other beloved artifacts of pop culture, and most recently for his work with some of comics, film and television’s most famous double-acts like The Muppets’ Bunson and Beaker and Kevin Smith’s Jay and Silent Bob, but in the style of carved wooden blocks. Kolb’s latest work is more ambitious, telling the story of David Bowie’s classic “Space Oddity” in the style of an illustrated children’s book. The tale of doomed Major Tom plays out in Kolb’s bright and retro animation style, giving a face to the legendary Bowie character and making the conclusion that much sadder.Released in 1969 and considered a classic today, David Bowie’s “Space Oddity” is obviously a reference to Stanley Kubrick’s “2001: A Space Odyssey.”

Superhero Bookends That Save Books From Falling Down Created by the imaginative folks at Israeli design studio, Artori Design, are the Book And The Hero, and Supershelf – a pair of bookends that make it appear the books they’re holding are being saved by a small, yet incredibly strong superhero. The illusion is created by the use of strong magnets, and feature a mini magnetized superhero. Witchcraft, in other words. 10 Great Fantasy Series to Read While You're Waiting for George R.R. Martin's Next Book Marykate, Charlie, you've totally won my love and neverending devotion for including The Farseer in this list. There's a part of me that wants to say it's one of the most under-appreciated fantasy series of all time. If I can throw out some of my recommendations: Melanie Rawn's Sunrunner trilogies (six thick books full of magic, intrigue, romance, and a preponderance of twins, which seems to be some weird fetish of Rawn's.