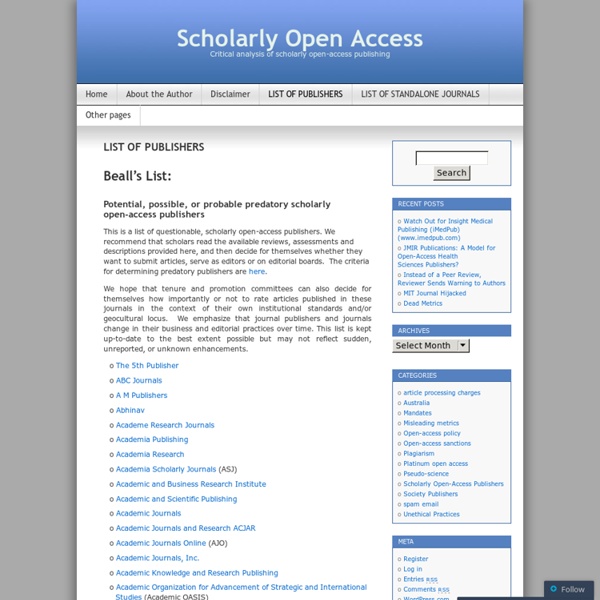 Beall’s List: Potential, possible, or probable predatory scholarly open-access publishers This is a list of questionable, scholarly open-access publishers. We recommend that scholars read the available reviews, assessments and descriptions provided here, and then decide for themselves whether they want to submit articles, serve as editors or on editorial boards. The criteria for determining predatory publishers are here. We hope that tenure and promotion committees can also decide for themselves how importantly or not to rate articles published in these journals in the context of their own institutional standards and/or geocultural locus. Last updated December 28, 2015 Appeals: If you are a publisher and would like to appeal your firm’s inclusion on this list, please go here. Like this: Like Loading... Related:  IL

A Good Way to Create and Save Mind Maps to Google Drive October 25, 2014 MindMup is an excellent web tool that allows you to create beautiful mind maps. Mindmup does not require registration and is very simple to use. It is also integrated with Google Drive so you can save your mind maps straight to your Drive account. MindMup also provide a set of good extensions to enhance your mind mapping. Some examples include: Realtime collaboration: This is a good feature to use with students in class. Progress Progress allows you to manage hierarchies of tasks faster by propagating statuses to parent nodes. Straight lines This extension converts funky curve connectors into straight lines, which makes it clearer to see what connects to what on large maps. When you are done working on your mind maps you can then save them to your Dropbox or Google Drive.

RevEl@Nice : plate-forme pépinière des revues et des actes de colloque électroniques de l'Université Nice-Sophia Antipolis Page d'accueil Special Issue: Community Informatics and Open Government Data | Vol 8, No 2 (2012) In many countries across the world, discussions, policies and developments are actively emerging around open access to government data. It is believed that opening up government data to citizens is critical for enforcing transparency and accountability within the government. Open data is also seen as holding the potential to bring about greater citizens' participation, empowering citizens to ask questions of their governments via not only the data that is made openly available but also through the interpretations that different stakeholders make of the open data. Besides advocacy for open data on grounds of democracy, it is also argued that opening government data can have significant economic potential, generating new industries and innovations. Some open government data initiatives are being led by governments.

SHERPA Do Your Students Know How To Search? The Connected Student Series: There is a new digital divide on the horizon. It is not based around who has devices and who does not, but instead the new digital divide will be based around students who know how to effectively find and curate information and those who do not. Helene Blowers has come up with seven ideas about the new digital divide – four of them, the ones I felt related to searching, are listed below. The New Digital Divide: In an age of information abundance learning to effectively search is one of the most important skills most teachers are NOT teaching. Teachers – especially in the elementary grades -need to develop a shared vocabulary around the skill of searching. Here are some of the searching skills and vocabulary we should be teaching students : Quotation Marks: Students should always use quotes to search for an exact word or set of words. Example: “The Great Chicago Fire” Dashes (or minus sign): Example: Great Chicago Fire -soccer Two Periods: Site Search:

HSC : All My Own Work :: Home Revues.org : portail de revues en sciences humaines et sociales Harlot | A revealing look at the arts of persuasion Yesterday, my Spanish teacher and I were discussing Martín Fierro (1870s), a culturally significant epic poem in Argentina because of its depiction of gauchos. (If you’re not aware, gauchos are kind of like Argentine cowboys. At the time the poem was written, they were a sort of “sub-class” because they were multi-racial, being a mixture between the colonizing Europeans and the indigenous people. Traditionally, they weren’t land owners themselves, but worked with the cows and horses for other ranchers throughout the Pampas region of Argentina). So, when Martín runs off to Patagonia, the book describes this by saying that he goes to “el desierto.” So, this prompted my teacher to pull out a hundred-peso bill. La Conquista del Desierto The image itself depicts Roca and his men expanding and “uniting” Argentina, which pretty much meant killing or displacing the indigenous people living there and allowing more ancestral-Europeans to settle. Why am I telling you all of this?

Gold Open Access: Are APCs changing the the role of the scholarly library forever? One of the most significant differences between traditional journal publishing and open access publishing is that it turns the way that content is funded on its head. Instead of putting content behind the paywall of a subscription, open access journals make the research they publish available to anyone. Open access publishing itself comes in two flavours. The model of asking authors to pay APCs has been the source of continuing debate within the scholarly publishing industry, but it is widely accepted that while many authors do pay these charges themselves a large proportion of these costs are borne by funders. Our sister company PCG’s Open Access Library Survey covered exactly this topic when it questioned librarians in more than 30 countries about how APCs in their institution were funded, and whether these formed part of their library budgets.

How To 'App Smash' And Implement Digital Storytelling On The iPad App smashing, the process of using more than one apps in conjunction with one another to create a final product, is a concept that allows students to create engaging educational projects and illustrate their creativity in multifaceted ways. One of the most gratifying and effective ways to use app smashing in the classroom is to create digital storytelling projects. The concept of digital storytelling is emerging as a form of personal and collective expression of knowledge, ideas, and perceptions. Here is an iPad app smashing activity you can use in your classroom in order to create professionally looking digital storytelling projects. Getting Hands-On: The Project A typical app smashing activity has four steps: First, you start with the end product in mind. Objective To create a Digital Storytelling project that illustrates knowledge in effective and appropriate ways. Apps We Will Use Workflow Short Tutorials Here is a short video on how to use Tellagami Some Final Thoughts

Social Media for Teachers: Guides, Resources, and Ideas Although students are evermore connected to the social web, many of these networks remain out-of-class digital playgrounds where students congregate. In a 2014 survey of 1,000 teachers, just one in five said they use social media regularly with students. Of course, it can be a challenge to incorporate social media into lessons. More Great Reads From Edutopia In addition to those great guides, there is a lot of useful information right here on Edutopia. UNESCO’s Open Access (OA) Curriculum is now online Within the overall framework of the organization’s strategy on OA, the recent launch of OA curricula for Researchers and Library Schools by UNESCO highlights its efforts for enhancing capacities to deal with Open Access issues. The carefully designed and developed sets of OA curricula for researchers and library and information professionals are based on two needs assessment surveys, and several rounds of face-to-face and online consultations with relevant stakeholders. These curricula will soon be converted into self-directed e-learning tools, which will enable users to self-assess their knowledge on Open Access and take a learning pace that is initiated and directed by the learners themselves. UNESCO also aims to strengthen this initiative by translating the OA curricula into several languages that will increase their reach and impact. Curriculum for Library Schools Curriculum for Researchers <- Back to: News articles

13 Things to Remember When Life Gets Rough | By: LifeHack We’ve all gone through hard times. And we all get through them. However, some get through them better than others. So what is their secret? 1. Buddha’s famous saying tells us: “It is your resistance to ‘what is’ that causes your suffering.” 2. Many times, we are our own worst enemy. 3. Your outer world is a reflection of your inner world. 4. You should just wipe the word “failure” right out of your vocabulary. 5. That’s hard to believe sometimes, I know. 6. This moment will never come again. 7. Most people live with “attached mind.” 8. Fear can be a great teacher. 9. Believe it or not, I know way too many people who don’t allow themselves to have fun. 10. But if you do compare yourself, compare yourself with people who have it worse than you. 11. You need to get out of your own way. 12. “And this too shall pass” is one of my favorite sayings. 13. Miracles happen every day. Last featured on Expanded Consciousness