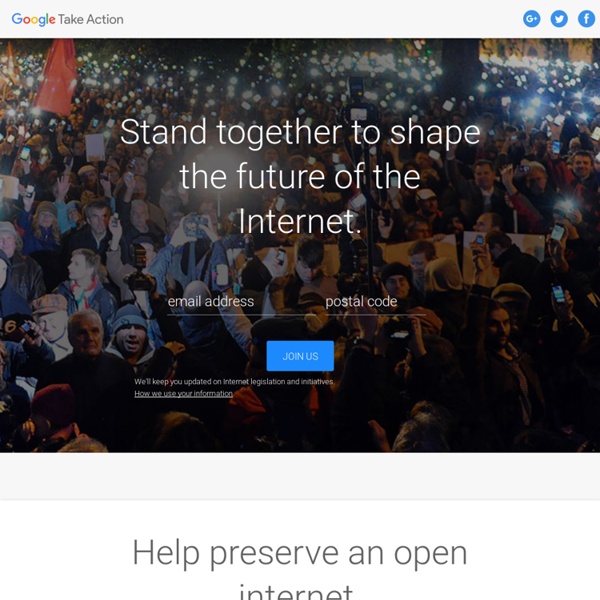 Full text of "Guerilla Open Access Manifesto" Guerilla Open Access Manifesto Information is power. But like all power, there are those who want to keep it for themselves. The world's entire scientific and cultural heritage, published over centuries in books and journals, is increasingly being digitized and locked up by a handful of private corporations. Want to read the papers featuring the most famous results of the sciences? You'll need to send enormous amounts to publishers like Reed Elsevier.

Google is way bigger than you realize Gizmodo has posted a visual representation from Intac showing the approximate number of dedicated servers that major tech companies own. When you speak in terms of numbers, it becomes hard to comprehend just how large these server farms have become. Intel, for example, is estimated to have around 100,000 servers in its arsenal, while Facebook, AT&T, and Time Warner Cable, all fall between 20,000 and 30,000. Who Controls the Internet? The Internet is subject to control because its infrastructure is subject to control Who Controls the Internet? Illusions of a Borderless World is a 2006 book by Jack Goldsmith and Tim Wu that offers an assessment of the struggle to control the Internet.[1] Starting with a discussion of the early vision of a borderless global community, the authors present some of the most prominent individuals, ideas and movements that have played key roles in developing the Internet. As law professors at Harvard and Columbia, respectively, Goldsmith and Wu assert the important role of government in maintaining Internet law and order while debunking the claims of techno-utopianism that have been espoused by theorists such as Thomas Friedman. Overview[edit] The book has three parts.

Google Now Is Watching You I've been getting friendly with the newest features of the Samsung Galaxy Nexus phone, including a feature called Google Now. On the new start slider, when bringing the phone to life, you can slide to the right to go to the phone itself. If you go to the left, you can activate the camera immediately. The Human Future: A Problem in Design Republished from ishmael.org By Daniel Quinn Editor's note: Even though this essay is over 10 years old, it's as relevant today as ever, especially considering that the mass shootings that have become a tragic outlet for wounded human beings has only increased as the years go on. We need to start solving for causes rather than effects if we ever want to see this end. Everyone nowadays is more or less aware that what we see around us in the world of nature is the result of a design process called evolution. This was not always the case of course. For thousands of years in our culture, it was imagined that what we see around us was the work of a divine designer who delivered the finished product in its eternally final form in a single stroke.

8,200+ Strong, Researchers Band Together To Force Science Journals To Open Access Evolutionary biologist Michael Eisen made this t-shirt design in support of the Elsevier boycott. Academic research is behind bars and an online boycott by 8,209 researchers (and counting) is seeking to set it free…well, more free than it has been. The boycott targets Elsevier, the publisher of popular journals like Cell and The Lancet, for its aggressive business practices, but opposition was electrified by Elsevier’s backing of a Congressional bill titled the Research Works Act (RWA). Google Watch - A Blog on Search Engines News and Opinions focused on Google Chrome Remote Desktop App Now Available for Mobile Devices By Todd R. Weiss | Posted: 2014-04-17 Who Controls the Internet? Beyond the Obstinacy or Obsolescence of the State - Eriksson - 2009 - International Studies Review With the Internet being a truly global phenomenon, understanding how this is controlled should yield observations of relevance for the study of global governance more generally. The Internet, and how it is controlled, should therefore be a concern for all students of world politics, and not only for the smaller albeit multidisciplinary community of scholars engaging in “Internet studies.” A first step is to acknowledge that Internet control varies across time, space, and issue-areas. To better understand such complex patterns of governance, we need to go beyond universal generalizations. In an attempt to support the middle-range theorizing, which arguably is needed, this essay introduces and briefly unpacks three analytical questions: What are the key aspects of Internet control?

FAQ – Government requests directed to Google and YouTube What is a content removal request? Governments make content removal requests to remove information from Google products, such as blog posts or YouTube videos. The data includes court orders sent to us to remove content, regardless of whether the court order is directed at Google. For purposes of this Report, we also count government requests that we review particular content to determine if it should be removed for violating a product's community guidelines or content policies. The War Against Teachers as Public Intellectuals in Dark Times (Image: Students in class via Shutterstock)Please support Truthout’s work by making a tax-deductible donation: click here to contribute. A little learning is a dangerous thing. - Alexander Pope Net Neutrality 101 When we log onto the Internet, we take lots of things for granted. We assume that we'll be able to access whatever Web site we want, whenever we want to go there. We assume that we can use any feature we like -- watching online video, listening to podcasts, searching, e-mailing and instant messaging -- anytime we choose.

PageRank Mathematical PageRanks for a simple network, expressed as percentages. (Google uses a logarithmic scale.) Page C has a higher PageRank than Page E, even though there are fewer links to C; the one link to C comes from an important page and hence is of high value.