The Internet Defense League - Protecting the Free Internet since 2012. 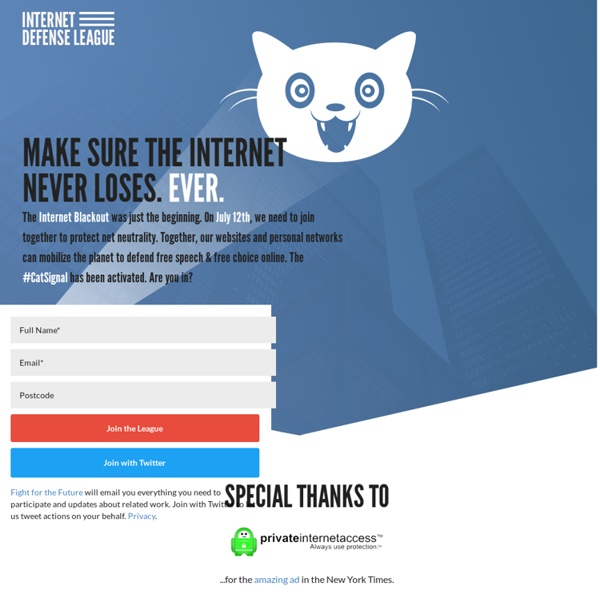 /chapter: Tor-The-Onion-Router / Circumvention Tools Tor (The Onion Router) is a very sophisticated network of proxy servers. When you are using Tor to access a Web site, your communications are randomly routed through a network of independent, volunteer proxies. All the traffic between Tor servers (or relays) is encrypted, and each of the relays knows only the IP address of two other relays -- the one immediately previous to it and the one immediately after it in the chain. This makes it very difficult for: 8,200+ Strong, Researchers Band Together To Force Science Journals To Open Access Evolutionary biologist Michael Eisen made this t-shirt design in support of the Elsevier boycott. Academic research is behind bars and an online boycott by 8,209 researchers (and counting) is seeking to set it free…well, more free than it has been. The boycott targets Elsevier, the publisher of popular journals like Cell and The Lancet, for its aggressive business practices, but opposition was electrified by Elsevier’s backing of a Congressional bill titled the Research Works Act (RWA). Though lesser known than the other high-profile, privacy-related bills SOPA and PIPA, the act was slated to reverse the Open Access Policy enacted by the National Institutes of Health (NIH) in 2008 that granted the public free access to any article derived from NIH-funded research. But the fight for open access is just getting started. Seem dramatic?

Net Neutrality 101 When we log onto the Internet, we take lots of things for granted. We assume that we'll be able to access whatever Web site we want, whenever we want to go there. We assume that we can use any feature we like -- watching online video, listening to podcasts, searching, e-mailing and instant messaging -- anytime we choose. We assume that we can attach devices like wireless routers, game controllers or extra hard drives to make our online experience better. What makes all these assumptions possible is "Network Neutrality," the guiding principle that preserves the free and open Internet. Net Neutrality means that Internet service providers may not discriminate between different kinds of content and applications online.

Full text of "Guerilla Open Access Manifesto" Guerilla Open Access Manifesto Information is power. But like all power, there are those who want to keep it for themselves. The world's entire scientific and cultural heritage, published over centuries in books and journals, is increasingly being digitized and locked up by a handful of private corporations. Want to read the papers featuring the most famous results of the sciences?

The Technium How can we have a world in which we are all watching each other, and everybody feels happy? The question that I'm asking myself is, how far will we share, when are we going to stop sharing, and how far are we going to allow ourselves to monitor and surveil each other in kind of a coveillance? I believe that there's no end to how much we can track each other—how far we're going to self-track, how much we're going to allow companies to track us—so I find it really difficult to believe that there's going to be a limit to this, and to try to imagine this world in which we are being self-tracked and co-tracked and tracked by governments, and yet accepting of that, is really hard to imagine.

Internet Creators Write Open Letter to Congress in Opposition to SOPA Dec 15, 2011 A group of 83 internet engineers, including many who helped found internet protocols, have submitted an open letter to Congress in which they oppose the internet blacklist bills SOPA and PROTECT IP. Vint Cert, one of the “Fathers of the Internet.” Tim Berners-Lee: demand your data from Google and Facebook Tim Berners-Lee, the father of the world wide web, has urged internet users to demand their personal data from online giants such as Google and Facebook to usher in a new era of highly personalised computer services "with tremendous potential to help humanity". Berners-Lee, the British born MIT professor who invented the web three decades ago, says that while there has been an explosion of public data made available in recent years, individuals have not yet understood the value to them of the personal data held about them by different web companies. In an interview with the Guardian, Berners-Lee said: "My computer has a great understanding of my state of fitness, of the things I'm eating, of the places I'm at. My phone understands from being in my pocket how much exercise I've been getting and how many stairs I've been walking up and so on." "It's interesting that people throughout the existence of the web have been concerned about monopolies.

How I Published My Scholarly Book With an Open Access CC-BY License [Open Access Week in 2014 is October 20-26.] Have you noticed that scholarly books are getting more and more expensive? It’s not just the journals that are exorbitantly priced. Yesterday I didn’t buy a really interesting anthology in my field because it cost over $100. More and more of the monographs I’m interested in cost £50 or £60 or even £80. You can download Seeing Ourselves Through Technology for free.

Neoliberalism has brought out the worst in us We tend to perceive our identities as stable and largely separate from outside forces. But over decades of research and therapeutic practice, I have become convinced that economic change is having a profound effect not only on our values but also on our personalities. Thirty years of neoliberalism, free-market forces and privatisation have taken their toll, as relentless pressure to achieve has become normative. If you’re reading this sceptically, I put this simple statement to you: meritocratic neoliberalism favours certain personality traits and penalises others. There are certain ideal characteristics needed to make a career today. 10 Projects to Liberate the Web (originally posted on Shareable) In the last nine months of planning the Contact Summit, I’ve come across a range of projects and initiatives building toward the “Next Net.” Though they vary in their stages of development and specific implementations, they fall under the common themes of enabling peer-to-peer communication and exchange, protecting personal freedom and privacy, and giving people more control over their data and identity on the web.

Meet the Robin Hood of Science The tale of how one researcher has made nearly every scientific paper ever published available for free to anyone, anywhere in the world. On the evening of November 9th, 1989, the Cold War came to a dramatic end with the fall of the Berlin Wall. Four years ago another wall began to crumble, a wall that arguably has as much impact on the world as the wall that divided East and West Germany. The wall in question is the network of paywalls that cuts off tens of thousands of students and researchers around the world, at institutions that can’t afford expensive journal subscriptions, from accessing scientific research. On September 5th, 2011, Alexandra Elbakyan, a researcher from Kazakhstan, created Sci-Hub, a website that bypasses journal paywalls, illegally providing access to nearly every scientific paper ever published immediately to anyone who wants it.

The Baltic Institute of Finland - eCitizen II The Baltic Institute of Finland led the Interreg IVC financed project - eCitizen II – Towards citizen-centered eGovernment in European cities and regions -which was launched in the beginning of January 2010 and ended in December 2013. The cooperation was designed to support European cities and regions in their joint efforts to accelerate eGovernment through exploiting established networks, gained experiences and good practices to improve interaction between citizens and public authorities, better involving citizens in local decision-making and contributing to change in operational culture and attitudes within public administrations. As a follow-up project, eCitizen II brought added-value to interregional eGovernment cooperation focusing on sharing the accumulated knowledge, experiences, best practices, and transferring them between the more advanced and less experienced cities and regions throughout Europe. The online manual is available on www.eparticipation.eu