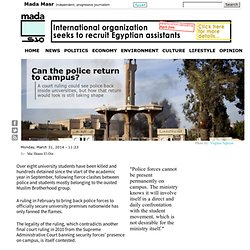 The ministry knows it will involve itself in a direct and daily confrontation with the student movement, which is not desirable for the ministry itself. " Over eight university students have been killed and hundreds detained since the start of the academic year in September, following fierce clashes between police and students mostly belonging to the ousted Muslim Brotherhood group.

A ruling in February to bring back police forces to officially secure university premises nationwide has only fanned the flames. The legality of the ruling, which contradicts another final court ruling in 2010 from the Supreme Administrative Court banning security forces' presence on campus, is itself contested. 15MBcn_int : Earlier in Cairo, Tear Gas... 15MBcn_int : The image of students being...

Moataz_ELgaml : Military Democracy Military... Police are cracking down on students – but what threat to law and order is an over-articulate history graduate? Why are some of the most powerful people in Britain so terrified of a bunch of students? 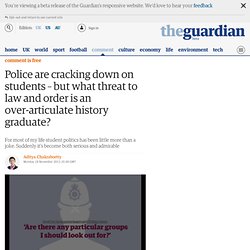 If that sounds a ridiculous question, consider a few recent news stories. As reported in this paper last week, Cambridge police are looking for spies to inform on undergraduate protests against spending cuts and other "student-union type stuff". Meanwhile, in London last Thursday, a student union leader, Michael Chessum, was arrested after a small and routine demo. Officers hauled him off to Holborn police station for not informing them of the precise route of the protest – even though it was on campus. The 24-year-old has since been freed – on the strict condition that he doesn't "engage in protest on any University Campus and not within half a mile boundary of any university". While we're trawling for the ridiculous, let us remember another incident this summer at the University of London, when a 25-year-old woman was arrested for the crime of chalking a slogan on a wall.

Education under attack. 3 maart 2014 - Attacks on students and teachers are a daily reality in over thirty countries. 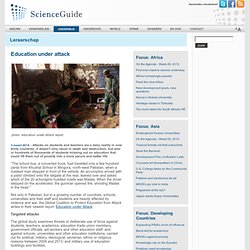 It doesn't only result in death and destruction, but also in hundreds of thousands of students missing out on education that could lift them out of poverty into a more secure and better life. “The school bus, a converted truck, had travelled only a few hundred yards from Khushal School in Mingora, north-west Pakistan, when a masked man stepped in front of the vehicle. An accomplice armed with a pistol climbed onto the tailgate at the rear, leaned over and asked which of the 20 schoolgirls huddled inside was Malala. When the driver stepped on the accelerator, the gunman opened fire, shooting Malala in the head.” Not only in Pakistan, but in a growing number of countries, schools, universities and their staff and students are heavily affected by violence and war, the Global Coalition to Protect Education from Attack writes in their newest report ‘Education under Attack’. 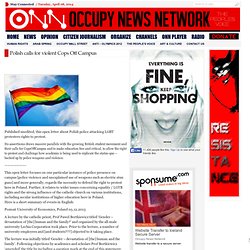 Its assertions draws massive parallels with the growing British student movement and their calls for CopsOffCampus and to make education free and critical, to allow the right to protest and challenge how academia is being used to replicate the status-quo – backed up by police weapons and violence. This open letter focuses on one particular instance of police presence on campus [police violence and unexplained use of weapons such as electric stun guns] and more generally, regards the necessity to defend the right to protest here in Poland. Further, it relates to wider issues concerning equality / LGTB rights and the strong influence of the catholic church on various institutions, including secular institutions of higher education here in Poland. Twenty students on protest march injured in police lathicharge. Huelga en la Universidad Complutense (más de 50 detenidos). 26marzo2014. Danips : Se denuncia manipulación y... Danips : Se corta la calle... Vijftig Spaanse studenten opgepakt.

Water cannons took away Dietrich's sight, let's give him a voice - Projects. Thanks so much to everyone has help us reach the target so quickly. 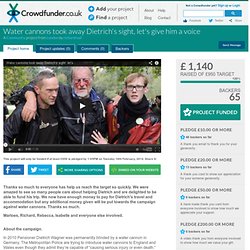 We were amazed to see so many people care about helping Dietrich and are delighted to be able to fund his trip. We now have enough money to pay for Dietrich's travel and accommodation but any additional money given will be put towards the campaign against water cannons. Thanks so much. Marloes, Richard, Rebecca, Isabelle and everyone else involved. About the campaign. Water cannons took away Dietrich's sight, let's give him a voice.