100 Best Photoshop Tutorials of All Time that Yield Professional Results 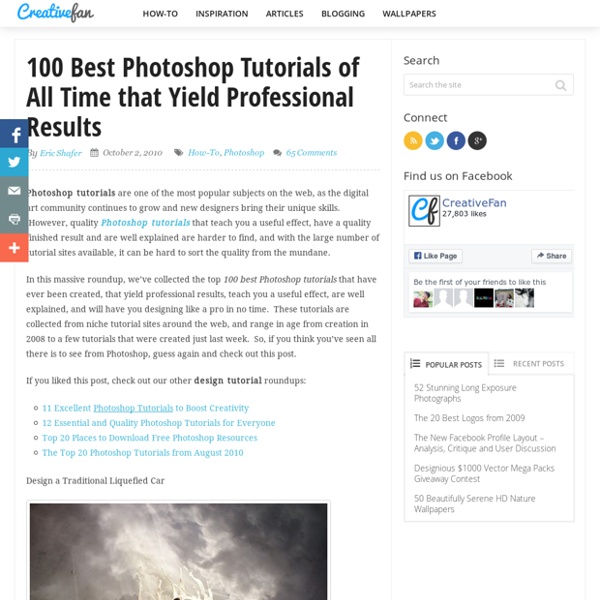 Photoshop tutorials are one of the most popular subjects on the web, as the digital art community continues to grow and new designers bring their unique skills. However, quality Photoshop tutorials that teach you a useful effect, have a quality finished result and are well explained are harder to find, and with the large number of tutorial sites available, it can be hard to sort the quality from the mundane. In this massive roundup, we’ve collected the top 100 best Photoshop tutorials that have ever been created, that yield professional results, teach you a useful effect, are well explained, and will have you designing like a pro in no time. These tutorials are collected from niche tutorial sites around the web, and range in age from creation in 2008 to a few tutorials that were created just last week. So, if you think you’ve seen all there is to see from Photoshop, guess again and check out this post. If you liked this post, check out our other design tutorial roundups:

Awesome digital bokeh effect in Photoshop Our last Wallpaper of the Week was an image I had created using Pixelmator, and I really liked the outcome. The best part about it was that it was pretty easy to accomplish in Pixelmator, but I decided for perspective's sake to create the same effect in Photoshop. The process is easy as well, but with a few extra steps. As in the previous tutorial, I will show you how to create a digital bokeh effect, but this time in Photoshop. The process is very easy and we will be using the super powerful Brush Engine, one of the coolest things in Photoshop. 100 Free Photoshop Actions Photoshop actions can be extremely useful timesavers when you find yourself performing the same steps over and over on an image. They're also an excellent way for photographers to quickly and easily pass on their favorite techniques to others. Today we'll be looking at how you can make your own, and showcasing 100 fantastic free Photoshop actions to use straight away!

950+ Photoshop Tutorials To Keep Your Skillset Updated I know how much everyone loves tutorials, I know I love writing them too. Well in this post I have taken my time to roundup some Photoshop Tutorials and some Photoshop Roundups that I think is valid to be featured in this post. I know quite a few people are going to love me for this, but let’s keep it professional. If you think that I was kidding about the title, well then you’re making a mistake, there is really 1000 tutorials in this post.

30 Best Photoshop Tutorials EmailEmail I have been using Photoshop since the 5th version when I was still a kid, watched dozens of tutorials but even after 10+ years of usage I cannot say I know it well. What I’ve learned is that you should never stop learning! The best why to learn Photoshop is of course by watching lots of tutorials, and the best part is that there are thousands of them, not to mention that most of them are completely free.

How To Manipulate Even More of Your Stupid Pics In this tutorial you will learn how to create a shattered effect in Photoshop. Related Photoshop Tutorials How to Make an Awesome Movie Poster In this tutorial, it is going to show you how to make a nice movie poster called “New Dawn”. Not many special techniques are required. Easy iOS Style Wallpaper in Photoshop I have received quite a few emails asking me how to create that sort of linen texture effect we see in the iOS on iPads and iPhones. I like that effect but had never stopped to think about how I could do that in Photoshop, so last week I decided to give it a try. For my surprise it was much easier than I thought. So in this tutorial I will show you how to create the linen texture effect in Photoshop and also the metal/glass effect we see in the Apple logo in the iOS. Step 1 Open Photoshop and create a new document.

Free Photoshop Tutorials ++60 « JinSpiration How To Create Detailed Gothic Linework Typography How To Create Detailed Gothic Linework Typography Tron Legacy Tutorial 25 Excellent Photoshop Texture Tutorials Adding texture to a design can create drastic changes and powerful results. Photoshop provides a number of different possibilities for working with textures, which allows designers to use their creativity. In this post we’ll features 25 tutorials that will help you to learn more about working with textures in Photoshop and how to create impressive results. Photographs into Stone with Photoshop Jul 27 Photoshop special effects are amongst my favorite things to do with photographs. I recently found a tutorial over at psdtuts.com that shows you how to convert a regular portrait photo into a Michelangelo-esque statue using a few photoshop tricks. You can see my two attempts at following this tutorial below. One statue looks more like stone, I then added a column and some lighting. I made the other statue look more like marble for a sleeker surface texture, I then added some angel wings.