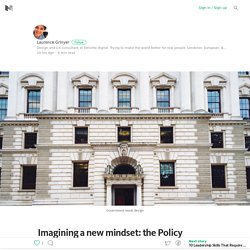 For the past 9 months I’ve been working in Policy Lab as part designer and part policy maker. As a Fast Streamer, my nine months in Lab have given me more insight and knowledge into design and government than I could have possibly imagined – it’s an experience I will forever cherish and be incredibly grateful for.

However I’m leaving both Policy Lab and the Civil Service this week to join Deloitte Digital and continue my design evangelising in the private sector. But I know that I’m leaving a team and movement that is really changing the civil service for the better. To put it simply; I think the Policy Lab mindset promises to radically change policy-making for the better. Creating a High-Performing Canadian Civil Service against a Backdrop of Disruptive Change. This report focuses primarily on the federal civil service in Canada, but many of the challenges and opportunities that are discussed – and the recommendations that are made – can be equally applied to other orders of government. 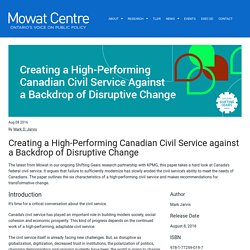 Civil servants at all levels of government exercise substantial authority and often have a significant impact on the lives of Canadians. The public sector economy is a substantial sector in its own right, accounting for nearly a quarter of our national employment and gross domestic product. Its efficiency and effectiveness are central to Canada’s economic performance.

There’s no innovation agenda without design thinking. Sara Diamond is president and vice-chancellor of OCAD University. 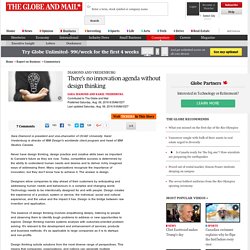 Karel Vredenburg is director of IBM Design’s worldwide client program and head of IBM Studios Canada. Never have design thinking, design practice and creative skills been as important to Canada’s future as they are now. Today, competitive success is determined by the ability to understand human needs and desires and to deliver richly imagined ways of addressing them. Many organizations recognize the importance of innovation, but they don’t know how to achieve it. The answer is design. Designers allow companies to stay ahead of their customers by anticipating and addressing human needs and behaviours in a complex and changing world. The essence of design thinking involves empathizing deeply, listening to people and observing them to identify tough problems to address or new opportunities to explore.

Federal ministers are hell-bent on consulting you: Paul Wells. Canada must be a nation of innovators. “684 ideas for #CdnInnovation,” Navdeep Bains, the federal minister for innovation, science and economic development, wrote on Twitter on Monday. 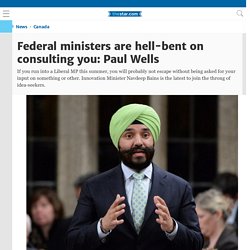 “Have you submitted yours yet?” Bains added a link to the website for the federal government’s “Innovation Agenda,” which features a one-minute video assuring visitors that, indeed, “Canada is a nation of innovators.” Perhaps this is because they have had so much practice. By my count, Bains is the fourth industry minister (as people in his office used to be called) to launch an innovation agenda since the turn of the century. Jean Chrétien’s minister Allan Rock had one. Now we have another federal innovation agenda. If you run into a Liberal this summer, you will probably not escape without being consulted about something. Time to empower next generation of public servants, says Canada's top bureaucrat - Ottawa. As the annual Public Service Week gets underway today, Canada's top bureaucrat says there's a clear focus this year on empowering the next generation inside the federal bureaucracy. 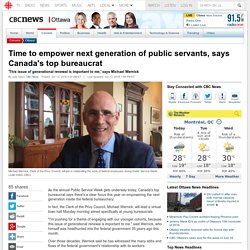 In fact, the Clerk of the Privy Council, Michael Wernick, will lead a virtual town hall Monday morning aimed specifically at young bureaucrats. "I'm pushing for a theme of engaging with our younger cohorts, because this issue of generational renewal is important to me. " said Wernick, who himself was headhunted into the federal government 35 years ago this month. Over those decades, Wernick said he has witnessed the many ebbs and flows of the federal government's relationship with its workers. There have "already [been] changes in tone, for sure" under Prime Minister Justin Trudeau, said Wernick, the man who gave Wernick his current job. But those changes haven't been as fast or as far reaching as many federal employees had hoped. "Stop using lower paid workers with no benefits. "We have a big problem. The Hill Times. The innovation challenge: Modernizing the public service. Written by Date published Share Story In a room filled with current and former federal public servants, many of whom have occupied the highest ranks of the federal government, and all of whom could rattle off a list of war stories that illustrate the need to modernize the public service, it was an audience comment from a Trudeau Scholar that underscored why public sector innovation — the topic that kicked off the last day of the 2015 Pierre Elliott Trudeau Foundation conference — is worthy of our attention. 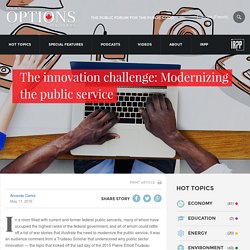 An alumna of the youth-in-care system herself and now a PhD student in social work at McGill University, Melanie Doucet raised the tragic case of the New Brunswick teen Ashley Smith, who eventually committed suicide in a federal prison in 2007 after spending five years within an uncoordinated and underresourced system of provincial and federal youth, mental health and corrections programs. Do you have something to say about the article you just read? Time to empower next generation of public servants, says Canada's top bureaucrat - Ottawa.