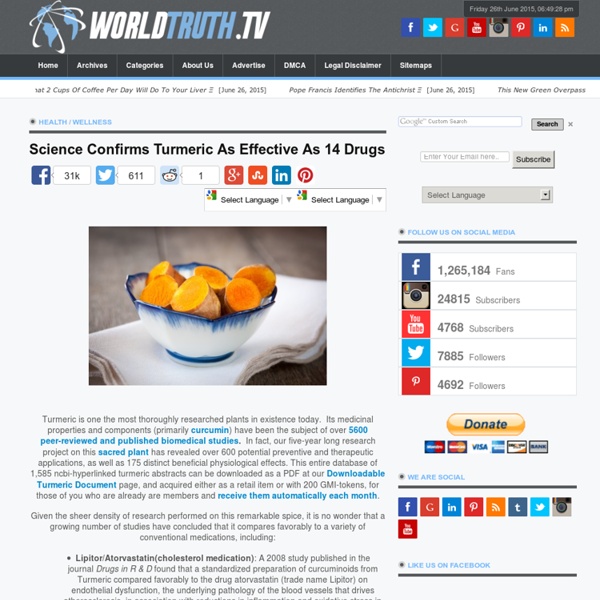 Turmeric is one the most thoroughly researched plants in existence today. Its medicinal properties and components (primarily curcumin) have been the subject of over 5600 peer-reviewed and published biomedical studies. In fact, our five-year long research project on this sacred plant has revealed over 600 potential preventive and therapeutic applications, as well as 175 distinct beneficial physiological effects. This entire database of 1,585 ncbi-hyperlinked turmeric abstracts can be downloaded as a PDF at our Downloadable Turmeric Document page, and acquired either as a retail item or with 200 GMI-tokens, for those of you who are already are members and receive them automatically each month. Given the sheer density of research performed on this remarkable spice, it is no wonder that a growing number of studies have concluded that it compares favorably to a variety of conventional medications, including: Resources www.greenmedinfo.com Eddie L. is the founder and owner of WorldTruth.TV.

Related:  CUERPO/MENTE • science and beyond

How to Perform the Heimlich Maneuver You’re in a restaurant enjoying a dinner with friends, when all of a sudden you hear a woman shriek: “He’s choking!” You calmly excuse yourself from the table and dash with effortless cool towards the source of the loud yell. You find a man with a look of terror in his eyes, gripping his throat, indicating that something is lodged within. You politely ask the distraught woman to step aside. You place your arms around the choking man’s abdomen and give two deft inward thrusts. A scallop shoots out of the man’s mouth and lands conveniently in a trash can.

Magnesium, Iodine and Sodium Bicarbonate by Mark Sircus Ac., OMD International Medical Veritas Association Edited by danreid.org Number One: Magnesium Chloride Magnesium chloride occupies the number one slot in all our protocols. I continue to receive testimonies that justify its placement as the most needed and useful medicinal substance in the world. When I have only a minute to explain to people why magnesium is so important I talk about the very basics of life, i.e., water, air, sunlight and food.

11 Foods To Never Put In The Refrigerator It seems like every time I return home from the grocery store, I’m stuck wondering what gets refrigerated and what I can leave out. Constantly throwing away food is the worst! I never knew that these 11 items should actually be stored at room temperature to get more bang for the buck. What a lifesaver! 7 Beers That You Should Stop Drinking Immediately organics.org Many of us choose what we eat very carefully, or at least dedicate our minimum attention to it. But when it comes to drinks, especially alcoholic beverages, we do little to make the best decisions for our health. Consciousness: Eight questions science must answer Consciousness is at once the most familiar and the most mysterious feature of our existence. A new science of consciousness is now revealing its biological basis. Once considered beyond the reach of science, the neural mechanisms of human consciousness are now being unravelled at a startling pace by neuroscientists and their colleagues. I've always been fascinated by the possibility of understanding consciousness, so it is tremendously exciting to witness – and take part in – this grand challenge for 21st century science.

Researchers Discover Radiation Treatment Leads To Increased Malignancy Of Cancer by Arjun A study published in the journal Cancer by researchers from the department of Radiation Oncology at the UCLA Jonsson Comprehensive Cancer Center reports that radiation drives breast cancer cells into greater malignancy(0)(1). Malignancy is a term used to describe the tendency of tumors and their potential to become progressively worse, ultimately resulting in death. FitLifeTV Have you ever finished a workout and as you were leaving thought, "Well that could have gone a lot better"? Maybe you weren't as focused as needed to be. Maybe you were in there for too long. Maybe you just didn't feel like pushing it that day. If you're anything like me, then you know what it is like to have the occasional off-day.

Male and female brains wired differently, scans reveal Scientists have drawn on nearly 1,000 brain scans to confirm what many had surely concluded long ago: that stark differences exist in the wiring of male and female brains. Maps of neural circuitry showed that on average women's brains were highly connected across the left and right hemispheres, in contrast to men's brains, where the connections were typically stronger between the front and back regions. Ragini Verma, a researcher at the University of Pennsylvania, said the greatest surprise was how much the findings supported old stereotypes, with men's brains apparently wired more for perception and co-ordinated actions, and women's for social skills and memory, making them better equipped for multitasking. "If you look at functional studies, the left of the brain is more for logical thinking, the right of the brain is for more intuitive thinking. So if there's a task that involves doing both of those things, it would seem that women are hardwired to do those better," Verma said.

How Does Grounding or Earthing Impact Your Health? By Dr. Mercola Do you notice you feel better when you walk barefoot on the Earth? Recent research has explained why this happens.Your immune system functions optimally when your body has an adequate supply of electrons, which are easily and naturally obtained by barefoot contact with the Earth. 7 Incredible Inventions by Teenage Wunderkinds When many of us were in our teens, work for science fairs comprised cut and paste displays on colorful presentation boards, and our hobbies weren't exactly about to change the world. But across the globe, teenagers with creative, scientific minds are already devising extraordinary devices, revolutionary materials and renewable technologies that might just change our planet for the greener. Click through to see some of their most incredible inventions - from bioplastics made from bananas to pee-powered energy generators and an ocean cleanup array to rid the world's oceans of waste. An Ocean Clean Up Array to Remove 7,250,000 Tons of Plastic From the World’s Oceans When we first covered Boyan Slat’s Ocean Cleanup Array it generated a phenomenal amount of excitement, as well as debate. The 19-year-old Dutch aerospace engineering student devised the array to be dispatched to the world’s garbage patches, with an initial estimate the the oceans could be cleaned up in around 5 years.

What Will Happen If You Drink A Glass Of Salt Water Every Morning? / Healthy Food Star Did you know a glass of salt water positively affects your body? Namely, it helps in detoxification and regeneration of the body. The trick is to mix the water with referred, natural and clean sea salt. In this case, healthy effects are guaranteed. If you drink a glass of salt water in the morning you will get many benefits, such as: – Normalizing blood sugar New wonder drug matches and kills all kinds of cancer — human testing starts 2014 Stanford researchers are on track to begin human trials of a potentially potent new weapon against cancer, and would-be participants are flooding in following the Post’s initial report on the discovery. The progress comes just two months after the groundbreaking study by Dr Irv Weissman, who developed an antibody that breaks down a cancer’s defense mechanisms in the body. A protein called CD47 tells the body not to “eat” the cancer, but the antibody developed by Dr Weissman blocks CD47 and frees up immune cells called macrophages — which can then engulf the deadly cells.

The 8 Minute Surgery That Will Give You Superhuman Vision A new bionic eye lens currently in development would give humans 3x 20/20 vision, at any age. The lens, named the Ocumetics Bionic Lens, was developed by Dr. Garth Webb, an optometrist in British Columbia who was looking for a way to optimize eyesight regardless of a person’s health or age. With this remarkable lens, patients would have perfect vision, ending the need for driving glasses, progressive lenses, and contacts, all of which are set to become a dim memory as the eye-care industry is transformed, CBC reports. Even better is the fact that people who get the lens surgically inserted will never get cataracts, because the lens replaces that of their natural eye, which inevitably decays over time. Webb says that anyone over the age of 25 is the best candidate, because that is when the eye is fully developed.