The Roman Empire. Or Republic. Or...Which Was It?: Crash Course World History #10 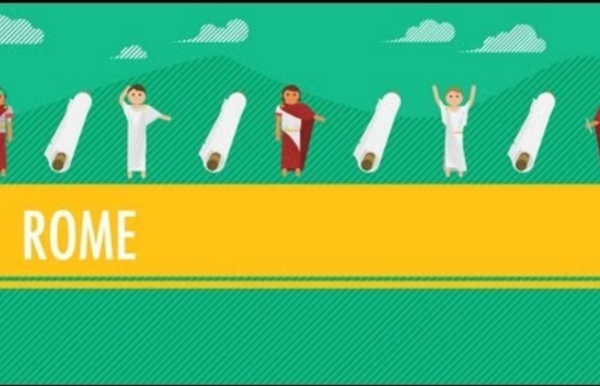 ABOUT - Ancient Language Institute Katherine L. Bradshaw, our Greek & Latin Fellow, has an irrepressible enthusiasm for connecting students with enduring ideas from the ancient past. That passion drives her teaching of Latin, ancient Greek, and Classics, whether the setting is a public school in Washington, DC, a classical Christian school in Virginia, a classroom at a university, ancient Roman ruins in Italy, or a video conference in cyberspace. Whatever the venue, Katherine guides students on the path to engaging with ancient authors directly, without a translator. On that journey, she encourages her students – ranging from adult learners to elementary schoolers – to explore, examine, and enjoy the ancient world’s resonance in their own lives. Katherine has an M.A. in Classics from the University of Maryland, as well as an M.A. in English from the George Washington University.

Which Language Uses the Most Sounds? Click 5 Times for the Answer With five distinct kinds of clicks, multiple tones and strident vowels — vocalized with a quick choking sound — the Taa language, spoken by a few thousand people in Botswana and Namibia, is believed by most linguists to have the largest sound inventory of any tongue in the world. The exact count differs among scholars. Studies commonly cite more than 100 consonants, and some say there are as many as 164 consonants and 44 vowels. English, by comparison, has about 45 sounds at its disposal, total. Taa, also known as !Xoon, is part of the Khoisan language group, spoken in the Kalahari Desert and hardly anywhere else. Maps in Interactive Notebooks « Teaching Social Studies Location, location, location. It affects not only real estate prices, but influences entire civilizations. I believe that one of the pieces to understanding why or how something happened is to understand where it happened. That being said, I think that geography for its own sake is boring and somewhat pointless. Bounderies and place names change.

‘Special and Beautiful’ Whistled Language Echoes Around This Island Two whistlers might struggle to understand each other, particularly during their first encounters — and need to ask each other to repeat sentences — like strangers who speak the same language with different accents. But “after whistling together for a while, their communication becomes as easy as if speaking Spanish,” Mr. Correa said. As is the case in many languages, whether whistled or not, there is a generation gap on La Gomera. Ciro Mesa Niebla, a 46-year-old farmer, said he struggled to whistle with a younger generation trained at school because, he said, “I’m a mountain guy who learned at home to whistle the words our family used to farm, but I don’t have the vocabulary of these kids who learn salon whistling, which is a bit too fancy for me.” Some older residents have also stopped whistling because of tooth problems.

Interactive Student Notebooks One of the stereotypes of high school classes, especially history classes, is that most instruction consists of dry, boring lectures. The teacher from Ferris Bueller’s Day Off as played by Ben Stein comes to mind. In 1930, the Republican-controlled House of Representatives, in an effort to alleviate the effects of the . . . Anyone? Anyone? ‘Astonishing’ dig reveals domestic life in the iron age When archaeologists began excavating land near the iron age hillfort at Wittenham Clumps, a famous Oxfordshire landmark, they were hopeful of unearthing something of interest because the area has been occupied for more than 3,000 years. But nothing prepared them for the excitement of discovering an extended iron age settlement, with the remains of more than a dozen roundhouses dating from 400BC to 100BC – as well as an enormous Roman villa built in the late third to early fourth century. The structures would have remained buried beneath the sprawling green landscape if not for a decision by Earth Trust, the environmental charity that cares for it, to redevelop its visitor centre. Investigating the archaeology was part of the planning application. Lisa Westcott Wilkins of DigVentures, an archaeology social enterprise, described the discovery as “astonishing”.

Interactive Notebooks « Teaching Social Studies Teaching Social Studies and Language Arts a teacher exploring integration Interactive Notebooks Chapter One - From Tundras to the Withdrawal of Rome – The British History Podcast This chapter covers the period from the end of the last Ice Age through to about 410 CE, and you will meet figures such as Julius Caesar, Boudica, and Magnus Maximus. The British History Podcast1 – A History of Britain 1 – A History of BritainThe British History Podcast Transcript2 – Invasion of Giant Deer, Cannibals, and Celts! Assignments - MrRoughton.com Rubric Cover Sheets How To Instructions Below you will find links to and descriptions of all the assignments we use for Choose Your Own Adventure. Click on the individual assignment links to get the full instructions and printable worksheets.

He Wants to Save Classics From Whiteness. Can the Field Survive? Over the next 40 minutes, there were speeches, votes, broken promises and bloody conflicts. Several people were assassinated. Eventually it seemed as though two factions were coalescing, and a count was called. The young man in the football shirt won the empire by seven votes, and Padilla returned to the lectern.

The Battle of Teutoburg Forest UNDER CONSTRUCTION "The result of this disaster was that the empire, which had not stopped on the shores of the Ocean, was checked on the banks of the Rhine." Florus, Epitome of Roman History (II.30) In 13 BC, Publius Quinctilius Varus was consul with Tiberius and responsible for the spectacle celebrating the return of Augustus from Spain and Gaul. (Augustus prided himself on his recovery of the legionary standards lost there and in Dalmatia and Parthia, Res Gestae, XXIX). A few years later, he married the grand-niece of the emperor himself (and earlier had been married to a daughter of Marcus Agrippa, whose funeral eulogy he delivered).

Take a Virtual Tour of the World's Largest Circular Tomb, Augustus' Mausoleum Rome is renowned for its landmarks, from the grand Colosseum to the palatial Pantheon. But these famed attractions aren’t all that the city has to offer: Just north of Castel Sant’Angelo, along the River Tiber, visitors will find the remains of a lesser-known, but still significant, monument: the Mausoleum of Augustus, the final resting place of the first Roman emperor and the largest circular tomb in the world. For much of the past 80 years, the mausoleum has stood abandoned, crumbling and closed to the public, writes Julia Buckley for CNN Travel. Today, tall trees render the mausoleum invisible from a nearby piazza. This week, however, city officials announced that a 13-year renovation of the tomb is finally set to draw to a close.