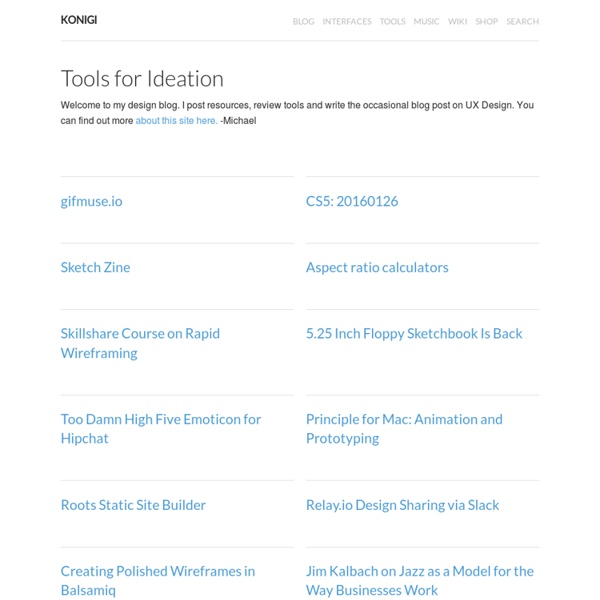 Interaction Design Pattern Library - Welie.com Suggest a pattern Have you seen new examples of patterns out there that have not been described on this site? Send me a link to an example and I'll add it to my to-do list. Suggest a pattern So you wanna be a user experience designer — Step 2: Guiding Principles [This is part of a series titled So You Wanna Be a User Experience Designer. Check out the previous post, Step 1: Resources] Five months ago I wrote a post titled, “So you wanna be a user experience designer,” in which I gathered all of the resources in my UX arsenal: publications and blogs, books, local events, organizations, mailing lists, webinars, workshops, conferences, and schooling. My intent was to give aspiring user experience designers, or even those on the hunt for additional inspiration, a launching pad for getting started. The response has been pretty remarkable — the link continues to be sent around the Twitterverse and referenced in the blogosphere.

Wireframes are dead, long live rapid prototyping Wireframes, your time is up. You’ve served your purpose. You’ve brought order where there was once chaos and provided gainful employment for thousands of UX designers, but I’m afraid now it’s time for you to go to the big recycling bin in the sky. You’re just no longer cut out for the cut and thrust of UX design and have been replaced by that young upstart called rapid prototyping. Designing Apps for Kids With the experience of having built ABCKit and many hours of testing different apps for kids behind us, we have noticed some recurring app design problems. For those working in this field, we would like to share some suggestions for designing and devising apps for children to help ensure the apps are correctly used by preventing some common design issues. If you’ve interacted with preschoolers (ages two to five), you’re aware that they do not quite grasp the concept of patience, especially when it comes to digital devices.

Samples It took a while, but here are some results from what people submitted for the Feedback Note call for samples: Dedicated Note Spaces Craig’s preferred method of capturing feedback is on the wireframes themselves within a dedicated notes section. After printing out the full set of wires on a large piece of paper he then takes notes and sketches on top of what is already there. Looking more closely, a lot of the feedback in this particular wireframe is written in a question or task format – as in: “How would the user do this or that”.

Touch Gesture Reference Guide The Touch Gesture Reference Guide is a unique set of resources for software designers and developers working on touch-based user interfaces including iPhone, Windows 7, Windows Phone 7, Android, and more. The guide contains an overview of the core gestures used for most touch commands. It tells how to use these gestures to support major user actions; provides visual representations of each gesture to use in design documentation and deliverables; and additionally provides an outline of how popular software platforms support core touch gestures. All in seven pretty PDF pages. It was conceived, researched, illustrated, and designed by Craig Villamor, Dan Willis, Luke Wroblewski, and Jennifer Rhim (document design). Platform support information comes from the following sources:

A Look Inside Mobile Design Patterns Patterns for mobile application design Design patterns for mobile are emerging as the platform matures. Theresa Neil’s new book Mobile Design Pattern Gallery provides solutions to common design challenges. 50 Useful and Free Web UI, Mobile UI and Wireframe Kits Here we are featuring 50 useful, free and spanking new Web UI and wireframes resources that you will definitely love. Web designers always require some fundamental user interface elements to produce a model of user interface either of a website or software. For that, they require wireframing and UI design kits which help them to replicate the user interface. In this round-up, we have collected some web and mobile user interface kits which are practical in creating low-fidelity illustrations for your projects. We hope you will like this compilation.

Are your users S.T.U.P.I.D? It is an honest question: how smart are your users? The answer may surprise you: it doesn’t matter. They can be geniuses or morons, but if you don’t engage their intelligence, you can’t depend on their brain power. Far more important than their IQ (which is a questionable measure in any case) is their Effective Intelligence: the fraction of their intelligence they can (or are motivated to) apply to a task. Take, for example, a good driver. They are a worse driver when texting or when drunk. The difference between a UX Designer and UI Developer « Melbourne, as in the city. I’ve recently found myself trying to explain the difference between the skills I bring to a project as a UX Designer and why I’m not able to cover the role of a dedicated UI Developer. There is of course a necessary overlap between the skills-sets in these roles, which is a good thing. And some individuals have a broader coverage of skills than others. However, people outside of these roles don’t always appreciate the specialist skills and focus that is required to work within them. This as simply as I can describe the different skills required for each role:

Mockups Take a second. Let it sink in. The first impression might be disorienting. There are very few interface elements on the screen. Futurico UI Pro - Advanced User Interface Elements Pack Futurico UI is the one of world’s biggest user interface elements pack. This extraordinary collection contains more than 200 web design elements to use in any design or application and for projects of all styles and concepts. All the elements in this pack are editable and available in fully-layered PSD (rasterized) format for easy integration. The pack includes three sets of elements in different colors and two examples of use in web design, showing how a single UI kit can help you create very different solutions. The Futurico UI Pro set is perfect for everyone, from the beginner to professional designer, and can be used as a framework to build your own design elements. Try it today.