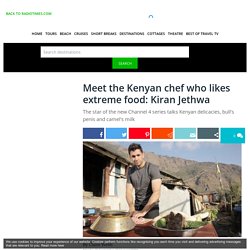 In his new Channel 4 show, he travels to remote corners of the globe, beginning with western Mongolia, where he joins Kazakh hunters on horseback as they use eagles to capture wild rabbit and learns about an explosive form of pressure cooking involving an entire sheep. We asked him what he wouldn't put in his mouth again and discovered he has a soft spot for Manchester's curry mile... Smartphone with cover designed in Kenya launched - Capital Business. By MARGARET WAHITO, NAIROBI, Kenya, Mar 22 – A Smartphone with a cover designed in Kenya has been launched locally and internationally. 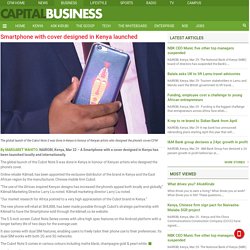 The global launch of the Cubot Note S was done in Kenya in honour of Kenyan artists who designed the phone’s cover. Online retailer Kilimall, has been appointed the exclusive distributor of the brand in Kenya and the East African region by the manufacturer, Chinese mobile firm Cubot. “The use of the African inspired Kenyan designs has increased the phone’s appeal both locally and globally,” Kilimall Marketing Director Larry Liu noted. Kilimall marketing director Larry Liu noted. Kenya Film Commission to set up a fund to support Kenya's film industry.

Kenya pay-TV firms set to feel the heat of Netflix launch. A man watches Netflix content on a laptop and desktop. 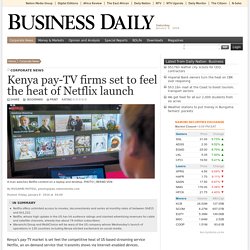 PHOTO | BERND VON Kenya’s pay-TV market is set feel the competitive heat of US-based streaming service Netflix, an on-demand service that transmits shows via Internet-enabled devices. Netflix offers unlimited access to movies, documentaries and series at monthly rates of between Sh815 and Sh1,222, a significantly lower fee than the rate cards of Kenyan pay-TV firms Wananchi Group and MultiChoice. The two firms operate Zuku and DSTV respectively. Netflix, whose high uptake in the US has hit audience ratings and slashed advertising revenues for cable and satellite channels, already has about 74 million subscribers mainly in the US and Europe. Wananchi Group and MultiChoice will be wary of the US company whose Wednesday’s launch of operations in 130 countries including Kenya elicited excitement on social media.

Some popular shows on Netflix include Narcos, Sense8 and Making A Murderer among several others. Nairobi 'Fatboy' takes on Hollywood with animation firm. Feature:Kenya in drive to have 40% local content on broadcasting platforms. CC image courtesy of Matti Mattila. 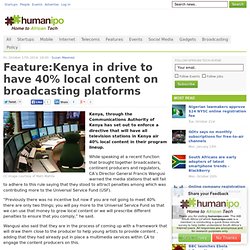 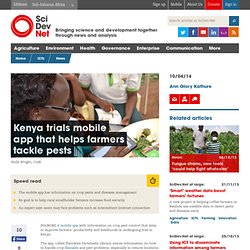 The app, called Plantwise Factsheets Library, stores information on how to handle crop diseases and pest problems, especially in remote locations in the developing world. The app is accessible to both farmers and plant doctors — experts with a background in agriculture who have received training to operate plant clinics where they diagnose and treat crop diseases. The app is being trialled on Android phones and on low-cost Lenovo A3000 tablets. “The main goal of the app is to improve food security by enabling farmers to produce more for consumption.” Tim Holmes, Plantwise knowledge bank, CABI. Samsung unveils 6 locally made apps in Kenya.

Samsung Electronics East Africa in conjunction with Strathmore University’s iLab yesterday launched six locally developed apps to run on the Android platform as part of a partnership formed by the two organisations. 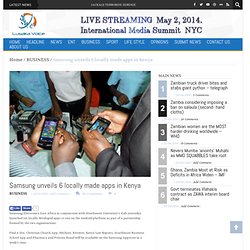 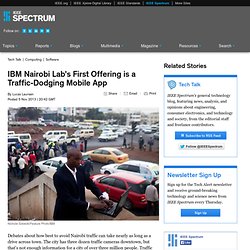 The city has three dozen traffic cameras downtown, but that's not enough information for a city of over three million people. Traffic costs the city US $600 000 a day, by one estimate. IBM's Nairobi lab, in beta since a year ago, tackled traffic early on and today launched a mobile application to help drivers avoid traffic. Safaricom launches "VumaOnline" to offer free WiFi in matatus. As we had exclusively revealed earlier, Safaricom today announced the launch of Vuma Online, which will see commuters access WiFi in public transport vehicles. 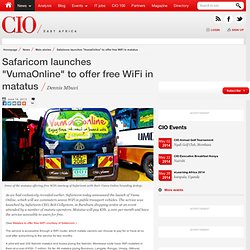 The service was launched by Safaricom CEO, Bob Collymore, in Buruburu shopping centre at an event attended by a number of matatu operators. Matatus will pay KSh. 2,000 per month and have the service accessible to users for free. (See Matatus to offer free WiFi courtesy of Safaricom ) Sh270mn to boost Kenya’s movie productions. Dubbed the Movie Village, the hub will help reduce the costs of producing movies in the country and consequently encourage Kenyans to embrace more locally produced content. Similar hubs will later be rolled out in the rest of the counties/FILE NAIROBI, Kenya, Jun 4 – The government through the Youth Enterprise Development Fund has set aside Sh270 million to establish Kenya’s version of the world famous Hollywood, Bollywood or Nollywood – a hub for production of cinema and television content.

Dubbed the Movie Village, the hub will help reduce the costs of producing movies in the country and consequently encourage Kenyans to embrace more locally produced content. Scramble For Kenya’s Ad Market Intensifies. VENTURES AFRICA – Kenya’s communications and advertising market is set for stiffer competition after a new marketing communication firm, Redhouse Group Limited announced its entry into the market. 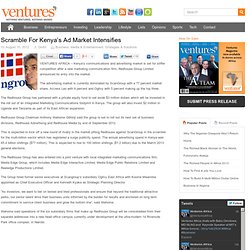 The advertising market is currently dominated by ScanGroup with a 77 percent market share, Access Leo with 6 percent and Ogilvy with 5 percent making up the top three. Kenya’s outdoor advertising industry is booming, thanks to brand competition and elections. It is a season of good business for outdoor advertising companies in Kenya as campaign fever sweeps across the country ahead of the March 4 general elections. 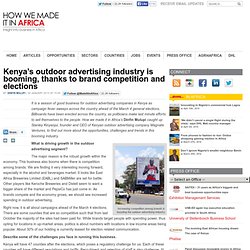 Billboards have been erected across the country, as politicians make last minute efforts to sell themselves to the people. How we made it in Africa’s Dinfin Mulupi caught up Stanley Kinyanjui, founder and CEO of Kenyan outdoor advertising company Magnate Ventures, to find out more about the opportunities, challenges and trends in this booming industry. Increasing competition among brands is boosting the outdoor advertising industry.