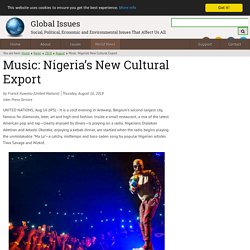 Inside a small restaurant, a mix of the latest American pop and rap—clearly enjoyed by diners—is playing on a radio. Nigerians Olalekan Adetiran and Adaobi Okereke, enjoying a kebab dinner, are startled when the radio begins playing the unmistakable "Ma Lo"—a catchy, midtempo and bass-laden song by popular Nigerian artistes Tiwa Savage and Wizkid. Wizkid performs in London, United Kingdom. Photo: Alamy/Michael Tubi. Nollywood injects hope in Nigeria's contracting economy. Nigeria launches digital broadcasting in Abuja; residents to get 30 free TV channels. The federal government on Thursday launched the Abuja phase of the Digital Switch Over (DSO), signalling the commencement of the full roll-out of digital broadcasting across the federal capital city. 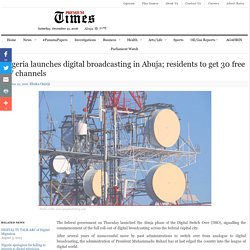 After several years of unsuccessful move by past administrations to switch over from analogue to digital broadcasting, the administration of President Muhammadu Buhari has at last edged the country into the league of digital world. Nigerian Music Industry Rakes in $51m in 2016 - INFORMATION NIGERIA. A report by PricewaterhouseCoopers (PwC) has revealed that the Nigerian music industry generated over $51 million in 2016. 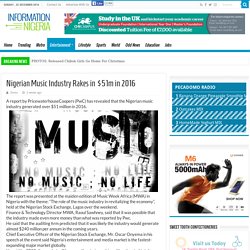 The report was presented at the maiden edition of Music Week Africa (MWA) in Nigeria with the theme: “The role of the music industry in revitalizing the economy”, held at the Nigerian Stock Exchange, Lagos over the weekend. Finance & Technology Director MWA, Raoul Sawhney, said that it was possible that the industry made even more money than what was reported by Pwc.

He said that the auditing firm predicted that it was likely the industry would generate almost $240 million per annum in the coming years. Nigeria's Nollywood recognised on an international platform. A Nigerian startup that's redefining gaming in Africa. Recently, I have been intrigued to see how parts of this great continent are beginning to take up the mettle and make a mark when it comes to technology prowess, particularly, the platform economy. 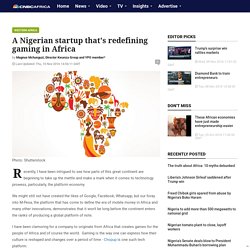 We might still not have created the likes of Google, Facebook, Whatsapp, but our foray into M-Pesa, the platform that has come to define the era of mobile money in Africa and many other innovations, demonstrates that it won’t be long before the continent enters the ranks of producing a global platform of note. I have been clamoring for a company to originate from Africa that creates games for the people of Africa and of course the world.

Gaming is the way one can express how their culture is reshaped and changes over a period of time - Chopup is one such tech platform. Canon storms Nigeria, set to reengineer Nollywood — Saturday Magazine — The Guardian Nigeria. Top Canon executive with some Nigerian partners at the launch in Lagos. 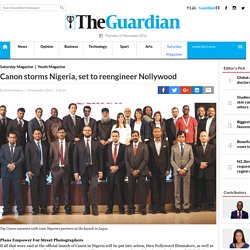 Plans Empower For Street Photographers If all that were said at the official launch of Canon in Nigeria will be put into action, then Nollywood filmmakers, as well as street photographers are in for an exciting moment. Innoson, Chinese group target 7,000 workers for technology transfer » TODAY.ng. About 7,000 workers are expected to benefit from a technology transfer initiative between Innoson motors and a Chinese group, Shandong Broadcasting and Television. 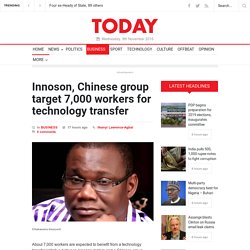 The group said that the initiative is under its expansion of investment into the media and Information Communication Technology sectors. Welcome to Nollywood: The world’s second-largest film industry. Nigeria: Kannywood - Nigeria to Establish World-Class Film Village in Kano. By Mohammed Lere The Nigerian government will establish a world-class film village in Kano, with a view to standardizing local film production and creation of jobs. 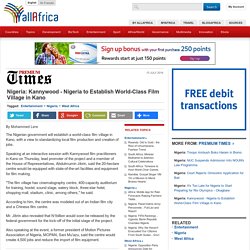 Speaking at an interactive session with Kannywood film practitioners in Kano on Thursday, lead promoter of the project and a member of the House of Representatives, Abdulmumin Jibrin, said the 20-hectare centre would be equipped with state-of-the-art facilities and equipment for film making. "The film village has cinematography centre, 400-capacity auditorium for training, hostel, sound stage, eatery block, three-star hotel, shopping mall, stadium, clinic, among others," he said.

According to him, the centre was modeled out of an Indian film city and a Chinese film centre. Mr. Nigeria: Govt to Review N3 Billion Nollywood Grant. Welcome to Nollywood: The world’s second-largest film industry. The booming comedy industry in Nigeria. The comedy industry is estimated to be worth about N50bn. 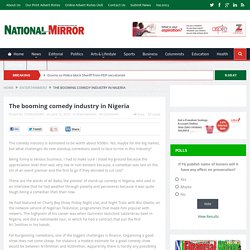 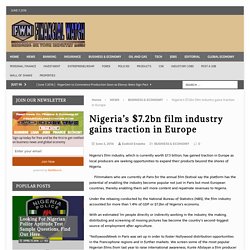 Filmmakers who are currently at Paris for the annual film festival say the platform has the potential of enabling the industry become popular not just in Paris but most European countries, thereby enabling them sell more content and repatriate revenues to Nigeria. Under the rebasing conducted by the National Bureau of Statistics (NBS), the film industry accounted for more than 1.4% of GDP or $7.2bn of Nigeria’s economy. 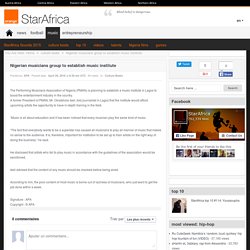 A former President of PMAN, Mr. Omatshola Iseli, told journalists in Lagos that the institute would afford upcoming artists the opportunity to have in-depth training in the field. “Music is all about education and it has been noticed that every musician play the same kind of music. “The fact that everybody wants to be a superstar has caused all musicians to play all manner of music that makes no sense to the audience. The ballet dance troupe started in a Nigerian garage. Off the bustling streets of the Nigerian city Lagos I encountered something totally unexpected - ballet dancers. A community centre squashed somewhere between a street market selling clothes, a Catholic church and a primary school houses the dancers.

In a derelict building, off the main thoroughfare of the Marina district on Lagos Island is a three-story block that now houses the Society of Performing Arts Nigeria (Span). It's a space Sarah Boulos found affordable a few years ago, when she created Span. Lebanese-Nigerian Mrs Boulos was born in Burkina Faso but moved to Nigeria when her family relocated to expand their business. Eleven years ago, she had what she describes as an epiphany to leave her career in public health and return to her teenage passion of ballet dancing. She says it felt more like a religious calling, rather than her feet itching to dance. Inside Kannywood: Nigeria's Muslim film industry. Kano, Nigeria – Fatima is sitting on the queen-size bed next to a young man in a baban riga robe. They are involved in a lively conversation in Hausa. BOI, Film makers collaborate on N1 Billion Nollyfund. Buhari: President appoints 24 year-old as PA on new media.

President Buhari just back from his well-deserved vacation, seems to have decided to infuse some fresh blood into his cabinet. Daily Post reports that Mr. President has appointed 24 year-old Bashir Ahmad, as his Personal Assistant on New Media. This move obviously, is to give Buhari a visible presence online, and also to interface with the youth, who make up the majority of the Nigerian populace. Ahmad, a former online editor of Leadership Newspapers, also served as the Personal Assistant on new media to the publisher of Leadership, Sam Nda-Isaiah. During Buhari’s presidential campaign Ahmad was part of the Buhari Support Organization (BSO).

Buhari’s new media aide will handle all his social media interactions. In pictures: The power of one woman. An exhibition of early pen and ink works, delicate watercolours, acrylics, jewellery and Adire textiles by the Nigerian artist Chief Nike Davies-Okundaye is on show in London. Image copyright Nike Davies-Okundaye Davies-Okundaye trained in Adire, a traditional indigo-dyed cloth worn by women in south-western Nigeria, and featuring hand-painted patterns of birds, shells, and geckos. She is credited with the contemporary revival of this once fading textile and batik industry. Some portraits by Joanna Lipper are also on show. Netflix Launches In Nigeria - SaharaENT. Netflix in Nigeria - Nigerian youths share their opinion. AfriDeo Enters The Nigerian Online Streaming Market - CPAfrica. A new platform, known as AfriDeo, has announced its entry into the Nigerian online streaming industry, with the firm streaming African news, series, comedy, movies and music videos via web and mobile.

According to AfriDeo, it claims to be the first of its kind for Africa, in that it is an online information and entertainment destination for Africans worldwide, providing on-demand access to video content that matters. Image Credit: Tothenew.com According to founder Obasi Oluchukwu, the startup’s game plan is to provide a hub for all the clips emanating from across Africa and the diaspora.

He said the platform aims to address the inconvenience of discovering good clips to watch and help grow African content reach. “Today there exists no recognized destination to help viewers passionate about Africa to discover easily local content that fit their interest,” he told Disrupt Africa. “The platform is presenting a better access point to African content streaming online.

Can we choose our racial identities? Should we? Nigeria's first all female radio station set for launch - NIMN to provide platforms for Consumer Behaviors and Trends - CPAfrica. The Nigeria Institute of Marketing of Nigeria (NIMN) has announced it has set up a committee within the body to be engaging in consumer research on consultancy basis in order to provide platforms for insight into consumer behaviors and trends. Outdoor media expenditure recorded N30.6bn in 2014 —Survey.