7 Alternatives to Pandora and Last.FM 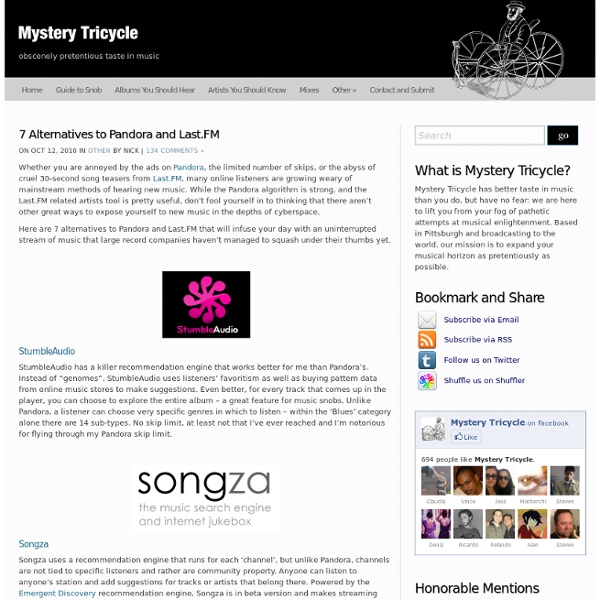 Whether you are annoyed by the ads on Pandora, the limited number of skips, or the abyss of cruel 30-second song teasers from Last.FM, many online listeners are growing weary of mainstream methods of hearing new music. While the Pandora algorithm is strong, and the Last.FM related artists tool is pretty useful, don’t fool yourself in to thinking that there aren’t other great ways to expose yourself to new music in the depths of cyberspace. Here are 7 alternatives to Pandora and Last.FM that will infuse your day with an uninterrupted stream of music that large record companies haven’t managed to squash under their thumbs yet. StumbleAudio StumbleAudio has a killer recommendation engine that works better for me than Pandora’s. Instead of “genomes”, StumbleAudio uses listeners’ favoritism as well as buying pattern data from online music stores to make suggestions. Songza Musicovery Elegantly, Musicovery boils down songs to a location on two scales: Energetic-Calm and Positive-Dark. Stereomood

Top 10 Free Ways To Discover New Music Online Bored with your music and want to discover some new bands or singers? There are two main ways you can do that online. You can use services which create music maps, allowing you to explore artists similar in genre to the artists you already listen to. Or you can use music blogs and websites that showcase independent or up-and-coming artists, whether the music is being reviewed, or posted by the musicians themselves. Some of these websites have a community built around them, which gives fans the opportunity to interact directly with these new talents. Here is a list of 10 free sites to discover new music. 10 things science (and Buddhism) says will make you happy I’m a science geek as well as a Buddhist geek, and recently when I was leading a retreat on how to bring more joy into our lives I found myself making a lot of references to an article published in Yes magazine, which touched on ten things that have been shown by science to make us happier. It seemed natural to draw upon the article because so much of the research that was described resonated with Buddhist teachings. So I thought it would be interesting to take the main points of the article and flesh them out with a little Buddhism. 1. Be generous“Make altruism and giving part of your life, and be purposeful about it,” Yes magazine says. “Researcher Elizabeth Dunn found that those who spend money on others reported much greater happiness than those who spend it on themselves.”

The Ultimate Road Trip Playlist — 50 Best Road Trip Songs  No road trip is complete without a playlist of songs that capture the spirit of traveling on the open road. So we’ve compiled a list of the 50 best road trip songs . In order to make this be-all end-all totally definitive list that all other lists look up to, the songs had to meet the following criteria: a.) encompass the excitement and freedom of road tripping b.) make the time pass faster Wild Mood Swings <p style="font-size:x-large;">Oh no! You don't have Javascript enabled. Please <a href=" Javascript now</a> or the only moods you'll experience will be boredom and frustration.</p><hr noshade> Pick your mood, click the button and Wild Mood Swings will open an appropriate website in a new window.

What is causing the waves in California to glow? It looks like something from the movie "Avatar": ocean waters that light up like neon glow sticks when they splash. Beaches across southern California have recently been alight with eerie, glowing waves. What could be causing such an otherworldly phenomenon? Folk Music of England, Scotland, Ireland, Wales and America Welcome to Lesley Nelson-Burns' (aka the Contemplator)'s Folk Music Site.Folk and Traditional Music and Popular Songs, with Lyrics, Midi, Tune Information and History behind the folksongs and ballads. Irish, British and American Folk Music including Francis J. Child Ballads and Sea Shanties. The background music is Spanish Ladies Sequenced by Lesley Nelson-Burns Please be aware that the midi controller will work in Chrome, Firefox, and Opera, but it does not function in Internet Explorer or Edge.

The Nerve Mixtape With Robert Schwartzman The former Rooney frontman and general Hollywood man about town gives us a romantic playlist for the ages. by Alex Heigl Robert Schwartzman is best known for being the frontman of uber-California band Rooney, and yes, Jason Schwartzman's brother. But he's also an accomplished actor and musician in his own right, and is currently promoting his second album, Double Capricorn, sales of which benefit the Tibetan Healing Fund. Pick up a copy, then enjoy this Spotify playlist of Robert's Mixtape. Къщата на хобитите в Уелс - StumbleUpon URGENT: Computer Backup Required Matt Folson - Microsoft Specialist Your computer has become slow, unresponsive, displaying errors, or has started experiencing other issues. These issues are often caused by Viruses, Malware, or improper maintenance of your system.

The Top 100 Seventies Singles presents ere's the inside story -- along with links to midis, lyrics and videos -- on the Top 100 singles of the Seventies. Songs we listened to on AM radios at home... in cars... at the beach. From unforgettable masterpieces by major superstars (Marvin Gaye's "Let's Get It On") to definitive singles by forgotten greats (Jim Croce's "Bad, Bad Leroy Brown") to fun, quirky novelties by one-hit wonders (Terry Jacks' "Seasons In The Sun"), these 100 most popular songs of the Seventies are a fascinating combination of the sublime and the ridiculous.

City with Superfast Internet Invites Innovators to Play Citizens in Chattanooga, Tennessee, have access to one-gigabit-per-second Internet—that’s 100 times the U.S. national average, and fast enough to download a two-hour movie in about five seconds. The only question is: what to do with it? The city is hoping a contest with $300,000 in prize money will help answer that question.