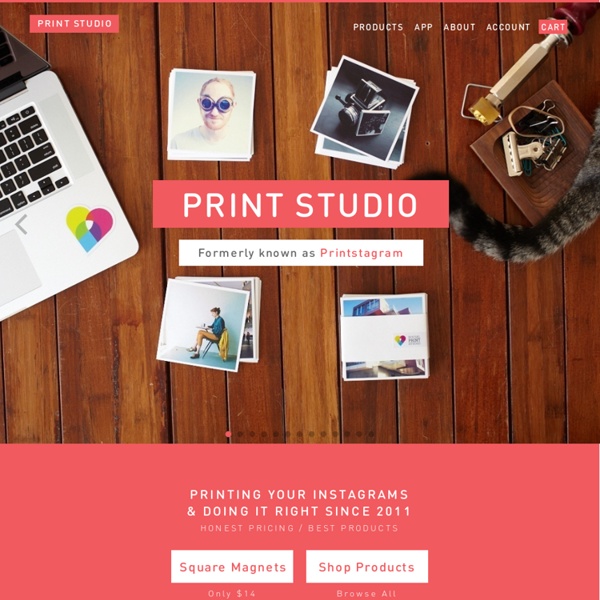 Your Shopping Cart Whoa there!This doesn't look right. More thingsyou might like! Chocolate Chip Cookie Dough Peanut Butter Cups Soooooo… you know that episode of Sex and the City where Miranda has to dump dish soap on top of chocolate cake just so she will stop eating it?? Uh. Yeeeeeah. These are like… of that caliber. The Image Makers: Inez And Vinoodh: style file: daily fashion, party, and model news In a new series, Style.com sits down with the best in the field of contemporary fashion photography to talk about both the process and the product. First up: the husband-and-wife Dutch shooters Inez van Lamsweerde and Vinoodh Matadin. At exactly 34 characters long, Inez van Lamsweerde and Vinoodh Matadin easily have the longest photo credit in the business. Admittedly, the count includes A-N-D, but that little linking word is crucial. Van Lamsweerde and Matadin are partners in every sense—creatively, romantically, as parents of their 9-year-old son Charles Star Matadin, and seemingly everything in between.

The microhydro plant My little paradise has a stream that provides enough water flow and head to run a small turbine, to provide electricity to my home. While writing this, the microhydro plant is being implemented, and here are some photos of the process. Since I usually like to start at the end, the first thing I built is the controller: It is an implementation of Jan Portegijs' "Humming Bird", with some changes and adaptations. The largest cost of the plant, by far, is in the piping for the rather long penstock. When the purchase was made and the truck arrived, we unloaded the pipes at different places, to get them as close to the installation area as possible.

Diptyque's Scent of Home To celebrate fifty years of creation, diptyque wanted to encapsulate the essence of its first boutique. The place where the company was born, a place that has a genuine soul. In essence, the intention was to interpret the memory of diptyque and its history, one that is constantly being reinvented through new projects, in the notes of the emerging emblematic fragrance. Named after the birthplace of the house, the 34 Boulevard Saint Germain is a unique scent for the body and home that encapsulates its first boutique with rare and precious fragrances, to give everyone a little part of this place and its rich history. Each of the five products that make up the line has a connection with the atypical and refined universe dreamed up in 1961 by Christiane Gautrot, Desmond Knox-Leet and Yves Coueslant, the three friends who started diptyque.

broccoli parmesan fritters Last week, it was pointed out to me that among the 750 recipes in the archives, there is but a single recipe that utilizes broccoli. Just one! (It’s a great one, though.) For comparison, there are 11 recipes that use cauliflower and 26 with mushrooms. What terrible oversight could have led to this? 40 free things to do in New York City Seeing the bulk of New York City's biggest attractions can mean spending a hefty chunk of a trip's budget on tickets. Empire State Building? $27. The Met? Apps Our planet's environmental future is usually described in terms of doom and despair. But now, for the first time, The World We Made presents a credible, positive vision of our planet that is green, fair, connected and collaborative. Based on extensive factual research, leading environmentalist Jonathon Porritt describes a sustainable world that is prosperous, exciting and healthy.

One can dream Once upon a time there were some very well-off folks in Vancouver who wanted big new homes. They called upon a builder by the name of Keystone Projects Ltd. and asked them to build the homes of their dreams. They asked for fancy kitchens and bathrooms and rooms for their pool tables and views to die for and a car lover's garage. People watching with a difference One of the many wonderful things the internet has brought us is the ability to indulge in people watching on a voyeuristic grand scale as photographers post their images of daily life on the likes of Tumblr, Flickr and even Twitter. Fashion bloggers such as The Sartorialist meanwhile, have turned the art into, well, an art and become household names as a consequence. But these photos we saw at Paris Photo take the medium into a whole new area. Michael Wolf, Tokyo Compression (2010)

5 Free iPhone Apps You Need for Family Travel Photo: Britt Reints With iPad apps to keep kids entertained and GPS systems to keep Mom and Dad from getting lost, today's family vacation has gone high-tech. We're not complaining. In fact, we're recommending a few more ways to let technology improve your next trip. The good news is all of these iPhone apps are free! 1.

A dream treehouse · Sheepy Me I've always wanted a treehouse when I was a child but living in a city made it a little difficult. Instead, we would built forts, tents or just crawl under the bed to play. It's weird right now but back then we really loved having those hideouts where nobody could find us. We could stay there for as long as we wanted. Telling horror stories and feeling like these were the safest places to be. But what happens if you're an adult and still dream of a treehouse?