Easter Eggs - Eeggs.com. Leak: Government spies snooped in 'Warcraft,' other games. Leaked documents show spy agencies pried into online video games"World of Warcraft" and "Second Life" were among those targetedDocuments were leaked by former contractor Edward SnowdenTech companies have called for tighter surveillance restraints (CNN) -- Spies with surveillance agencies in the United States and United Kingdom may have spent time undercover as orcs and blood elves, infiltrating video games like "World of Warcraft" in a hunt for terrorists "hiding in plain sight" online. 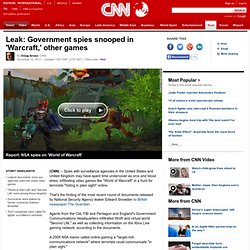 That's the finding of the most recent round of documents released by National Security Agency leaker Edward Snowden to British newspaper The Guardian. Agents from the CIA, FBI and Pentagon and England's Government Communications Headquarters infiltrated WoW and virtual world "Second Life," as well as collecting information on the Xbox Live gaming network, according to the documents. Demo of Shape Game Sample Included with Kinect for Windows SDK. TrueSkill Ranking System. So, what is so special about the TrueSkill ranking system? 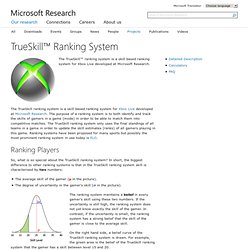 In contrast, if the uncertainty is small, the ranking system has a strong belief that the skill of the gamer is close to the average skill. On the right hand side, a belief curve of the TrueSkill ranking system is drawn. Maintaining an uncertainty allows the system to make big changes to the skill estimates early on but small changes after a series of consistent games has been played. 3D PacMan with Kinect and Unity3D. Features - Beyond Façade: Pattern Matching for Natural Language Applications. Beyond Façade: Pattern Matching for Natural Language Applications By bruce wilcox [Is the age of natural speech here? 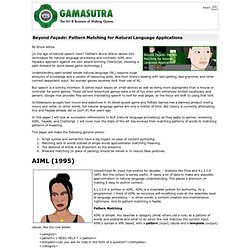 Telltale's Bruce Wilcox delves into techniques for natural language processing and contrasts AIML and Façade's approach against his own award-winning ChatScript, showing a path forward for word-based game technology.] Understanding open-ended simple natural language (NL) requires huge amounts of knowledge and a variety of reasoning skills. And then there's dealing with bad spelling, bad grammar, and terse context-dependent input. But speech is a coming interface. Scribblenauts accepts text nouns and adjectives in its latest puzzle game and Telltale Games has a planned product mixing nouns and verbs. In this paper I will look at successive refinements to NLP (natural language processing) as they apply to games, reviewing AIML, Façade, and ChatScript. 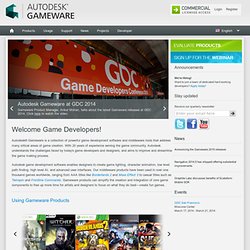 Click here to watch the video. Click here to learn how one of the largest mobile game developers leveraged the power of the Scaleform SDK to create Tiny Thief. Visit the AppStore to download this free, highly addictive tower defense game published using the Scaleform Mobile SDK. Our low priced licenses now include FMOD for audio support and render to texture capabilities for Unity developers. Click here to view render to texture in action. Click here to learn more about the new Autodesk Scaleform Unity/Mobile packages. Join our weekly webinar to learn how our solutions can help streamline your development pipeline. Autodesk® Gameware is a collection of powerful game development software and middleware tools that address many critical areas of game creation. InteractiveStory.net. Peter Molyneux demos Milo, the virtual boy. LAMS. LAMS, the Learning Activity Management System, is an open source Learning Design system for designing, managing and delivering online collaborative learning activities. 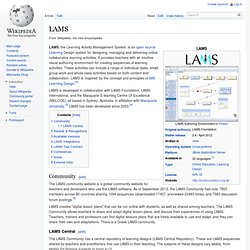 It provides teachers with an intuitive visual authoring environment for creating sequences of learning activities. These activities can include a range of individual tasks, small group work and whole class activities based on both content and collaboration. LAMS is 'inspired' by the concept and principles of IMS Learning Design.[2] LAMS is developed in collaboration with LAMS Foundation, LAMS International, and the Macquarie E-learning Centre Of Excellence (MELCOE), all based in Sydney, Australia, in affiliation with Macquarie University.[3] LAMS has been developed since 2003.[4] Community[edit] The LAMS community website is a global community website for teachers and developers who use the LAMS software.

LAMS creates "digital lesson plans" that can be run online with students, as well as shared among teachers. Notes[edit] Downloads - LAMS 2. This page is a collection of all the different "bits" that you can download for LAMS. 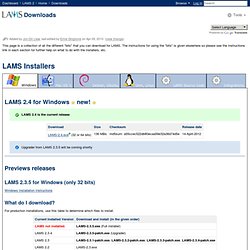 The instructions for using the "bits" is given elsewhere so please see the Instructions link in each section for further help on what to do with the installers, etc. LAMS 2.4 for Windows new! Previews releases LAMS 2.3.5 for Windows (only 32 bits) Windows Installation Instructions What do I download? For production installations, use this table to determine which files to install.