Mega Music - Collection. An introductory video about the Artful Genius vision. Harpercollinsbc5. 7 Alternatives to Pandora and Last.FM. Whether you are annoyed by the ads on Pandora, the limited number of skips, or the abyss of cruel 30-second song teasers from Last.FM, many online listeners are growing weary of mainstream methods of hearing new music. 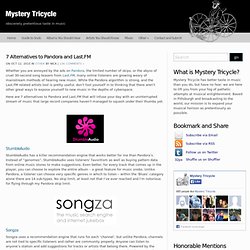 While the Pandora algorithm is strong, and the Last.FM related artists tool is pretty useful, don’t fool yourself in to thinking that there aren’t other great ways to expose yourself to new music in the depths of cyberspace. Here are 7 alternatives to Pandora and Last.FM that will infuse your day with an uninterrupted stream of music that large record companies haven’t managed to squash under their thumbs yet. StumbleAudio StumbleAudio has a killer recommendation engine that works better for me than Pandora’s.

Lite-Brite. Videoart   The Umbilical Cord. Chrome Experiments - Home. Build your own kaleidoscope. 12 Classic Movie Moments Made Possible by Abuse and Murder. Director Werner Herzog was a Weapon of Mass Destruction German director Werner Herzog is best known for being crazy. 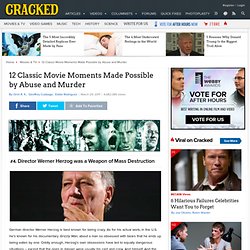 As for his actual work, in the U.S. he's known for his documentary Grizzly Man, about a man so obsessed with bears that he ends up being eaten by one. Oddly enough, Herzog's own obsessions have led to equally dangerous situations -- except that the ones in danger were usually his cast and crew. And himself. And the local villagers. He looks like he's permanently about five seconds from collapsing in on himself. Wait, what? For a while there, Herzog seemed bound and determined to keep his crew in a constant state of terror. In Aguirre: The Wrath of God, he told the story of a conquistador and his men floating down a river in the middle of the godforsaken jungle.

You don't need CGI when you have crazy German people. Is that gin? Cannibal Holocaust Was Pretty Much What the Name Implies Not what we expected from the subdued poster. It's always the pretty ones ... The Great Geek Manual » Japan 101. Japanese find sleep, shelter in cyber cafes May 9 2007 0 Comments 530 views More proof that I should have been born Japanese. 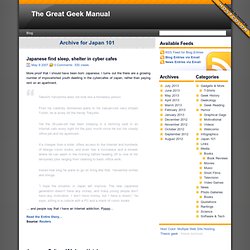 I turns out the there are a growing number of impoverished youth dwelling in the cybercafes of Japan, rather than paying rent on an apartment. Takeshi Yamashita does not look like a homeless person.From his carefully distressed jeans to his casual-cool navy striped T-shirt, he is every bit the trendy Tokyoite.Yet the 26-year-old has been sleeping in a reclining seat in an Internet cafe every night for the past month since he lost his steady office job and his apartment.It’s cheaper than a hotel, offers access to the Internet and hundreds of Manga comic books, and even has a microwave and a shower where he can wash in the morning before heading off to one of his temporary jobs ranging from cleaning to basic office work.Asked how long he plans to go on living like that, Yamashita smiles and shrugs.

“I hope the situation in Japan will improve. What's The Difference Between Game Mechanics in the Enterprise and Good Management? We covered the emerging trend of gamification - the application of game mechanics outside of games - in November. 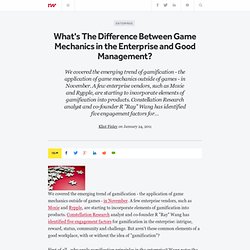 A few enterprise vendors, such as Moxie and Rypple, are starting to incorporate elements of gamification into products. Constellation Research analyst and co-founder R "Ray" Wang has identified five engagement factors for gamification in the enterprise: intrigue, reward, status, community and challenge. But aren't these common elements of a good workplace, with or without the idea of "gamification"? First of all - why apply gamification principles in the enterprise? Wang notes the following applications: Training Collaboration and knowledge sharing Customer loyalty programs Ad network optimization Virtual goods and currencies. I can see the applications for customer-facing programs, but how well will internal programs work out? Intrigue is obviously the hard part. When we covered gamification before we quoted Margaret Robertson: