User Interface. Mike Kruzeniski – How Print Design is the Future of Interaction. This post describes “How Print Design is the Future of Interaction,” a talk I gave at SXSW Interactive on March 12, 2011. The slides from the talk are available to view on Slideshare, and you can see some of the discussion that followed on Twitter here. Introduction There are three areas that I covered in the talk. First, how the visual language of UI has evolved and been shaped in to what we find in the interfaces we are familiar with today. Second, I’ll discuss why I think a new approach to the visual design of interfaces, influenced by Print Design, is emerging and necessary. When I talk about “Print” here, I’m not interested in the literal transfer of printed media on to screen, like we see in some applications which try to recreate the exact textures and layouts of newspapers, for example.

A Brief History of Interaction Design If we trace the history of modern User Interface, it all begins with Vannevar Bush’s Memex machine. Artifacts and Information Learning from Print 1. 2. 3. 4. 5. The Future Of UX Design: Tiny, Humanizing Details. Dan Saffer, like many designers, likes to quote Charles Eames. 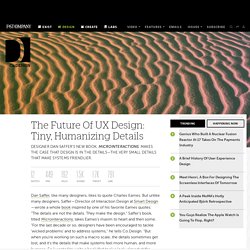 But unlike many designers, Saffer—Director of Interaction Design at Smart Design—wrote a whole book inspired by one of his favorite Eames quotes: "The details are not the details. They make the design. " Saffer’s book, titled Microinteractions, takes Eames’s maxim to heart and then some. ‘Beautifully-Crafted Microinteractions’: Dan Saffer’s Latest Book Hits Big on the small stuff. Releasing later this year, renowned interaction design guru Dan Saffer’s latest book Microinteractions is bound to spark some new thinking patterns for physical and digital good designers…and we have your passport to the pre-release excerpt here. 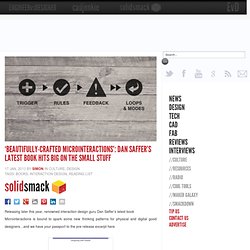 Dan Saffer is no stranger to interaction design. Having written three previous books on the subject-Designing for Interaction, Designing Gestural Interfaces, and Designing Devices, the guy has you fairly well covered regardless if you’re just starting out or need a solid reference library. As an industrial design student, I consistently referred to his literature in my final year of school–where I veered off into the philosophies of interaction design heavily in my final projects. But what is a microinteraction? According to Dan: Microinteractions are contained product moments that revolve around a single use case—they have one main task. Microinteractions are good for: A Trigger initiates a microinteraction. Self-study Interaction Design. In classes and cocktail hours, lots of people ask me either how they can switch careers into interaction design, or how they can improve their self-trained “IxD” chops. 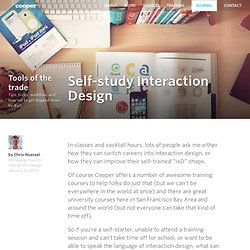 Of course Cooper offers a number of awesome training courses to help folks do just that (but we can’t be everywhere in the world at once) and there are great university courses here in San Francisco Bay Area and around the world (but not everyone can take that kind of time off). So if you’re a self-starter, unable to attend a training session and can’t take time off for school, or want to be able to speak the language of interaction design, what can you do?

How can you make those first steps to getting more familiar with the field? I recommend reading up on some of the fundamentals, join up with practitioners online, and actually start designing. More on each follows. Enhancing User Interaction With First Person User Interface. Advertisement Though many computer applications and operating systems make use of real-world metaphors like the desktop, most software interface design has little to do with how we actually experience the real world. 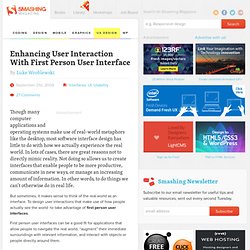 In lots of cases, there are great reasons not to directly mimic reality. Not doing so allows us to create interfaces that enable people to be more productive, communicate in new ways, or manage an increasing amount of information. In other words, to do things we can’t otherwise do in real life. But sometimes, it makes sense to think of the real world as an interface. First person user interfaces can be a good fit for applications that allow people to navigate the real world, “augment” their immediate surroundings with relevant information, and interact with objects or people directly around them.

Navigating the Real World When coupled with a digital compass (or a similar technology) that can detect your orientation, things get even more interesting. Augmented Reality.