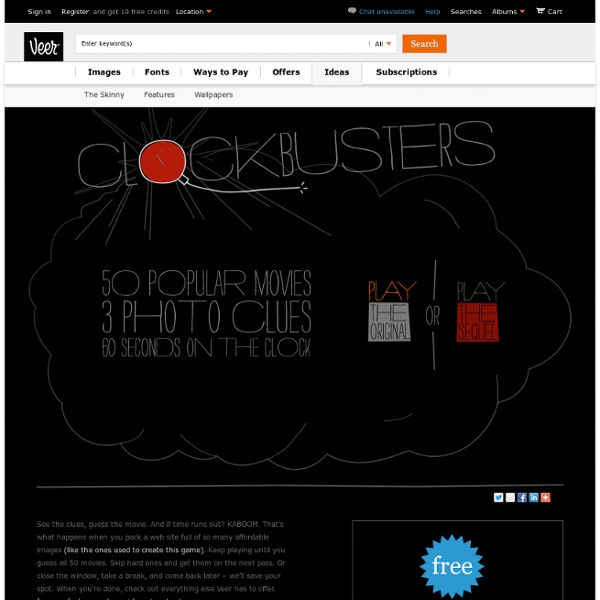 See the clues, guess the movie. And if time runs out? KABOOM. That’s what happens when you pack a web site full of so many affordable images (like the ones used to create this game). Keep playing until you guess all 50 movies. Skip hard ones and get them on the next pass.

Coin Operated Vending Machine Robbery – Learn how people rob pop, arcade and candy machines. Robbing Vending machines is not as hard as it seems and that is the reason why you will notice this being done a lot. This article on Coin Operated Vending Machine Robbery explains how people succeed in defeating the vending machines. Part 1 – How to Rob Pop Machines for money and pop Take an empty 2 liter bottle of pop and fill it with luke warm water. Then put about a good 1/2 cup of salt in and mix it up real well.

Zeitgeist Conspiracy Movie was released in 2007 on Google Videos and has since spread like mad across the internet and conspiracy blogs. It has three parts showing the falsities behind Christianity, 9/11 and governments, respectively: {*style:<b>Part I: The Greatest Story Ever Told (Christianity is a myth) </b>*} The Great Geek Manual » Japan 101 Japanese find sleep, shelter in cyber cafes May 9 2007 0 Comments 530 views More proof that I should have been born Japanese. I turns out the there are a growing number of impoverished youth dwelling in the cybercafes of Japan, rather than paying rent on an apartment. Takeshi Yamashita does not look like a homeless person.From his carefully distressed jeans to his casual-cool navy striped T-shirt, he is every bit the trendy Tokyoite.Yet the 26-year-old has been sleeping in a reclining seat in an Internet cafe every night for the past month since he lost his steady office job and his apartment.It’s cheaper than a hotel, offers access to the Internet and hundreds of Manga comic books, and even has a microwave and a shower where he can wash in the morning before heading off to one of his temporary jobs ranging from cleaning to basic office work.Asked how long he plans to go on living like that, Yamashita smiles and shrugs.

Party A typical decorated birthday cake with candle to create a party atmosphere A party is a gathering of people who have been invited by a host for the purposes of socializing, conversation, recreation or as part of a festival. A party will typically feature food and beverages, and often music and dancing or other forms of entertainment. 2011 Game of the Year Awards - Overall - Article - gamrReview Best First-Person Shooter: Bulletstorm Bulletstorm stands out amidst the fatigue-inducing mass of holiday shooter sequels, with, amongst other things, a unique art style, vibrant colour pallette, and over-the-top kill system. Heck, even its release date made it stand out from the crowd. It didn't hit all the right notes, but it hit enough of them, and offered something a little bit different along the way. Runner-Up - Call of Duty: Modern Warfare 3Reader's Choice - Killzone 3 Best Third-Person Shooter: Uncharted 3: Drake's Deception

Sour Cream Noodle Bake Raise your hand if you love recipes with the word “Bake” in the title. This is a classic old recipe shared with my mom by her friend Betty Daley. I always loved it growing up, but the first time I made it for my own household years ago, it was met with mixed reviews. The original recipe calls for quite a bit of sour cream, and since my nuclear family is a little sensitive to large amounts of the stuff, I’ve adapted it through the years to suit the picky palates of the people I live with. Picky palates of the people. 5 Ways Television Went Crazy Since I Quit Watching in 2003 Sometime in early 2003, I gave up television. It wasn't some conscious decision to try to become a more productive person or anything of the sort. I just found that the remote had become just an extra unused object on my computer desk that got in the way of my mouse, like job applications and intervention letters. But eventually, you find that without it you miss out on a lot of social interactions, especially at work. Over seven years, I had a lot of moments that went like this: "Did you see Family Guy last night?"

What's The Difference Between Game Mechanics in the Enterprise and Good Management? We covered the emerging trend of gamification - the application of game mechanics outside of games - in November. A few enterprise vendors, such as Moxie and Rypple, are starting to incorporate elements of gamification into products. Constellation Research analyst and co-founder R "Ray" Wang has identified five engagement factors for gamification in the enterprise: intrigue, reward, status, community and challenge. But aren't these common elements of a good workplace, with or without the idea of "gamification"? First of all - why apply gamification principles in the enterprise? Wang notes the following applications:

18 Accidental Penis Photos (SFW) - Excuse Meme As you may already know, random objects can often unintentionally look a bit too phallic. Click to check out 18 of the most hilarious, unfortunate accidental penis pictures! It is possible to understand Engineers - Where there's a will, there's a way. Understanding Engineers #1 Two engineering students were biking across a university campus when one said, "Where did you get such a great bike?" The second engineer replied, "Well, I was walking along yesterday, minding my own business, when a beautiful woman rode up on this bike, threw it to the ground, took off all her clothes and said, "Take what you want." 12 Classic Movie Moments Made Possible by Abuse and Murder Director Werner Herzog was a Weapon of Mass Destruction German director Werner Herzog is best known for being crazy. As for his actual work, in the U.S. he's known for his documentary Grizzly Man, about a man so obsessed with bears that he ends up being eaten by one. Oddly enough, Herzog's own obsessions have led to equally dangerous situations -- except that the ones in danger were usually his cast and crew. And himself.

Pope To Ease Up On Jesus Talk VATICAN CITY—Acknowledging that he has perhaps been laying it on a little thick with the religion stuff lately, Pope Benedict XVI said Wednesday that he was making a concerted effort to take all his incessant Jesus talk down a notch. The Supreme Pontiff admits that, overall, his sermons and public addresses have been a little Jesus-heavy. Though he reassured followers that he was still the head of the 1.1 billion–member Roman Catholic Church and an unwavering believer in the divinity of Christ, the pope suggested he might have an easier time communicating with people if he wasn't up in everyone's face about Jesus all the time. "I just want to rein it in a smidge," Benedict said.

The Perfect Sunday Afternoon Sandwich Weekends come and go so fast, don’t they? By the time Sunday arrives, it seems like all of the things I needed to accomplish on the weekend are still hanging around- laundry, grocery shopping, and preparing for the work week ahead. Since my fridge is pretty bare once Sunday rolls around, it’s easy to fall into the trap of stopping at the sandwich shop on the corner by our apartment before we go grocery shopping. But if there is one thing we always have on hand in our freezer, it is bacon. I don’t use it very often, but Adam always seems to sneak a pound in our grocery cart “just to have on hand.” That boy loves bacon way too much! The 100 Best Films Of World Cinema From Brazil to Japan to France and Senegal, from Neo-Realism to Dogme to J-horror, we've compiled a list of the very best films not in the English language (note: features, not documentaries). So rustle up some sushi, strike up a gauloise and make sure you've locked your bicycle as we count down the top 100 world cinema movies... 100. Night Watch Year: 2004Country: RussiaDirector: Timur Bekmambetov It's Buffy meets The Matrix meets Blade!