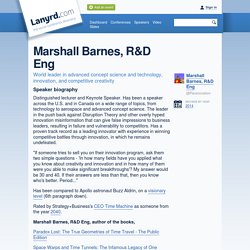 Has been a speaker across the U.S. and in Canada on a wide range of topics, from technology to aerospace and advanced concept science. The leader in the push back against Disruption Theory and other overly hyped innovation misinformation that can give false impressions to business leaders, resulting in failure and vulnerability to competitors. Has a proven track record as a leading innovator with experience in winning competitive battles through innovation, in which he remains undefeated. "If someone tries to sell you on their innovation program, ask them two simple questions - 'In how many fields have you applied what you know about creativity and innovation and in how many of them were you able to make significant breakthroughs'? 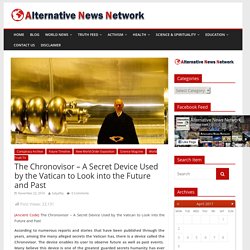 The device enables its user to observe future as well as past events. Many believe this device is one of the greatest guarded secrets humanity has ever had. Some even believe it is a crucial ‘tool’ which has allowed the Vatican to preserve its influence and power through the years. Ever since H. The news article indicated that dozens of scientists created an artifact that allowed them to photograph the past, and even witness important historical accounts directly connected with Jesus Christ. The alleged device –which according to many is nothing more than science fiction— was built in the 1950’s by a team of scientists led by Father Pellegrino Maria Ernetti, an Italian physicist who eventually became a priest.

Australian Scientists Prove Time Travel Is Possible. By Vandita | We Are Anonymous Some physicists are convinced that time travel is possible. 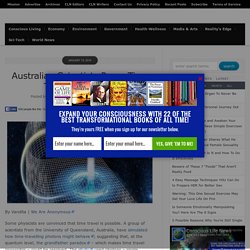 A group of scientists from the University of Queensland, Australia, have simulated how time-travelling photons might behave; suggesting that, at the quantum level, the grandfather paradox – which makes time travel impossible – could be resolved. The study used photons – single particles of light – to simulate quantum particles travelling back through time. By studying their behavior, the scientists revealed possible strange aspects of modern physics. “The properties of quantum particles are ‘fuzzy’ or uncertain to start with, so this gives them enough wiggle room to avoid inconsistent time travel situations. Time Travel, Mars Colony and Political Control of the Human Population. The U.S. government has had Tesla-based quantum access time travel technology for over 40 years. 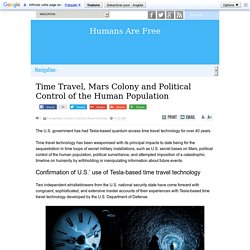 T... The U.S. government has had Tesla-based quantum access time travel technology for over 40 years. Time travel technology has been weaponised with its principal impacts to date being for the sequestration in time loops of secret military installations, such as U.S. secret bases on Mars, political control of the human population, political surveillance, and attempted imposition of a catastrophic timeline on humanity by withholding or manipulating information about future events.

Time Traveler Who Spent 2 Years in The Future 2749 Tells All. (Before It's News) Al Bielek discusses what he remembers from his 6 weeks spent in the year 2137 and 2 years he spent in 2749. 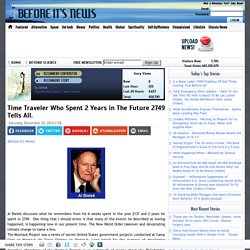 One thing that I should stress is that many of the events he described as having happened, is happening now in our present time. The New World Order takeover and devastating climate change to name a few. The Strange Case Of Rudolph Fentz, The Victorian Time Traveler – Time always flows forward one second at a time, but for some reason, a man named Rudolph Fentz never got this memo. 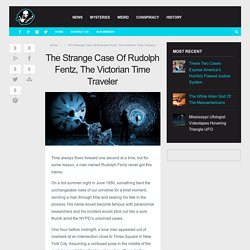 On a hot summer night in June 1950, something bent the unchangeable rules of our universe for a brief moment, sending a man through time and sealing his fate in the process. His name would become famous with paranormal researchers and his incident would stick out like a sore thumb amid the NYPD’s unsolved cases. One hour before midnight, a lone man appeared out of nowhere at an intersection close to Times Square in New York City.

Whistleblower Spills Beans: ‘I Spent Three Years Serving on Deep Space Fleet’ Whistleblower Captain Kaye is the author of some fantastic claims about the existence of a secret Space Armada owned and operated by a global organization called the Earth Defense Force. 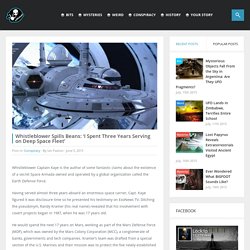 Having served almost three years aboard an enormous space carrier, Capt. Kaye figured it was disclosure time so he presented his testimony on ExoNews TV. Ditching the pseudonym, Randy Kramer (his real name) revealed that his involvement with covert projects began in 1987, when he was 17 years old. He would spend the next 17 years on Mars, working as part of the Mars Defense Force (MDF), which was owned by the Mars Colony Corporation (MCC), a conglomerate of banks, governments and tech companies.

Kramer’s team was drafted from a special section of the U.S. Kramer’s good standing with the MCC ensured his recruitment into another one of their branch programs, the Earth Defense Force. The fleet of space vessels had various propulsion systems, all superior to anything available on Earth at that time. Project-Pegasus-The-Hall-of-Water-at-Damanhur-may-be-Portal-4-28-10.pdf. Project-Pegasus-The-Face-of-Jesus-5-3-10.pdf.