Visa Requirement Guide for Filipinos. UN observers and members There are certain counties wherein Pinoys are allowed to enter, if there are in possession of a resident permit or a valid visa for the United Kingdom, the United States, Schengen Area, Ireland or Canada. 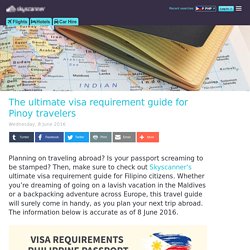 Non members of the UN Traveling to an off-the-beaten-path destination? Headed to Taiwan or Hong Kong? Here are the Visa requirements for Pinoys who want to visit restricted zones, partially recognized countries, various territories and disputed areas. Asia Africa North Atlantic and Caribbean Europe Oceania Antarctica and South Atlantic Vaccines Many countries in Africa require each incoming passenger to secure a Carte Jaune, or also referred as International Certificate of Vaccination, including ABTC (APEC Business Travel Card) holders who are traveling on business purposes are not required to secure a visa to these countries Skyscanner is the world’s ultimate travel search engine, helping Pinoy travelers save a ton of money on car rental, hotels and flights. Where You Can (and Can't) Drink Tap Water in Europe.

Getty Budapest is known for its picturesque water scenes, but actually drinking the water is another story. 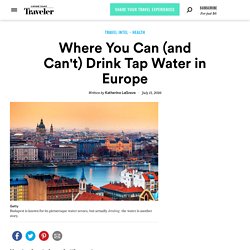 Here's when to buy a bottle—or two. Sit down at a restaurant in Europe, and you'll most likely first be asked about water preferences before anything else: Still, sparkling, or tap? And while this may seem a strange question to U.S. travelers used to glasses of ice-cold water filled (and refilled) without question, it's actually an issue in Europe. Emirates Named World's Best Airline. Getty More than 19 million surveys were completed on the world's airlines. 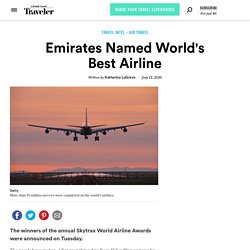 The winners of the annual Skytrax World Airline Awards were announced on Tuesday. The people have spoken: After crunching data from 19.2 million surveys by customers hailing from more than 104 countries, airline and airport review and ranking website Skytrax today announced that Emirates is the world's best airline. 15 Travel Apps To Log Your Globe-Trotting Trips. Time to get those legs moving. 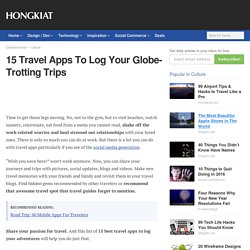 No, not to the gym, but to visit beaches, watch sunsets, rejuvenate, eat food from a menu you cannot read, shake off the work-related worries and heal stressed out relationships with your loved ones. There is only so much you can do at work. But there is a lot you can do with travel apps particularly if you are of the social media generation. “Wish you were here!” Won’t work anymore. Recommended Reading: Road Trip: 60 Mobile Apps For Travelers Share your passion for travel. The Top 10 MOST BEAUTIFUL COUNTRIES in the World. The world's most beautiful city, the most inspiring cultural treasures, and magnificent scenery: Nowhere else in the world will you find a bigger concentration of beauty. 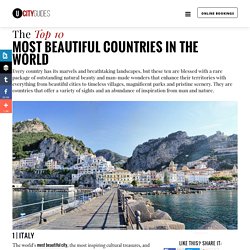 There's Venice, Florence and Rome with their varied architecture, the natural masterpiece that is Tuscany with its rolling hills, vineyards and snow-peaked mountains. Then there's the perfect naturalist painting that is the Amalfi Coast or Lake Maggiore and the Alps and you get the sense that no country on Earth offers as much beauty anywhere you turn as Italy. The most common image of Spain is of the dreadful overdevelopment of the Costa del Sol or of the coastline of some of the Balearic Islands, but Spain is so much more than that. It's perhaps the most diverse country in the world, with everything from white Mediterranean villages to sophisticated urban centers. Paris exudes the most perfect atmosphere of cultural grandeur but although the capital gets all the attention, France offers so much more. The TOP 10 GREATEST BOULEVARDS, Grand Avenues and Streets of the World. 1 | CHAMPS-ELYSEES, Paris One of the world's great urban wonders, this boulevard is perhaps the most famous in the world. 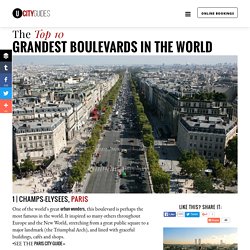 It inspired so many others throughout Europe and the New World, stretching from a great public square to a major landmark (the Triumphal Arch), and lined with graceful buildings, cafés and shops. •SEE THE PARIS CITY GUIDE» 2 | BROADWAY, New York. The World's 10 MOST BEAUTIFUL CAFÉS. 1 | CAFE NEW YORK, Budapest This Budapest legend was the meeting place of artists in the early 20th century. 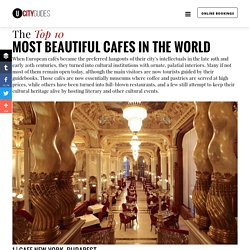 Top 10 MASTERPIECES and Greatest Works of Art of All Time. It's the masterpiece of all masterpieces, the most famous, most discussed and most enigmatic of all paintings. 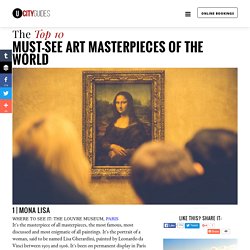 It's the portrait of a woman, said to be named Lisa Gherardini, painted by Leonardo da Vinci between 1503 and 1506. It's been on permanent display in Paris since 1797, except for a period of two years when it was stolen in 1911 before returning to the Louvre Museum in 1913. The depicted smile has continuously captured the world's imagination ever since. •SEE THE PARIS CITY GUIDE» The World's Best Must-See Art Collections. There are always long lines at the door but it's worth the wait to see the world's greatest and most famous museum. 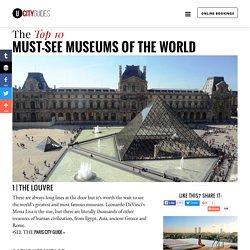 Leonardo DaVinci's Mona Lisa is the star, but there are literally thousands of other treasures of human civilization, from Egypt, Asia, ancient Greece and Rome. •SEE THE PARIS CITY GUIDE» This gigantic museum has the world's largest collection of paintings. 9 awesome attractions opening in 2016. The Middle East will get its most advanced snow park in Doha. 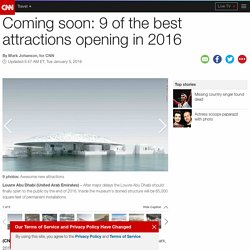 "Hunger Games" fans will step into the shoes of Katniss Everdeen in Dubai. And a life-sized replica of Noah's Ark will rise above the bluegrass meadows of northern Kentucky to become the planet's largest wooden structure. A look at these and more on our cultural calendar for 2016, as we highlight some of the most anticipated attractions scheduled to open around the globe. MORE: The 9 new buildings set to define cities in 2016 Dubai Parks & Resorts (United Arab Emirates) The middle of a sweltering desert is hardly an ideal location for a theme park -- much less a 25-million square-foot theme park complex (2.3 million square meters). But that's exactly what the United Arab Emirates has planned with its new Dubai Parks & Resorts, whose film-themed attractions will sit in air-conditioned comfort.

Travelers Beware: Hotel Credit Card Scam. We all love to travel, who doesn’t? But falling victims to scams may just ruin our whole vacation. Yesterday, James Deakin shares this warning to fellow travelers are 2 of his friends had just fallen victim to what some claim to already be an age old scam. “Guys, a piece of travel advice that could save you a lot of headache. This has happened now to 2 of my friends in the last week so it is definitely worth passing on.

This is a pretty clever scam. Typically when checking in, you give the front desk your credit card (for any charges to your room) and they don’t retain the card.You go to your room and settle in. Not thinking anything wrong, since the call seems to come from the front desk you oblige. If you ever encounter this scenario on your travels, tell the caller that you will be down to the front desk to clear up any problems. Feel free to share this. Don’t Panic! What to do When You are Victimized of “Laglag Bala” in NAIA. 25 little places which are just too wonderful to be real. The following little places are undoubtedly some of the most magnificent and fantastical on the planet. They look like illustrations from fairy tales, captivating you with their seemingly otherwordly perfection. You’re left with just one question in your head: which one should I head to first? Yangshuo County, China Burano, Italy Dazhai, China.

Packing Therapy In 10 Easy Steps  I am an awesome packer. I pack light, never bring more than what fits in a carry-on, and always have what I need. But I'm horrible at packing. If it were possible to be diagnosed with a packing disorder, I would be. Here are my symptoms: • I start stressing early that I should be packing, but do nothing, except stress and feel bad about myself for doing nothing Sound familiar? Cntraveler. 40 Unusual and Creative Statue and Sculpture Art.

25 Of The Most Beautiful Villages In Europe. Advertisement There are a lot of beautiful village all over the world with amazing nature and spectacular views. Airports you'll want to have a long layover in.