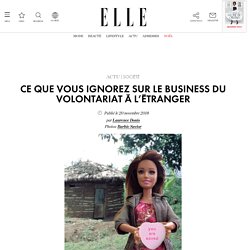 The Changing Trends of Volunteer Travel - Learning Service. More than any other time in history, the current generation lives in a world that is globally interconnected. 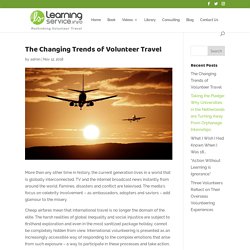 TV and the internet broadcast news instantly from around the world. Famines, disasters and conflict are televised. NBS Investigates - The Messiahs That Were Not. Voluntourism from a childrens rights perspective Yuri Torres. Opinion: Voluntourism Leaves Patients with Poor and Inconsistent Medical Care... The stakes of getting into medical school are higher than ever, and many students are looking for ways to make their resumes the “diamond in the rough.” 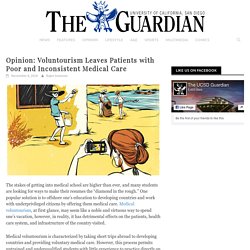 One popular solution is to offshore one’s education to developing countries and work with underprivileged citizens by offering them medical care. Medical voluntourism, at first glance, may seem like a noble and virtuous way to spend one’s vacation, however, in reality, it has detrimental effects on the patients, health care system, and infrastructure of the country visited. Medical voluntourism is characterized by taking short trips abroad to developing countries and providing voluntary medical care.

However, this process permits untrained and underqualified students with little experience to practice directly on patients who require a higher degree of care and sometimes without the careful policies of U.S. malpractice law. Voluntourism: Who is it really helping? Voluntourism: Doing more harm than good? The business of voluntourism: do western do-gooders actually do harm? Baby rescue is the ultimate volunteer experience. 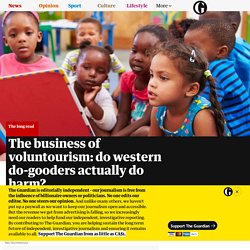 At Hope of Life International, a Christian mission in rural Guatemala, a rescue team springs into action when news arrives that a baby is dangerously ill in a nearby mountain village. The mission, which hosts hundreds of volunteers from North America every month, sends a caravan of Jeeps, canoes and an ambulance to bring the child to its hospital. On the charity’s website, you can see photos of volunteers, their faces rapt with grim determination, walking down a steep mountain path or fording a river, holding tiny babies wrapped in blankets. A video shows dramatic scenes in which Carlos Vargas, Hope of Life’s founder, rescues a baby alongside volunteers, the music pulsing and urgent.

How to Really Help Children Abroad. Seven years ago, Oasis hired a social worker to develop a program to work with girls’ families, so that the girls could go home once the abusers were gone. It supports, counsels and monitors the families and helps them start small businesses. Corbey Dukes, the director, said Oasis has been able to reunite about half of the girls with their mothers or another relative. But for some girls, their own family isn’t an option, so Mr. Dukes went to Casa Viva in Costa Rica to learn about foster care. Guatemala is just starting a foster care program.

Family care will be a long time in coming. Mini-sodes — What The Pho Travel Podcast. Let’s be critical about International Volunteering - a reminder - Every year, around 1.6 million people travel the world as international volunteers. 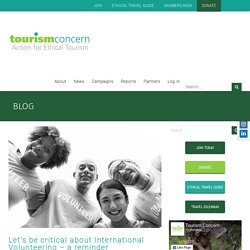 That is impressive, especially if we think of the fact that volunteering is demanding and pretty expensive. But how great it is that so many people, youngsters especially, care about social development and humanitarian projects abroad? Maybe not as great as it sounds. It is no surprise that international volunteering has become so popular with Millennials. There are perils to short-term volunteering. Sabith Khan By Sabith Kahn. 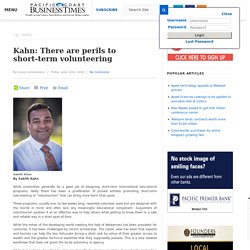 Tackling Heropreneurship. Step aside, Superman, there’s a new kind of superhero in town. 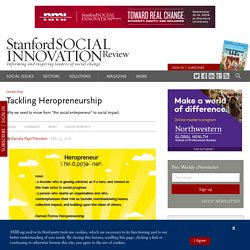 We’ve entered an era of heropreneurship, where reverence for the heroic social entrepreneur has led countless people to pursue a career path that promises opportunities to save the world, gain social status, and earn money, all at the same time. In business schools across North America and Europe, the longest waiting lists—once reserved for investment banking interviews—are now shared by entrepreneurship training courses and social impact events. 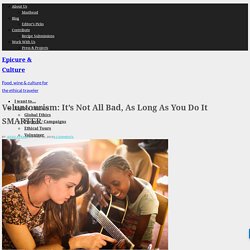 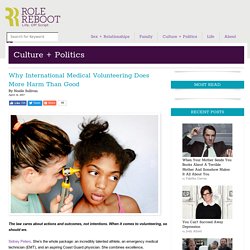 When it comes to volunteering, so should we. Sidney Peters. She’s the whole package: an incredibly talented athlete, an emergency medical technician (EMT), and an aspiring Coast Guard physician. She combines excellence, perseverance, and a sincere desire to do good under adverse circumstances. Peters is the starting goalie of the University of Minnesota Women’s Hockey Team. Child protection - How to better protect children in destination countries. On March 9th 2018, child protection experts and representatives from the tourism industry came together for a penal discussion organized by ECPAT Germany and Tourism Watch during the International Tourism Fair (ITB) in Berlin. 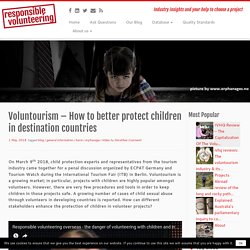 Voluntourism is a growing market; in particular, projects with children are highly popular amongst volunteers. Profil18 voluntourism final en 0 0. VOLUNTOURISM: HELPFUL OR HARMFUL? — ALTO. Photo by bill wegener on Unsplash We can see similarity in these tasks, and they are clearly related, but without attention we may often conflate the two and in so doing miss the differences in very important ways.

The extent to which they are conflated may in fact be a pointer to questions of detriment and benefit for a community in contrast to the voluntourist. Prospective voluntourists will consider the location of the destination, cost to themselves, program duration, proximity to ‘off-piste’ activity, safety, and any number of other similarly personal considerations. Misconceptions re: VSO, UNV & Peace Corps. Volunteering Abroad? Read This Before You Post That Selfie.

Think before you snap that selfie. That's the serious message of a joint campaign created by two groups that have spent the past few years poking fun at problematic photos taken by Western volunteers. They often have the tendency to paint themselves as saviors to needy people in low-income countries. The campaign, launched this month, offers guidelines and a cheeky video to first-time travelers or young volunteers eager to capture every moment of their vacation or mission on Facebook or Instagram. Visual Rhetoric of Voluntourism. Earlier work by Borgerson and Schroeder (2002, 2005) comes to similar conclusions. The Trouble with Medical "Voluntourism" The voluntourism that is turning orphanages into tourist attractions - The Oxford Student. Share Tweet Email In 2016, J.K. Voluntourism warning: 'A dash of enthusiasm does not qualify' Volunteering Abroad - How To Do It. Updated April 20, 2017. Voluntourism as Neoliberal Humanitarianism – ZERO ANTHROPOLOGY.

Why Africa Doesn't Need More Volunteers. Martin Luther King Jr. explained that he had a dream of peace among the nation. Special Report: The Amazon Is the New Frontier for Deadly Wildlife Tourism. The do-good dilemma. Daniela Papi Thornton - Rise of Social Entrepreneurship. Voluntourism and child trafficking into orphanages Final. The Social Media Guide — Radi-Aid Awards. Spreading Love Everywhere You Go: Who Benefits From Volunteering? Why International Medical Volunteering Does More Harm Than Good - Role Reboot. Volunteer travel: experts raise concerns over unregulated industry. How I discovered the 'voluntourism' con in Peru. Voluntourism: When You Take More Than You Leave Behind. What You Should Know Before Your Next Volunteer Trip. Let's save Africa! - Gone wrong. Who Wants To Be A Volunteer? Dear volunteers in Africa: please don't come help until you've asked yourself... The Voluntourist - A film about voluntourism The Voluntourist.