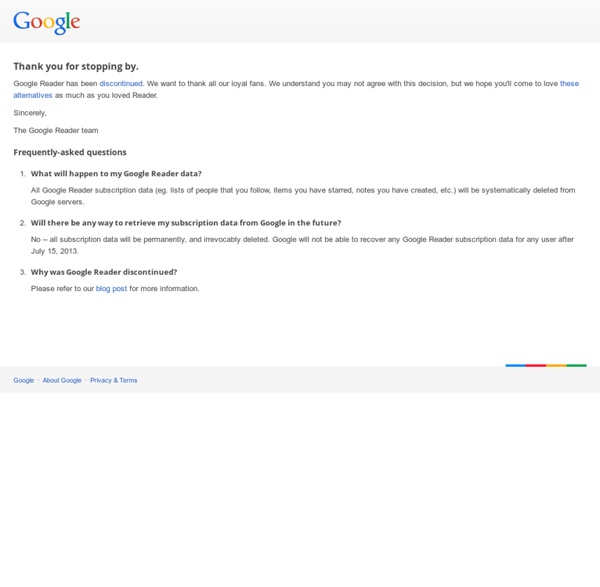 Google Reader has been discontinued. We want to thank all our loyal fans. We understand you may not agree with this decision, but we hope you'll come to love these alternatives as much as you loved Reader. Sincerely, The Google Reader team Frequently-asked questions

in Google Wave Google just opened the Google Wave developer sandbox for federation. Developers can now begin prototyping tools against WaveSandbox.com. Google tested earlier versions of Wave with a small number of developers on the Wave sandbox and this server will now become the platform for testing interoperability between different Wave servers. Blog directory – News from Google Whether it’s a product or feature launch or a cool new initiative, chances are that you’ll read about most news from Google on one of our blogs. We started blogging in May of 2004 and now have a network of company blogs that cover topics as diverse as our renewable energy policies, product updates, developer challenges and code snippets, and information for advertisers and partners. The official blog for information about the AdWords, AdSense, DoubleClick and AdMob APIs and SDKs Das offizielle deutsche AdSense-Blog El blog oficial de AdSense en español Le Blog officiel AdSense en français Il blog ufficiale di AdSense in Italiano Het Officiële Nederlandse Google AdSense Blog Oficjalny polski blog o AdSense O blog oficial do AdSense em português Google AdSense 中文網誌 Google’a içeriden bir bakış.

20 ways to get people to believe in your ideas Ideas are powerful. Their power lies not in the idea itself, but in getting others to believe and take action. In short, ideas can create a movement. A movement is simply a group of people working together to advance similar ideas. A movement can be as simple as working with your boss on a project as complex as overthrowing a dictator or as crazy as a mosh pit at a rock concert. Etiquette for a Gentleman Posted 1 month ago 629 notes Posted 2 months ago 4,851 notes list of URL shorteners It seems like everyone and their mother now has their own URL shortening service, or at least their own short domain. Short URLs have almost become a branding thing. But as the use of short links keeps going up, the market share among different URL shortening services is fragmenting. The biggest URL shortening service is still bit.ly, with more than 2 billion links a month, but it now only has a 56 percent market share of short links on Twitter, compared to nearly 80 percent last summer. The drop wasn’t noticed before because TweetMeme, which keeps statistics on short URL market share, pulled its stats page for a couple months as part of a site upgrade to make it more scalable.

Google Wave As we announced in August 2010, we are not continuing active development of Google Wave as a stand-alone product. Google Wave will be shut down in April 2012. This page details the implication of the turn down process for Google Wave. Stage 1: Google Wave is read-only -- January 31, 2012 In this stage, you will no longer be able to create or edit waves. Marking a wave as read will also not be saved. AdWords: Keyword Tool With Keyword Planner, we've combined the functionality of Keyword Tool and Traffic Estimator to make it easier to plan search campaigns. That's why Keyword Tool is no longer available. You can use Keyword Planner to find new keyword and ad group ideas, get performance estimates for them to find the bid and budget that are right for you, and then add them to your campaigns. Note

Batch Processing: 25 Tools and Techniques for Images and Documents Aug 16 2011 Converting images or files by hand can be a hugely time-consuming process. But how often do clients send us files in formats that can’t be directly used on their website or project? If you’re like most designers, your answer is probably “pretty often.”

Google Reader is a Web-based aggregator, capable of reading Atom and RSS feeds online or offline. by kvdheeraj Sep 27

Did you know that Google Reader has lots of useful keyboard shortcuts? Here is a list of them! by cupcakejenni May 12