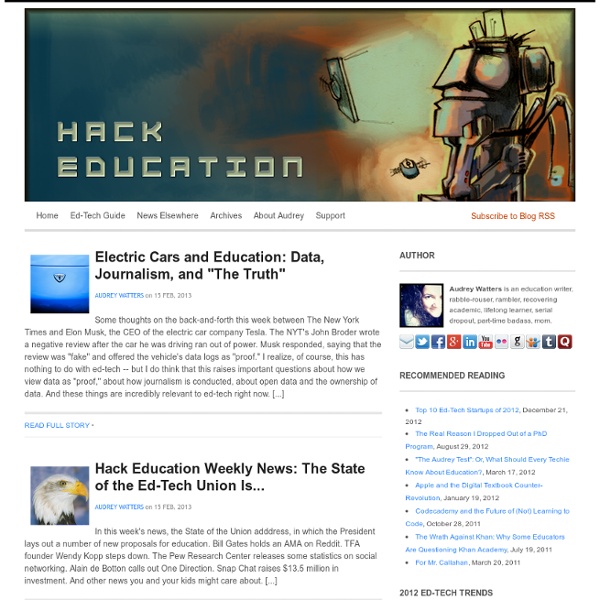 How Khan Academy Is Changing the Rules of Education | Magazine Matthew Carpenter, age 10, has completed 642 inverse trigonometry problems at KhanAcademy.org.Photo: Joe Pugliese “This,” says Matthew Carpenter, “is my favorite exercise.” I peer over his shoulder at his laptop screen to see the math problem the fifth grader is pondering. It’s an inverse trigonometric function: cos-1(1) = ? Carpenter, a serious-faced 10-year-old wearing a gray T-shirt and an impressive black digital watch, pauses for a second, fidgets, then clicks on “0 degrees.” Carpenter, who attends Santa Rita Elementary, a public school in Los Altos, California, shouldn’t be doing work anywhere near this advanced. But last November, Thordarson began using Khan Academy in her class. Initially, Thordarson thought Khan Academy would merely be a helpful supplement to her normal instruction. “I’m able to give specific, pinpointed help when needed,” she says. The result is that Thordarson’s students move at their own pace. Khan’s videos are anything but sophisticated. Not everyone agrees.

Q & A: Ask the Van - How to build a model atom. | Department of Physics | University of Illinois at Urbana-Champaign I need to make a 3 dimensional model of an atom. Can you help with some ideas of constructing this. Thanks- Troy ReynoldsJenkins Middle School, Palatka, Florida USA Troy - Cool project! The basic structure of an atom is that it has little things called neutrons and protons that are stuck together in a ball (called a nucleus) in the middle, with electrons in a bigger fuzzy ball around that. An interesting fact is that although the "cloud" of electrons that surround the nucleus is much much much bigger than the nucleus itself, most of the mass of the atom (more than 99%) is due to the nucleus. The number of protons that an atom has is called its atomic number. As for what to build your atom out of, be creative! -Tamara /(mods by mbw) (republished on 07/21/06) Follow-Up #1: models of atoms i am not sure how to do this project my teacher asked of the class. i am searching on the internet to find a step by step insructional paper on how to make a 3-D model of an atom. Mike W. LeeH OK, we disagree.

Khan Academy Is the Internet making us smart or stupid? Venkatesh Rao is an entrepreneur-in-residence in the Xerox Innovation Group and manager of the Trailmeme project. Nicholas Carr, a writer devoted to exploring the social and business implications of technology, came out with his latest book last month. It’s called The Shallows: What the Internet is Doing to Our Brains and is a book-length elaboration of his much-discussed 2008 Atlantic feature, “Is Google Making us Stupid?.” It’s a must-read for Web technologists — not because Carr’s so right, but because he’s so wrong. If you don’t have good answers to the questions Carr raises, you aren’t thinking hard enough about what you are doing. The book extends the modest and relatively defensible argument of the article into an ambitious and fatally-flawed one. Carr’s argument is roughly this: 1. When Carr’s article first appeared, I enthusiastically co-opted it into the pitch for Trailmeme, the beta project I manage at Xerox. Reading The Shallows had me going, “Whoa! I have a problem with this.

Stephen Downes: The Role of the Educator How often do we read about the importance of teachers in education? It must be every day, it seems. We are told about "strong empirical evidence that teachers are the most important school-based determinant of student achievement" again and again. The problem with the educational system, it is argued, is that teachers need to be held accountable. We are told we must fire incompetent teachers. Not just in the United States, but in the UK and elsewhere, the concern is that bad teachers must go. The problem with focusing on the role of the teacher, from my perspective, is that it misses the point. Let me tell you how I know this. Each of these has contributed in one way or another to an overall approach not only to learning online but to learning generally. It's an approach that emphasizes open learning and learner autonomy. Concordant with this approach has been the oft-repeated consensus that the role of the educator will change significantly. There's no end to such projects online.