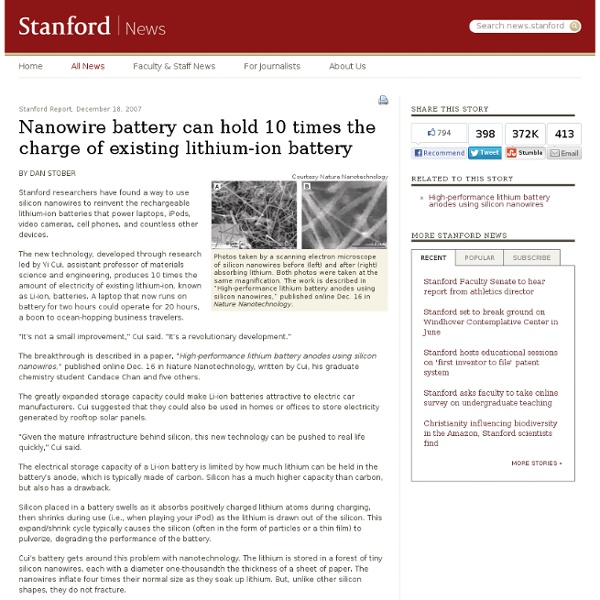 Stanford Report, December 18, 2007 Courtesy Nature Nanotechnology Photos taken by a scanning electron microscope of silicon nanowires before (left) and after (right) absorbing lithium. Both photos were taken at the same magnification. The work is described in “High-performance lithium battery anodes using silicon nanowires,” published online Dec. 16 in Nature Nanotechnology. Stanford researchers have found a way to use silicon nanowires to reinvent the rechargeable lithium-ion batteries that power laptops, iPods, video cameras, cell phones, and countless other devices. The new technology, developed through research led by Yi Cui, assistant professor of materials science and engineering, produces 10 times the amount of electricity of existing lithium-ion, known as Li-ion, batteries. "It's not a small improvement," Cui said. The greatly expanded storage capacity could make Li-ion batteries attractive to electric car manufacturers. Cui's battery gets around this problem with nanotechnology.

5 Bizarre Killing Sprees that Never Got Solved When you think about unsolved murder sprees, it’s usually cases like Jack the Ripper or The Zodiac Killer—the ones with movies and dozens of books about them. But they’re not the only ones. They’re not even the weirdest ones. Here are five bizarre killing sprees that never got solved… The Chicago Tylenol Murders In the fall of 1982, people with headaches and menstrual cramps all over Chicago were fucked if they reached for the Tylenol bottle. The same day (what timing!) Chicago police informed Johnson & Johnson, who immediately put on the skids and issued a mass recall of Tylenol throughout the area . Even with the recalls, though, it was too late for three other people who ingested the tainted pills. No one was ever caught and no motives ever uncovered, but one dumbass, a con-man/accountant (which is either the weirdest or best job combination we’ve ever heard of) by the name of James W. Bible John The 60s were a time of peace, free love and deranged killings in Glasgow, Scotland.

Artificial Intelligence Is Coming to the iPhone, And It's Going to Change Everything Let me start off by saying this: Your phone is not suddenly going to gain sentience and become Skynet. However, your phone is about to become a whole lot smarter, thanks to Apple and its new artificial intelligence Assistant. The hype surrounding Tuesday's Apple iPhone event is at an all-time high. The real star of Tuesday's show will not be the hardware, though. Assistant is the successor to Siri, the iPhone app that helped users with their daily tasks with natural language voice commands. The technology that powered Siri was born from SRI's CALO project, the largest artificial intelligence project in U.S. history. Two months after its launch, Apple acquired Siri for more than $200 million. What Assistant Will Do On Tuesday, Siri will be reborn as Assistant. Say you're in a new city and you're really craving Chinese. Instead of searching for the taxi company's number, Assistant will find it for you. The key though is that Assistant will learn. "This is real AI with real market use.

$1.6 million just bought the world’s most expensive dog. Big Splash, or “Hong Dong” in Chinese, is an 11-month-old Red Tibetan Mastiff. He already stands nearly three-feet-high at the shoulder and weighs more than 180lbs. He was recently purchased by an unidentified Chinese coal baron. Manchester United signs 5-year-old kid Charlie Jackson’s footwork was the thing that impressed Manchester United soccer scouts. Of course, his ball control had likely improved with his legs freshly freed from the diapers. Jackson was spotted by the powerhouse British side at age three, toying with his opponents in a community “Footytotz” program. There, the tousle-headed tot, already touted as a potential superstar, will play with kids at least a year older than him. But Jackson, who’s a fan of arch-rival Manchester City, had mixed feelings about the situation. “He was mortified that he was having to train with United,” his father Andy told the U.K.’s Daily Mail. “But he seems to be getting over that a bit now.” Jackon’s training with Manchester United’s junior squad hits even closer to the cradle than an arrangement made last summer by Real Madrid. Big-time European clubs have long recruited young players. The team’s superstar,Lionel Messi, was signed by the club at 13.

The world’s fastest supercomputer The world’s fastest supercomputer August 30th, 2011 allfromweb Twice a year, the world’s top 500 supercomputers are announced. Let’s take a closer look at the Jaguar, the fastest supercomputer in the world today. Quick data about the Jaguar * Performance: 1.759 petaflops (theoretical maximum: 2.33 petaflops) * Processors: 37,376 six-core AMD Opteron 2.6 GHz * Processor cores: 224,256 * Total RAM: 300 terabyte * Total disc space: 10 petabyte * System type: Cray XT5 * Operating system: Cray custom version of SUSE Linux One petaflops is the equivalent of one thousand trillion operations per second, which means the Jaguar is capable of a theoretical maximum performance of 2,330,000,000,000,000 operations per second. The computing power of the Jaguar is used by scientists to run simulations of climate changes and effects, supernovas, and a number of other compute-intensive applications. Source: here You can leave a response , or trackback from your own site.

Hulu up for sale, Google bidding big against Amazon, Yahoo, Dish Network September 07, 2011, 10:35 AM — How much is Hulu worth, now that they have over a million Hulu Plus subscribers? Reports range from $500 million to $2 billion. And anytime a company on the block gets in that high a price range, Google's name comes up. Does YouTube need a younger brother? After Comcast bought NBC, on original Hulu backer, things got a little wonky about Hulu's direction. Besides Google, other bidders chasing Hulu are Amazon, Dish Network, and Yahoo. Google and Hulu = greatness Google is the best thing that could happen to Hulu. Yes and if GOOG had that library they could offer a 'free' (with ads) equivalent of Netflix. Google buying Hulu makes the most sense! Google and Hulu = disaster Google will strangle hulu to death. Does anyone else see a future where google takes over the world.Kevin Peavler on allthingsd.com How would Google possibly integrate Hulu with YouTube? Not Google Amazon all the way. Yahoo is still in the bidding mix.

Half-male, half-female butterfly emerges from cocoon at museum exhibit The Sensational Butterflies exhibition at the London Natural History Museum is usually an opportunity for experts to wow museum-goers about colorful butterflies from around the world. But at this year's exhibition, one unusual great Mormon butterfly surprised even the experts. The butterfly is an extremely rare half-male, half-female bilateral Gynandromorph, which means that it appears to be male on one side but female on the other, according to the Guardian. Dual-sex animals are a rare occurrence in nature, but it's especially rare for such a creature to be so uniformly bilateral. "It's an amazing butterfly. Gynandromorphs form after sex chromosomes fail to properly separate during the division of a fertilized egg. "Pure bilateral Gynandromorphs are incredibly rare, and I have only ever come across three in my whole career of 30 years," said Brown. The butterfly has not shown any ill effects of its strange condition, and is flying well and feeding normally.

Video: New Atomic Clock Reaches A 100 Quadrillionth Of A Second Accuracy |... A team of researchers at the University of Tokyo has developed a new type of optical atomic clock that boasts a 100 quadrillionth of a second accuracy (one quadrillion has 15 zeros). The optical lattice clock is the brain child of Professor Katori who says his device observes a million atoms simultaneously whereas conventional atomic clocks measure time by using single atoms. The Professor explains: “(…) if one clock is placed one centimeter higher than another clock, the higher clock is affected by less gravity, so it goes faster. The idea is to eventually use the new clock to improve GPS (which is based on atomic clocks delivering 14-or 15-digit accuracy) or to predict earthquakes, for example. This video (shot by Diginfonews in Tokyo, in English) provides more insight:

Dead Bodies On Mount Everest: Pics, Videos, Links, News 02002-02029 (27 years): By 2029 no computer - or "machine intelligence" - will have passed the Turing Test. - Long Bets The Significance of the Turing Test. The implicit, and in my view brilliant, insight in Turing's eponymous test is the ability of written human language to represent human-level thinking. The basis of the Turing test is that if the human Turing test judge is competent, then an entity requires human-level intelligence in order to pass the test. The human judge is free to probe each candidate with regard to their understanding of basic human knowledge, current events, aspects of the candidate's personal history and experiences, as well as their subjective experiences, all expressed through written language. As humans jump from one concept and one domain to the next, it is possible to quickly touch upon all human knowledge, on all aspects of human, well, humanness. There are many contemporary examples of computers passing "narrow" forms of the Turing test, that is, demonstrating human-level intelligence in specific domains. Why I Think I Will Win.

Adobe Adds Flash Privacy Controls -- InformationWeekAdobe Adds Flash Privacy Controls - security Blog Flash Player and Google Chrome get patches against attacks currently seen in the wild. Recommended Reading: -- Adobe Flash Attacks Exploit Zero-Day Vulnerability -- Online Privacy Battles Advertising Profits Adobe is aiming to make Flash safer for users, in part by blocking questionable website-tracking practices. The company on Thursday released Flash Player version 10.3, which now enables users to wipe the data stored by Flash from within the browser. The new plug-in-wiping feature is facilitated by an API known as NPAPI:ClearSiteData. Any browser plug-in can use the new API, though Flash is the first to do so. The use of persistent Flash cookies, however, may be waning. The updated Flash Player also patches multiple critical vulnerabilities present in Flash Player 10.2 for Windows, Macintosh, Linux, Solaris, and Android. Related attacks utilizing Microsoft Word and Excel files with a malicious Flash (.swf) file embedded in them have been seen in the wild, targeting Windows.