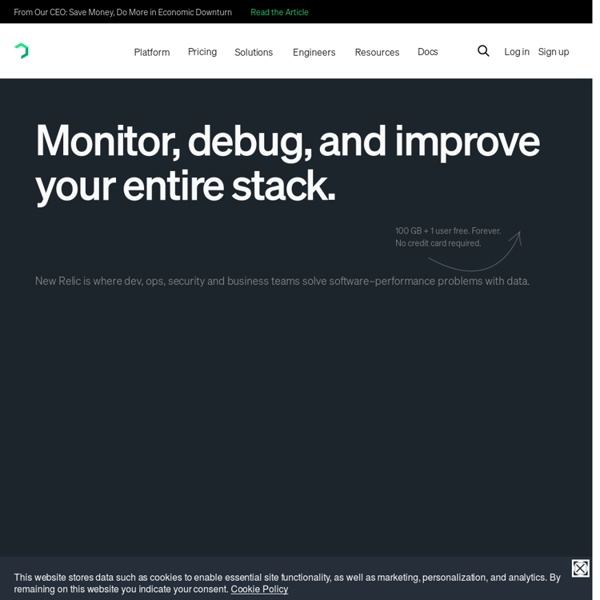 avc.com EngagementNew / ReturningTraffic Sources Concurrent Visits Number of people on your entire site right now. You'll see this updating constantly as your visitors come and go. Features : Reinvigorate We’ve cut the clutter you find in other analytics applications and packed Reinvigorate with the features you need to gain the advantage in today’s real-time web. +Real-time, Active TrackingSee site activity as it happens on your live auto-updating dashboard. Gone are the days of waiting hours or even days for your stats! +The Hottest HeatmapsNot getting the clicks you want? Evaluate your interfaces with the ‘hottest’ heatmaps in the business and say goodbye to dead spots for good.

Pssst... your Rails application has a secret to tell you What would you say if I told you that you could get more precise, actionable, and useful information about how your Rails application is performing than any third party service or log parsing tool with just a few hours of work? For years, we’ve used third party tools like New Relic in all of our apps, and while we still use some of those tools today, we found ourselves wanting more – more information about the distribution of timing, more control over what’s being measured, a more intuitive user interface, and more real-time access to data when something’s going wrong. Fortunately, there are simple, minimally-invasive options that are available virtually for “free” in Rails.

Pricing Urban Airship’s platform is built for business—we help the world’s largest and most mobile-savvy brands connect to customers at any scale and with a full-featured platform that includes push notifications and in-app messaging. Communicate with millions of users with confidence to engage users, convert buyers, and build loyalty. Our platform also supports the most sophisticated use cases through optional add-ons such as location-based messaging and location history.

7 A/B Testing Resources for Startups and Solo Developers This post originally appeared on Dyn.com, a world leader in managed DNS, powering the best brands on the web including Gowalla, Mashable, Twitter, Wikia and more. Follow @DynInc on Twitter. If you need a simple, inexpensive way to figure out what's going to make your website's users click on that big, red button, you've come to the right place. A/B testing is one of the easiest ways to figure out whether one specific variable of your website is working. It could be a button color, a bit of web copy, an image — something extremely finite that may (or may not) have a measurable impact on desired actions, be they conversions or a simple click-through.

Ruby on Rails Tutorial: Learn Rails by Example book and screencasts by Michael Hartl Michael Hartl Contents Foreword My former company (CD Baby) was one of the first to loudly switch to Ruby on Rails, and then even more loudly switch back to PHP (Google me to read about the drama). 3D Tutorial — CoreS2 Software Solutions This tutorial is meant as an introduction to programming 3D computer graphics. You will learn how to program a 3D rasterizer (one of many different approaches to implementing 3D computer graphics): this isn't about programming a game or using the latest HTML5 features. It is, however, meant as a way to introduce you to how 3D computer graphics work "under the hood". Localytics Adds Features To Complete The Picture For Mobile App Developers And Marketers Boston-based Localytics is fleshing out its mobile app analytics and marketing platform in a major way today with a variety of new features to help not just with customer acquisition, but also with monitoring and maintaining customer relationships over the lifetime of an app. The three big new areas Localytics now addresses with its platform are Lifetime Value Tracking, Customer Acquisition Management and Real-Time Funnel Management, all of which serve to help determine long-term engagement value. Localytics is introducing these new features based on the theory that most marketers spend all their time and money on the front end of the sales cycle, getting people to download the app, and then aren’t really concerned about whether that person will become a quality user over the long term. This isn’t just good for companies, Localytics argues, but ultimately benefits the consumer, too, since it enables developers to create a better app experience that’s more likely to meet a user’s needs.

Scheduler background cron Table of Contents Scheduler is an add-on for running jobs on your app at scheduled time intervals, much like cron in a traditional server environment. Scheduler is a "best effort" service, meaning that execution is expected but not guaranteed. Scheduler is known to occasionally (but rarely) miss the execution of scheduled jobs. If scheduled jobs are a critical component of your application, it is recommended to run a custom clock process instead for more reliability, control, and visibility. Quizible : The Integration of Drupal and the iPhone The web game Quizible originated from the popular Microsoft Excel spreadsheet picture based games from the late 90's. The Drupal powered site was developed as part of an in-house training month at Ixis. The mobile project came about as we looked for a new way to utilise the data Quizible had collected.

App Infrastructure Startup Buddy.com Gets Into The Analytics Business Buddy.com today announced a mobile analytics service that’s supposed to give publishers and brands a better sense of who’s actually using their apps and how they’re using them. There’s plenty of competition on this front — Andreessen Horowitz-backed Mixpanel, for example, has increasingly become a mobile analytics company, and it makes a big deal out of not focusing on “bullshit metrics” like downloads. Buddy CEO and co-founder David McLauchlan was similarly dismissive of using downloads as a meaningful way to measure app engagement. “That’s analogous to figuring out TV ratings by looking at how many TVs they sell in Best Buy,” he said.