How to Control Multiple Computers with a Single Keyboard and Mouse 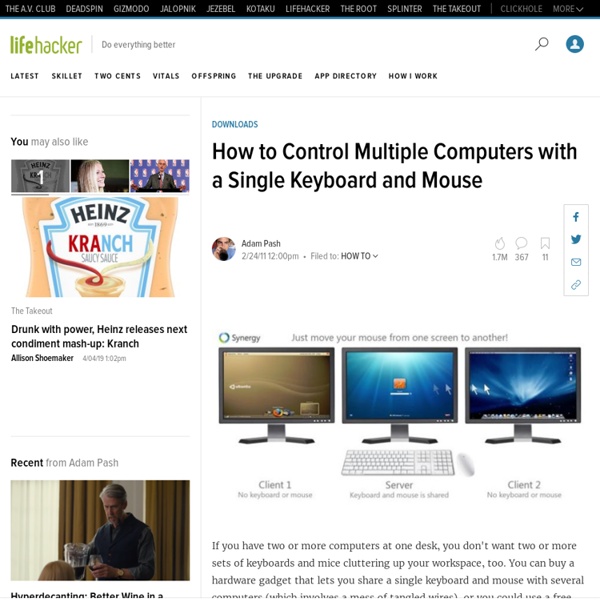 Cheap USB Simultaneous Multitrack Recording want to record simultaneous tracks without an expensive pa system or beastly sound card? i did. i'll show you how with some cheap usb soundcards. i got tired of having to record one track and then another and then another when i could really do it all in one take, with much better results. i had a couple computers sitting around in various states of disrepair, so i gutted the sound card from one and put it in another. then using my recording software (cool edit pro at the time) i mapped the soundcards to different tracks and viola, it worked. i hit up ebay and found some usb soundcards for about $3 each and bought about 8 of them. using a usb hub, i plugged in 4 of them and attached a couple of different things and i was surprised when it worked much better than i anticipated.

Observatory 08Apr 14 Apple’s little advertising crisis Phil – and his email – get their day in court Corporate legal dramas often serve as a reminder to one of the new cardinal rules of business: Watch what you say in email. I suspect there are a few people at Apple and its ad agency TBWA\Chiat\Day who wish they could take their messages back, now that Samsung’s lawyers have introduced them as evidence. One email from Phil Schiller to Tim Cook says that Apple “may need to start a search for a new agency … we are not getting what we need from [Chiat] and haven’t been for a while.” Tim’s reply: “If we need to do this, we should get going.” Yikes. This all happened in 2013, so who knows if it’s blown over by now. A little perspective is in order. 21Mar 14 One of Steve Jobs’ greatest talents: caring Before iPhone, there was another tool Steve Jobs used to great effect. It’s always fun to read stories about people’s chance encounters with Steve Jobs. Okay, it does sound a bit suspicious. 14Mar 14 Not a thing. Humor?

Deadly Computer Blog itechfuture.com 2dayBlog - Technology Journal, New Gadget Everyday! Robot The branch of technology that deals with the design, construction, operation, and application of robots,[2] as well as computer systems for their control, sensory feedback, and information processing is robotics. These technologies deal with automated machines that can take the place of humans in dangerous environments or manufacturing processes, or resemble humans in appearance, behavior, and/or cognition. Many of today's robots are inspired by nature contributing to the field of bio-inspired robotics. Robots have replaced humans[4] in the assistance of performing those repetitive and dangerous tasks which humans prefer not to do, or are unable to do due to size limitations, or even those such as in outer space or at the bottom of the sea where humans could not survive the extreme environments. There are concerns about the increasing use of robots and their role in society. Summary KITT (a fictitious robot) is mentally anthropomorphic ASIMO is physically anthropomorphic History

Do-It-Yourself Wireless Antennas Update and Resource Center Looking for an affordable way to increase the range of your wireless network? Trying to reach dead spots inside or outside a home, sharing a signal with your neighbors, or maybe for a point-to-point link with another network? Are you suffering from weak cell phone (photo) reception? We discuss the Pringles Cantenna, Coffee Can Antenna, Parabolic Reflector and Antenna Designs. One Laptop per Child A short video covering OLPC's main mission principles One Laptop per Child (OLPC) is a project supported by the Miami-based One Laptop per Child Association (OLPCA) and the Cambridge-based OLPC Foundation (OLPCF), two U.S. non-profit organizations set up to oversee the creation of affordable educational devices for use in the developing world. The project was originally funded by member organizations such as AMD, Chi Mei, eBay, Google, Marvell Technology Group, News Corporation, Nortel, Red Hat, and Quanta. In the first years of the project, the Association managed development and logistics, and the Foundation managed fundraising such as the Give One Get One campaign ("G1G1"). In 2010 the Association set up a new office in Miami under Rodrigo Halaby, and currently oversees deployment and support for the XO-1.5 laptop and its successors, and country partnerships. FAQ on official site of OLPC[2] informs that as of 2011 there were about over 2.4 million XO laptops delivered.[3] History[edit]