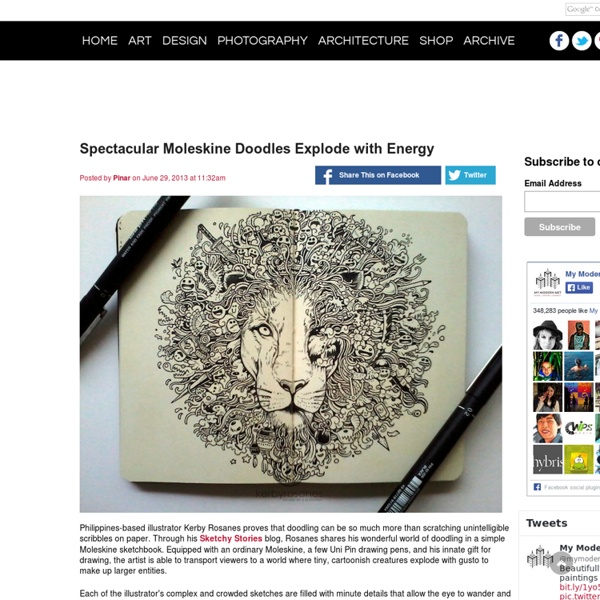 Philippines-based illustrator Kerby Rosanes proves that doodling can be so much more than scratching unintelligible scribbles on paper. Through his Sketchy Stories blog, Rosanes shares his wonderful world of doodling in a simple Moleskine sketchbook. Equipped with an ordinary Moleskine, a few Uni Pin drawing pens, and his innate gift for drawing, the artist is able to transport viewers to a world where tiny, cartoonish creatures explode with gusto to make up larger entities. Each of the illustrator's complex and crowded sketches are filled with minute details that allow the eye to wander and discover new characters and designs at every turn. The portraits are immediately mesmerizing, but even more spectacular when looked upon closely. Rosanes says that he's on a bit of an illustration high from merging animals with his "crazy doodle monsters" but admits, "I’m liking the results of every fusion." Kerby Rosanes websiteKerby Rosanes on deviantART via [Gaks]

Sewing on your journal pages by aisling d'art ©2007 You can use any page in a book like fabric (to sew on, for example) by using iron-on interfacing on the back side of the page. Yes, just iron it on, the same as you would iron interfacing onto fabric. It won't always stick 100%, but it will work well enough that you can sew through it. Alex Russell Flint Madeline von Foerster by okmarzo April 21, 2014 "Executed in the oil and egg tempera mische technique developed by the Flemish Masters, these paintings allude to Renaissance sources in both method and style. A strong influence from the School of Fontainebleau loans an aura of mystery and otherworldliness to the artworks. The paintings often resemble Wunderkammern – Enlightenment era “cabinets of curiosities,” where the wonders of nature were collected and displayed.

Best Movies of 2013 May we stipulate that 2013 has been a flat-out, stone-cold, hands-down spectacular year in movies? Which means that many of us are frustrated. After all, the average filmgoer only sees about six films a year. This is being written at a time when there are at least 10 must-see movies in area theaters, not to mention titles that are stacking up in our on-demand queues like backed-up shuttle flights circling Reagan National. And guess what: There are more on the way. Even with names like Soderbergh, Spielberg and Lucas decrying the current state of cinema in recent months, it’s still easy to choose 10 movies of exceptional ambition, vision and artistic sensitivity – so easy that we decided to expand the list to a lucky 21.

18-Year-Old Creates Surreal Artworks to Express Emotions Growing up can be a challenge, especially in the teenage years. Some people use writing or art as a creative outlet for all the emotions they keep inside. Sebastian Eriksson is an 18-year-old up-and-coming surrealist artist living in Sweden. Not only is his artwork amazing, it's extremely thought-provoking as he adds descriptions of how his pieces relate to his life. For instance, in the piece above, he states: "This is another paradox that I've been working on for a couple of days.

Wax paper and art journals by aisling d'art ©2006 I use wax paper to separate damp art journal pages so that they don't stick together. Wax paper is inexpensive, very slightly porous (so the pages dry underneath), and easy to use. The Awakening A time comes in your life when you finally get…when, in the midst of all your fears and insanity, you stop dead in your tracks and somewhere the voice inside your head cries out…ENOUGH1 Enough fighting and crying and blaming and struggling to hold on. Then, like a child quieting down after a tantrum, you blink back your tears and begin to look at the world through new eyes. This is your awakening. You realize it’s time to stop hoping and waiting for something to change, or for happiness, safety and security to magically appear over the next horizon. You realize that in the real world there aren’t always fairy tale endings, and that any guarantee of “happily ever after” must begin with you…and in the process a sense of serenity is born of acceptance.

A free school under a bridge in India Altaf Qadri / AP Founder of a free school for slum children Rajesh Kumar Sharma, second from right, and Laxmi Chandra, right, write on black boards, painted on a building wall, at a free school run under a metro bridge in New Delhi, India. At least 30 children living in the nearby slums have been receiving free education from this school for the last three years. My collection of funny emails from my inbox. Subject: 5 MINUTE MANAGEMENT COURSE Lesson 1: A man is getting into the shower just as his wife is finishing up her shower, when the doorbell rings. The wife quickly wraps herself in a towel and runs downstairs. When she opens the door, there stands Bob, the next-door neighbor. 40 Of The Most Powerful Photographs Ever Taken Sisters pose for the same photo three separate times, years apart. A Russian war veteran kneels beside the tank he spent the war in, now a monument. A Romanian child hands a heart-shaped balloon to riot police during protests against austerity measures in Bucharest. Retired Philadelphia Police Captain Ray Lewis is arrested for participating in the Occupy Wall Street protests in 2011.