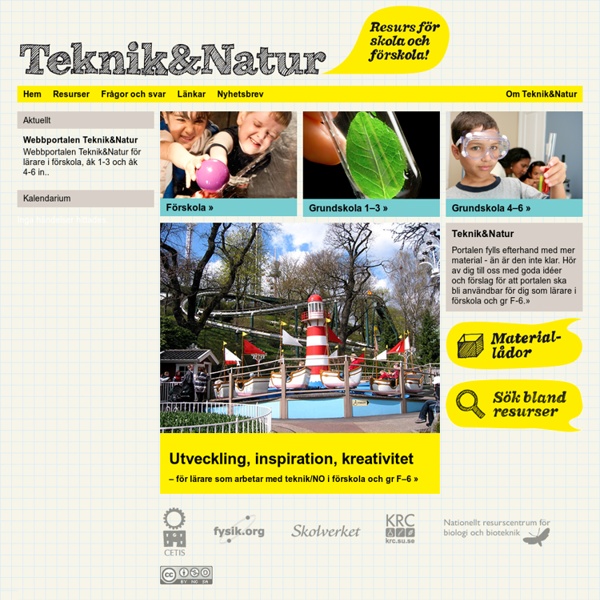 20+ Home Science Projects for Kids 52.6k Shares Here are 20+ awesome and FUN Home Science Projects for Kids! These have ALL been tried and tested by ourselves and our kids – we hope you will enjoy them all as much as we have! Learn How Plants Absorb Water – a FUN way for kids to witness how plants absorb water and nutrients!DIY Lava Lamp Experiment – this was so much bubbly FUN!Make your own Magic Aqua Sand! Experience Just How Big the Universe is, in One Mind-Blowing Interactive You need a more recent version of Adobe Flash Player. Recently, NASA scientists combined data from the Spitzer and Hubble Space Telescopes to discover the most distant galaxy known to date. The galaxy, named Abell2744 Y1, was formed around 13.2 billion years ago when the universe was extremely young. 5 Free Digital Tools for the No Budget Classroom Something has changed in education content delivery, thanks to companies like Google, Khan Academy, MIT. When these industry leaders (and others) started offering high-quality educational tools for free, more followed. Yesterday’s muffled plea for equality in educational opportunities regardless of economic status is today’s reality. A rising tide raises all ships became a call for action rather than a dreamy quote. This isn’t your mother’s schoolhouse anymore.

These 20 powerful photos of kids’ bedrooms will change the way you look at th... Like us on FB: Where Children Sleep is a powerful photo series by English photographer James Mollison. He traveled around the world capturing the differences between the lifestyle of kids from different countries. The discrepancy is quite shocking, as in the series you will find photos of children like Kaya from Tokyo, whose mother spends more than $1.000 a month on her dresses, as well as photos of kids from Brazil or Nepal that barely have a roof over their heads. Save the Children Italy supported the two year long process needed to complete this series that now is also available as a book, where each portrait and bedroom photos are accompanied by an extended caption that tells the story of each child.

Food Chain Stacking Cups Sunday, October 28, 2012 Food Chain Stacking Cups Awesome idea from Earth Mama's World: Food Chain game out of styrofoam cups! Just glue images on to your cups and write the name of the organism on the rim. Ice Tray Battery - Kids' Science Wrap a nail with a piece of copper wire, leaving a section of wire extending from below the head of the nail. Repeat Step 1 with the remaining 4 nails and 4 pieces of copper wire. Fill 6 wells of an ice tray with distilled white vinegar. Create a circuit by inserting each nail into a well of vinegar while placing the extended wire into the next well. Place one “leg” of an LED light into the well with only a copper wire inside it and place the other LED “leg” into the well with only a nail in it.

Exploring Nature Educational Resource indicates a section of the site that is available to subscribing members only. Not a member? Feel free to click on these links and view the samples we have made available. Then check out the low cost and great benefits to subscribers! Apps That Rise to the Top: Tested and Approved By Teachers Michelle Luhtala/Edshelf With the thousands of educational apps vying for the attention of busy teachers, it can be hard to sift for the gold. Michelle Luhtala, a savvy librarian from New Canaan High School in Connecticut has crowd-sourced the best, most extensive list of apps voted on by educators around the country. “I wanted to make sure we had some flexibility because there’s no one app that’s better than all the others,” Luhtala said. THE PLANETS OF THE SOLAR SYSTEM FLIPBOOK by TeachToTell THE PLANETS OF THE SOLAR SYSTEM Your students will have as much fun as mine did in assembling this flipbook featuring the nine planets of the solar system. WHAT'S INCLUDED: * Flipbook templates in blackline to print. * Flipbook templates in color to print. * Solar System Vocabulary Cards HOW TO ASSEMBLE: You can choose either of the three options. A.

2,000 Ping-Pong Balls And Mouse Traps Create An Extreme Chain Reaction In New Pepsi Ad Pepsi is using a stunning chain reaction involving 2,014 mousetraps and 2,015 ping-pong balls to mark the arrival of a new year with the end result captured in a single take lasting just 15 seconds in real time. The idea for the online film, for Pepsi Max, was inspired by generations of science teachers’ use of mouse traps to demonstrate the basics of nuclear fission. The impact was heightened by staging the stunt within a mirrored tunnel. The mouse traps took almost five hours to set up leaving the 42-strong production team little leeway if things went wrong. The ad, created by AMV BBDO, was directed by Julian Harriman-Dickinson through London-based art directors and filmmakers HarrimanSteel. Designer was Doug Stewart and production designer/art director Will Field.

Biology Archives - Science Sparks Playing Detective – add some science to role play This post is all about adding a bit of science sparkle to role play, the activities should hopefully add a simulating and educational twist to an already fun game. My little boy is usually a bit reluctant to play role play games, but generally if I add in a task or some props he is much more enthusiastic. Here are just a few of our favourite ideas. Make a disguise/camouflage Where are you playing?