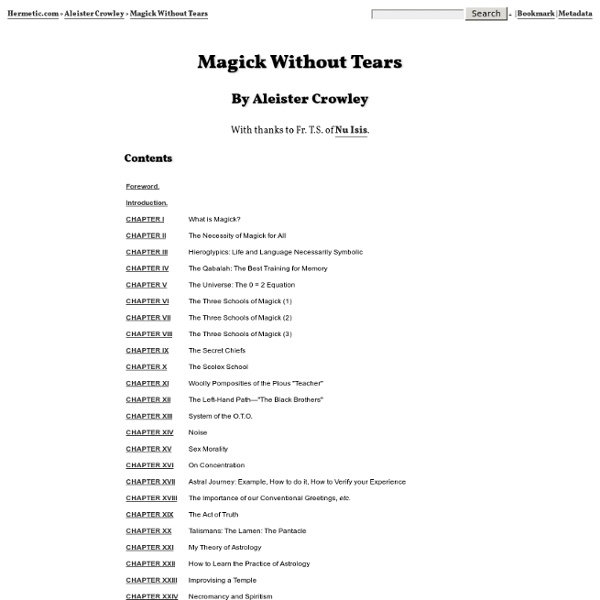 Table of Contents Note: This hypertext edition of Magick Without Tears is based on a plaintext edition entered in 1988 by Bill Heidrick from the 1954 first edition, with a foreword by the original editor Karl J. Germer. Footnotes indicated by *, †, ‡, etc. by either Crowley or Germer. In the interests of readability, when converting the plaintext to HTML I made no attempt to retain the line breaks and pagination from the paper edition. Magic without Tears November 13, 1988 e.v. key entry and first proof by Bill Heidrick T.G. Key entry by Bill Heidrick, (415) 454-5176 P.O. Aleister Crowley MAGICK WITHOUT TEARS Complete and Unabridged, edited with a Foreword by Karl J. HTML coding by Frater T.S. for Nu Isis Working Group. Additional work and design by John Griogair Bell of The Hermetic Library at Hermetic.com with additional proofing by Pralixus Magick Without Tears

LEMEGETON, Part 1;2: Goetia The 9th spirit in order is Paimon; a great king, & very Obedient to Lucifer, he appeareth in ye forme of a man, sitting one a dromedary, wh a Crowne most glorious on his head. Three [There] goeth before him a host of spirits like men with Trumpets and well sounding Cymballs, and all other sorts of musicall Instruments &c. he hath a great voice, and roareth at his first comming, and his speech [voice] is such as ye Magician cannot well understand, unless he compelleth him. [102r] The 10th spirit is Buer, a great president and appereth in that is his shape when ye is there, he teacheth Phylosophy [both] Morall & Naturall, & ye Logicall arts, & ye vertues of all hearbes & plants, & healeth all distempers in Man, & giveth (familiars) good familiars, he governeth over 50 Legions of spirits and this is his seale of obediance wch you must weare when you call him to apperance. The 12th spirit is Sitri, he is a great prince & appeareth at first with a Leopards face, and wings as a griffin. [103r]

Moonchild (Liber 81 - The Butterfly Net) This book was written in 1917, during such leisure as my efforts to bring America into the War on our side allowed me. Hence my illusions on the subject, and the sad showing of Simon Iff at the end. Need I add that, as the book itself demonstrates beyond all doubt, all persons and incidents are purely the figment of a disordered imagination? London, 1929. Copyright © Ordo Templi OrientisTranscribed & 1st Proofread, 4/14/98 e.v. by Fr. Ra-Hoor-Hd III°/Camp Master of Xanadu O.T.O. Additional work and design by John Griogair Bell of The Hermetic Library at Hermetic.com { } denotes footnotes and/or marginalia. [ ] denotes page numbers Except for notations added to the history of modification, the text in this file down to the next row of asterisks must accompany all copies made of this file.

The Book of THOTH - The complete guide to the Tarot, Magick and the Occult Foucault's Pendulum This article is about the novel by Italian philosopher Umberto Eco. For the physics experiment and implement, see Foucault pendulum. Foucault's Pendulum (original title: Il pendolo di Foucault) is a novel by Italian writer and philosopher Umberto Eco. It was first published in 1988, and an English translation by William Weaver appeared a year later. Foucault's Pendulum is divided into ten segments represented by the ten Sefiroth. The novel is full of esoteric references to Kabbalah, alchemy and conspiracy theory — so many that critic and novelist Anthony Burgess suggested that it needed an index.[1] The pendulum of the title refers to an actual pendulum designed by the French physicist Léon Foucault to demonstrate the rotation of the earth, and has symbolic significance within the novel. Plot summary[edit] After reading too many manuscripts about occult conspiracy theories, three vanity publisher employees (Belbo, Diotallevi and Casaubon) invent their own conspiracy for fun. Mr. Mr.

Book of Lies Sacred texts Thelema Aleister Crowley After an unsuccessful attempt to climb Kanchenjunga and a visit to India and China, Crowley returned to Britain, where he attracted attention as a prolific author of poetry, novels, and occult literature. In 1907, he and George Cecil Jones co-founded a Thelemite order, the A∴A∴, through which they propagated the religion. After spending time in Algeria, in 1912 he was initiated into another esoteric order, the German-based Ordo Templi Orientis (OTO), rising to become the leader of its British branch, which he reformulated in accordance with his Thelemite beliefs. Through the OTO, Thelemite groups were established in Britain, Australia, and North America. He spent the First World War in the United States, where he took up painting and campaigned for the German war effort against Britain, later revealing that he had infiltrated the pro-German movement at the behest of the British intelligence services. Early life[edit] Youth: 1875–94[edit] Cambridge University: 1895–98[edit] Had! [edit]

Brain, Mind, and Altered States of Consciousness The conspiracy to reduce consciousness to intellectual awareness of the physical world has been in evidence for at least five thousand years. Over the centuries the mental and psychic powers that only mystics and seers now possess have been filtered out of most people. So we now assume that our narrow, tightly-bound consciousness is normal and natural. "Ordinary consciousness" is "normal" only in the strict sense of "statistically most frequent," not inherently "good" or "natural" as the term is sometimes misconstrued to mean. When contrasted with supernormal consciousness experienced by certain people in specific instances, our current rigid, intellect-based awareness is highly abnormal and unnatural. Reports of Supernormal Consciousness "The boundary between my physical self and my surroundings seemed to dissolve and my feeling of separation vanished. . . . The Conspiracy to Debase Human Consciousness The Human Brain and Mind Brain Stimulation and Neurofeedback

John M. Allegro John Allegro John Marco Allegro (17 February 1923, Balham, South London[1] – 17 February 1988, Sandbach, Cheshire[2]) was an English archaeologist and Dead Sea Scrolls scholar. He was known as a popularizer of the Dead Sea Scrolls through his books and radio broadcasts. He was the editor of some of the most famous and controversial scrolls published, the pesharim. A number of Allegro's later books, including The Sacred Mushroom and the Cross, brought him both popular fame and notoriety. Training[edit] Allegro matriculated from Grammar school in 1939, though did not go on to university, as his father saw little value in higher education, so Allegro joined the British Navy, serving during World War Two and going on to become an officer. The Copper Scroll[edit] It was on Allegro's recommendation in 1955 that the Copper Scroll was sent by the Jordanian government to Manchester University in order for it to be cut into sections, allowing the text to be read. Publishing the Pesharim[edit] J.M.

Pineal secrets - Pineal gland, the land of god. Pineal Secrets: Pineal gland is the true master gland. It is situated between the eyes. It is the organ of clairvoyance, Third eye, the eye of Ra or Heru (God). Biblical Jacob saw God face to face on the island of Pe-ni-el. The pineal gland, the most enigmatic of endocrine organs, has long been of interest to anatomists. The pineal organ is small, weighing little more than 0.1 gram. The pineal gland contains a number of peptides, including GnRH, TRH, and vasotocin, along with a number of important neurotransmitters such as somatostatin, norepinephrine, serotonin, and histamine. Melotonin is the only hormone secreted by the pineal gland. Melatonin was previously known to cause the skins of amphibians to blanch, but its functions in mammals remained uncertain until research discoveries in the 1970s and '80s suggested that it regulates both sleeping cycles and the hormonal changes that usher in sexual maturity during adolescence.

The Transmigration of Timothy Archer The Transmigration of Timothy Archer is a 1982 novel by Philip K. Dick. As his final work, the book was published shortly after his death in March 1982 following a series of strokes, although it was written the previous year. The book was originally titled Bishop Timothy Archer. The novel was nominated for the Nebula Award for Best Novel in 1982.[1] Plot introduction[edit] Set in the late 1960s and 1970s, the story describes the efforts of Episcopal Bishop Timothy Archer, who must cope with the theological and philosophical implications of the newly discovered Gnostic Zadokite scroll fragments. On the houseboat, Angel is reunited with Bill, Kirsten's son who has schizophrenia. Transmigration is one of Dick's most overtly philosophical and intellectual works. Characters[edit] Angel Archer: narrator, manager of a Berkeley record store, widow of Jeff ArcherTimothy Archer: Bishop of California, father of the late Jeff Archer and father-in-law of Angel. Other works[edit] Criticism[edit]

Allen Ginsberg’s Hand-Annotated Photos of the Beat Generation Disappointed by the On the Road movie? Don’t worry, you’re not alone. Luckily, NYU’s Grey Art Gallery is offering a far superior option for those in search of an inside glimpse at how the Beat Generation lived. Beginning January 15, New Yorkers can visit the gallery’s Beat Memories: The Photographs of Allen Ginsberg to peruse a selection of 110 photos taken (and often captioned by hand) by none other than Allen Ginsberg. From a shot of Jack Kerouac’s muse, Neal Cassady, and “his love of the year” snuggling under a cinema marquee advertising a Brando triple feature to a solemn photo of William S.

Red Book (Jung) The Red Book, also known as Liber Novus (Latin for New Book), is a 205-page manuscript written and illustrated by Swiss psychiatrist Carl Gustav Jung between approximately 1914 and 1930, prepared for publication by The Philemon Foundation and published by W. W. Norton & Co. on October 7, 2009. Until 2001, his heirs denied scholars access to the book, which he began after a falling-out with Sigmund Freud in 1913. Jung originally titled the manuscript Liber Novus (literally meaning A New Book in Latin), but it was informally known and published as The Red Book. Jung was associated with Freud for a period of approximately five years, beginning in 1907. Jung referred to the episode as a kind of experiment, a voluntary confrontation with the unconscious.[3] Biographer Barbara Hannah, who was close to Jung later in his life, compared Jung's experiences to the encounter of Menelaus with Proteus in the Odyssey. The work is inscribed by Jung with the title Liber Novus (The New Book).

www.webofmimicry.com/museum/bookreview-viewer.php?review=corbin Ok friends, in this library, if you want to get anywhere, this is a good starting point. By way of introduction into our worldview from the Ivory Tower, we feel obliged to state the following as a primer and introduction. The main difficulties of opinion anyone has with 'religion' in general at this point are to be counted as merits of good instinct. Anyone who shows an unwillingness to be shystered under a certain God-concept is just being relatively cautious and smart. In any case, by comparison, the stuff here should not ruffle even a single feather from here to the farthest horizon of the earth traversed by Men of Reason. The two articles in this book will introduce you to some fundamental concepts that we strongly feel are pre-requisites to mobilize oneself in a certain, nearly lost dimension of human experience. Everyone's heard that the world is an illusion before; it's a pretty easily digestible bit of doctrine intellectually. Anyways...