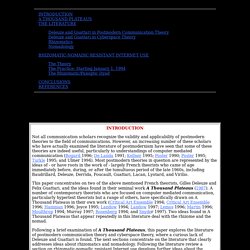 However, an increasing number of these scholars who have actually examined the literature of postmodernism have seen that some of these theories are indeed useful, particularly to understandings of computer mediated communication (Bogard 1996; De Landa 1991; Kellner 1995; Poster 1990; Poster 1995; Turkle 1995; and Ulmer 1994). Any-Space-Whatever. Borromini’s Bricks: Matters of Immanence in the Roman Oratory And if you think of Brick, for instance, and you say to Brick, “What do you want Brick?” 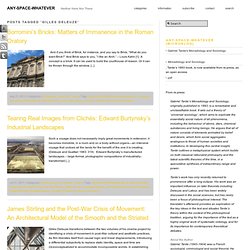 And Brick says to you, “I like an Arch.” – Louis Kahn [1] A concept is a brick. It can be used to build the courthouse of reason. Or it can be thrown through the window. [...] Tearing Real Images from Clichés: Edward Burtynsky’s Industrial Landscapes Such a voyage does not necessarily imply great movements in extension; it becomes immobile, in a room and on a body without organs—an intensive voyage that undoes all the lands for the benefit of the one it is creating. What Is Philosophy?, by Erik Davis. Michel Foucault's blurb is stamped on the back of What is Philosophy? 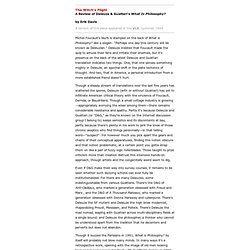 Like a slogan: "Perhaps one day this century will be known as Deleuzian. " Deleuze insisted that Foucault made the quip to amuse their fans and irritate their enemies, but it's presence on the back of the latest Deleuze and Guattari translation indicates two things: One, that one senses something mighty in Deleuze, an epochal shift in the plate tectonics of thought. And two, that in America, a personal introduction from a more established friend doesn't hurt. Though a steady stream of translations over the last five years has scattered the spores, Deleuze (with or without Guattari) has yet to infiltrate American critical theory with the virulence of Foucault, Derrida, or Baudrillard. Though a small cottage industry is growing—appropriately worrying the wiser among them—there remains considerable resistance and apathy. Gilles Deleuze - Encyclopedia Nomadica.

Deleuze wrote many influential works on philosophy, literature, science, film, politics and art, some being the product of his 23 year-long close collaboration with Felix Guattari, with whom he wrote, most notably, "The Anti-Oedipus" and "A Thousand Plateaus", both subtitled "Capitalism and Schizophrenia". Early Life and Studies Deleuze was born in the 17th arrondissement of Paris where he resided for most his life. His father was an engineer and a veteran of the First World War. In a 1988-1989 interview with Claire Parnet, Deleuze described his family as uncultivated bourgeois family "de droite". Early Work Empiricism and Nietzsche's System. Deleuze-dictionary.pdf (application/pdf Object) Deleuzenotes. There are creators in politics, and creative movements, that are poised for a moment in history. 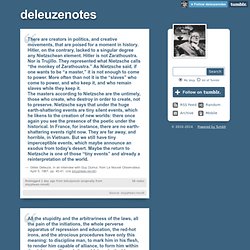 Hitler, on the contrary, lacked to a singular degree any Nietzschean element. Hitler is not Zarathoustra. Nor is Trujillo. They represented what Nietzsche calls “the monkey of Zarathoustra.” As Nietzsche said, if one wants to be “a master,” it is not enough to come to power. All the stupidity and the arbitrariness of the laws, all the pain of the initiations, the whole perverse apparatus of repression and education, the red-hot irons, and the atrocious procedures have only this meaning: to discipline man, to mark him in his flesh, to render him capable of alliance, to form him within the debtor-creditor relation, which on both sides turns out to be a matter of memory - a memory straining toward the future arkitekcher: It’s really good not having any view or idea about this or that point.

Ahmetasabanci: Deleuze & Meinong: The Prejudice in Favor of the Actual « Stellar Cartographies. In 1999, after the Social Text farce, Alan Sokal, along with fellow physicist Jean Bricmont, skewered the contemporary French philosophic community by impugning their use of mathematics and science in their theoretical work. 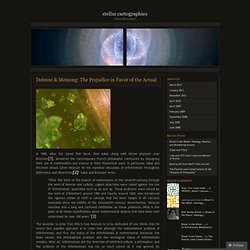 Deleuze and Guattari avec Lacan. In what sense can Guattari’s thought be understood as a radicalization of Lacanian psychoanalysis? 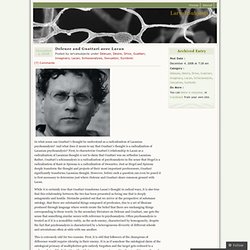 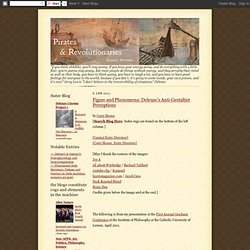 Index-tags are found on the bottom of the left column.] [Central Entry Directory] [Corry Shores, Entry Directory] [May I thank the sources of the images: Joy A all about Weybridge / Rachael Talibart youtube clip / Komond layersmagazine.com / Jacob Cass Dark Roasted Blend Brain Den Credits given below the image and at the end.] Deleuze.