Rise in witchcraft cases should remind us to treat children's services with respect. Reports of child abuse related to accusations of witchcraft are on the rise in London, with 27 allegations made to the Metropolitan Police in the past year and 148 cases since 2004. 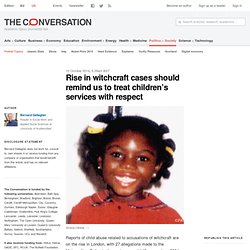 Yet the people charged with preventing these cases from happening are working with increasingly scarce resources. There have been concerns for a number of years about child abuse linked to witchcraft. These cases typically involve children being physically assaulted, often very seriously and sometimes fatally, in the belief that this will rid them of evil spirits. Boys and girls of all ages, can be subject to abuse of this kind – frequently perpetrated by their parents or carers. Sometimes, they are helped by people from outside the family, such as religious figures.

Wave-of-sexual-abuse-allegations-for-private-boys-schools-in-britain. LONDON — Prompted by publicity surrounding recent child abuse scandals involving well-known figures, dozens of British men are breaking decades of silence about molestation they say they suffered as boys at expensive private schools, forcing the schools to confront allegations that in the past might have been hushed up, ignored or treated derisively. 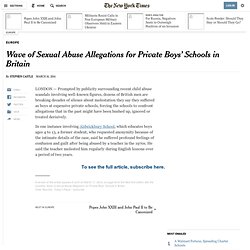 In one instance involving Aldwickbury School, which educates boys ages 4 to 13, a former student, who requested anonymity because of the intimate details of the case, said he suffered profound feelings of confusion and guilt after being abused by a teacher in the 1970s. He said the teacher molested him regularly during English lessons over a period of two years. With the teacher dead, and in the absence of an apology from the school, the former student brought a civil case against Aldwickbury, which was settled with a payment. 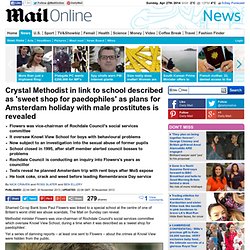 Investigations. Establish a national inquiry into allegations of organised child abuse. Going viral ? / july 2014. Commission d'enquête (Cameron) Met’s ‘VIP paedophiles’ probe turns into murder investigation. Detectives are investigating the sadistic killing of a young boy as they examine allegations of a paedophile ring linked to politicians and other VIPs. 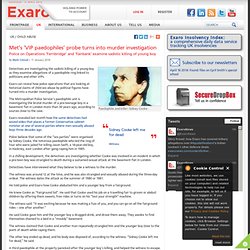 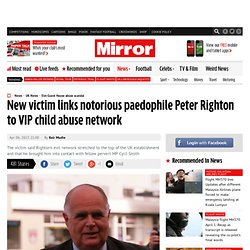 Speaking out for the first time, the man claims Righton’s evil network stretched to the top of the UK establishment. As well as naming a senior UK politician, the victim also told us Righton – once the most respected childcare expert in Britain – brought him into contact with ­paedophile MP Cyril Smith. 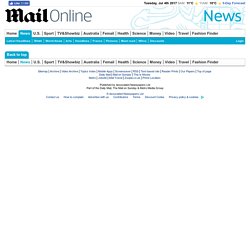 I met the frightened policeman at an isolated country restaurant, many miles from his home and station. Detective Constable Peter Cook had finally despaired, and decided to blow the whistle to a reporter. He was risking his career, so made me scribble my notes into a tiny pad beneath the tablecloth. He had uncovered a vicious child sex ring, with victims in both Britain and the Channel Islands, and he wanted me to get his information to police abuse specialists in London. 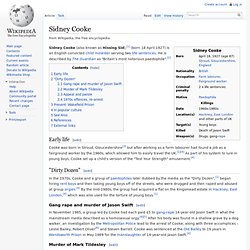 He is described by The Guardian as "Britain's most notorious paedophile".[2] Early life[edit] Cooke was born in Stroud, Gloucestershire[3] but after working as a farm labourer had found a job as a fairground worker by the 1960s, which allowed him to easily travel the UK.[1][4] As part of his system to lure in young boys, Cooke set up a child's version of the "Test Your Strength" amusement.[4] "Dirty Dozen"[edit] In the 1970s, Cooke and a group of paedophiles later dubbed by the media as the "Dirty Dozen",[1] began hiring rent boys and then taking young boys off of the streets, who were drugged and then raped and abused at group orgies.[4] By the mid-1980s, the group had acquired a flat on the Kingsmead estate in Hackney, East London,[4] which was also used for the torture of young boys.[1]

The Lost Boys (Operation Orchid BBC documentary, Sidney Cooke etc.) North Wales child abuse scandal. The North Wales child abuse scandal was the subject of a three-year, £13 million investigation into the physical and sexual abuse of children in care homes in the counties of Clwyd and Gwynedd, in North Wales, including the Bryn Estyn children's home at Wrexham, between 1974 and 1990.[1] The report into the scandal, headed by retired High Court judge Sir Ronald Waterhouse QC, which was published in 2000, resulted in changes in policy in England and Wales into how authorities deal with children in care, and to the settling of 140 compensation claims on behalf of victims of child abuse. 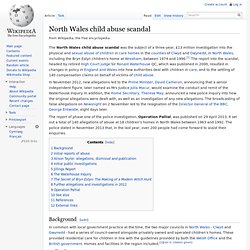 In November 2012, new allegations led to the Prime Minister, David Cameron, announcing that a senior independent figure, later named as Mrs Justice Julia Macur, would examine the conduct and remit of the Waterhouse Inquiry. In addition, the Home Secretary, Theresa May, announced a new police inquiry into how the original allegations were dealt with, as well as an investigation of any new allegations. CHILD ABUSE SCANDAL : The Bryn Estyn home wasn't fit for children. It has made my life since leaving a complete misery - News. For many of the young children, their lives were a living nightmare, the report says. 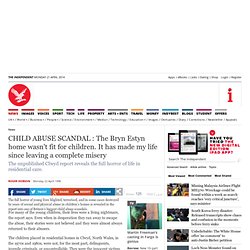 Even when in desperation they ran away to escape the abuse, their stories were not believed and they were almost always returned to their abusers. The children placed in residential homes in Clwyd, North Wales, in the 1970s and 1980s, were not, for the most part, delinquents, juvenile criminals, or uncontrollable. They were the innocent victims of domestic problems, sometimes four and five years old, who had been abused in their own families, or youngsters who had simply been abandoned. Welsh child abuse scandal: dozens more claims of sexual abuse emerge. Dozens of new allegations of sexual abuse have surfaced in Wales as child protection experts warned that the focus on mistaken allegations involving the Tory peer Lord McAlpine meant there was a danger the victims were being forgotten. 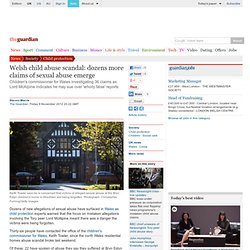 Thirty-six people have contacted the office of the children's commissioner for Wales, Keith Towler, since the north Wales residential homes abuse scandal broke last weekend. Of these, 22 have spoken of abuse they say they suffered at Bryn Estyn in Wrexham and the network of homes connected to it. Another 14 have told of historic abuse in other settings. On top of those who have gone to the children's commissioner it is known that a number of others – perhaps dozens more – have contacted politicians and solicitors to report abuse and ask for help. The children's commissioner urged the media to be more measured in its coverage. However, he said the media needed to recognise their "public interest responsibility".

Aleister Crowley. After an unsuccessful attempt to climb Kanchenjunga and a visit to India and China, Crowley returned to Britain, where he attracted attention as a prolific author of poetry, novels, and occult literature. In 1907, he and George Cecil Jones co-founded a Thelemite order, the A∴A∴, through which they propagated the religion.

After spending time in Algeria, in 1912 he was initiated into another esoteric order, the German-based Ordo Templi Orientis (OTO), rising to become the leader of its British branch, which he reformulated in accordance with his Thelemite beliefs. Through the OTO, Thelemite groups were established in Britain, Australia, and North America.

He spent the First World War in the United States, where he took up painting and campaigned for the German war effort against Britain, later revealing that he had infiltrated the pro-German movement at the behest of the British intelligence services. John Whiteside Parsons. John Whiteside Parsons (born Marvel Whiteside Parsons; October 2, 1914 – June 17, 1952), better known as Jack Parsons, was an American rocket engineer, chemist, and Thelemite occultist. A pioneer in solid-fuel rocket research and development, he was affiliated with the California Institute of Technology (Caltech), and was one of the principal founders of both the Jet Propulsion Laboratory (JPL) and the Aerojet Engineering Corporation.

Born in Los Angeles, California, and raised into a wealthy family in Pasadena, Parsons developed an early interest in rocketry inspired by science fiction literature, and in 1928 began amateur rocket experiments with school friend Edward Forman. Parsons' death attracted national attention, and his occult and individualist writings were posthumously published. The young Parsons and Wernher von Braun (pictured) had a long distance correspondence about rocketry Parsons (center) and GALCIT colleagues in the Arroyo Seco, Halloween 1936.

Macdonald said the police appeared to have "completely lost their moral compass", suggested some units had "gone rogue" and said the "drip, drip, drip" of "seedy and corrosive" stories threatened to undermine public confidence. CARE HOME ABUSE VICTIM -Tells of Sex Parties "Exclusive Personal Interview" DOCUMENTARY. Kincora Boys' Home. William McGrath. Early years[edit] McGrath was born on 11 December 1916 to a Methodist family living in Earl Street[3] in the Sailortown area of Belfast. McGrath married his English-born wife Kathleen, who served at the nearby Worldwide Evangelisation Crusade, and the two set up home on the Antrim Road before moving to Finaghy.[3] He was a member of the Orange Order and for a time acted as chaplain to the prestigious Fernhill Orange Lodge.[4] McGrath was also a branch member of the Ulster Unionist Party and for a time a delegate to the party, although he did not take a prominent role in party politics.[5] Their house in Finaghy, a large mansion, was named Faith House and became the centre for the Christian Fellowship and Irish Emancipation Centre which they established in 1941, with rooms made available for young people to stay.[3] McGrath travelled widely throughout Northern Ireland preaching his religious message, which included hard-line loyalist principles.

Lord Mountbatten linked to Kincora child abuse ring. It was alledged in the book 'War of the Windsors', and the Sunday People newspaper pg17, that Lord Mountbatten was rumoured to have been linked to the Kincora boy's abuse network. Lord Mountbatten the last viceroy in India, was reknowned to be wildly promiscuous, bisexual and to enjoy a bit of 'rough' or the plesures of young working class boys or indeed peasant indian boys.

The Nazi relative that the Royals disowned. Louis Mountbatten. Un article de Wikipédia, l'encyclopédie libre. Ken Livingstone. In 1999 Livingstone sought Labour's nomination to be the first elected Mayor of London; opposed by Labour Prime Minister Tony Blair and by left-wing Labour MPs Bernie Grant and Clive Soley,[3] the former Labour leader Neil Kinnock, the left-wing then-Cabinet Minister Clare Short,[4] and others in the Labour Party,[3] he successfully contested the 2000 election as an independent candidate, leading to his expulsion from Labour. During his first term, he organised a major upgrade of London's transport system, introducing the congestion charge and Oyster card. Rejoining Labour, he was re-elected in 2004, continuing and expanding his transport policies through mandatory bus and cycling lanes. Ken Livingstone, Kincora boys home, MI5 filming by GF23.

Elm Guest House child abuse scandal. The Elm Guest House child abuse scandal arose from claims of sexual abuse and the grooming of children by British politicians, at parties for men at the former Elm Guest House in Rocks Lane, near Barnes Common in South West London during the late 1970s and 1980s. An investigation, Operation Fairbank, which was led by the Metropolitan Police Service, started in late 2012. The investigation was a "scoping exercise" aimed at a "preliminary assessment of the evidence rather than a formal inquiry".[1] The existence of the operation was confirmed on 12 December 2012, after operating in secret for several weeks.[1] A full criminal investigation, Operation Fernbridge, was launched in February 2013 as a result of allegations arising from Operation Fairbank.[2] The allegations of an establishment paedophile ring are part of a complex multi agency investigation.[3]