You're Distracted. This Professor Can Help. - Technology 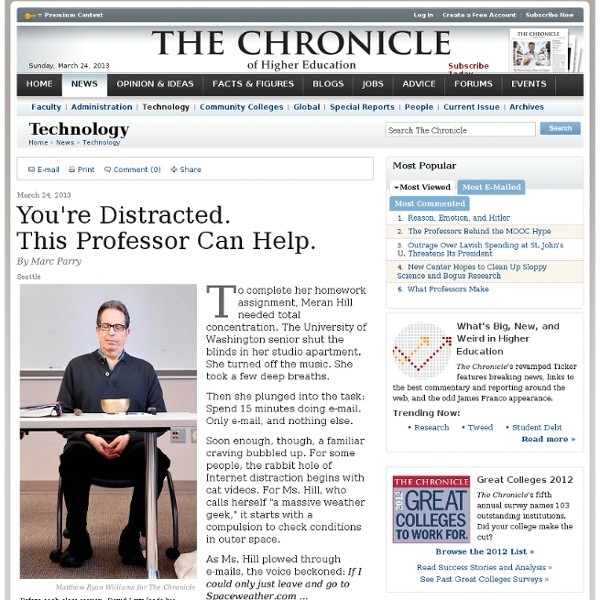 By Marc Parry Seattle Matthew Ryan Williams for The Chronicle Before each class session, David Levy leads his students in a few minutes of meditation. To complete her homework assignment, Meran Hill needed total concentration. Then she plunged into the task: Spend 15 minutes doing e-mail. Soon enough, though, a familiar craving bubbled up. As Ms. But the assignment had her trapped. The e-mail drill was one of numerous mind-training exercises in a unique class designed to raise students' awareness about how they use their digital tools. Their professor, David M. At its extreme, that debate plays out in the writing of authors whom the critic Adam Gopnik has dubbed the Never-Betters and the Better-Nevers. On college campuses, meanwhile, educators struggle to manage what the Stanford University multitasking researcher Clifford Nass describes as a radical shift in the nature of attention. Amid this scampering attention, some fear for the future of long-form reading. When I ask Mr. But Mr. Mr. Related:  Psychology

Carol Dweck, "Mindsets", Impostor Syndrome, Praise, and Early-Career Blues Carol Dweck, "Mindsets", Impostor Syndrome, Praise, and Early-Career Blues The following concept has literally changed my life and rescued my career. I know for a fact that a lot of people starting out in their engineering careers, on their first jobs as engineers, have to deal with these problems and issues. And I deal with them in other areas of my life too, even in areas like cooking and public speaking. And I have even heard of people who dropped out of high-school due to these issues. I am writing about this and posting it here in the hopes that people encountering this problem will find this page during their Googling. The following ideas have been developed by Carol Dweck during her work as a psychology researcher at Harvard, Columbia, and Stanford. • The basic idea, in summary: A lot of folks feel that people's abilities are primarily based on innate talent: some people are "smart", some people are "bad at math", some people are "good with languages", etc. • My story: Ok.

What it means to "hold space" for people, plus eight tips on how to do it well - Heather Plett When my mom was dying, my siblings and I gathered to be with her in her final days. None of us knew anything about supporting someone in her transition out of this life into the next, but we were pretty sure we wanted to keep her at home, so we did. While we supported mom, we were, in turn, supported by a gifted palliative care nurse, Ann, who came every few days to care for mom and to talk to us about what we could expect in the coming days. She taught us how to inject Mom with morphine when she became restless, she offered to do the difficult tasks (like giving Mom a bath), and she gave us only as much information as we needed about what to do with Mom’s body after her spirit had passed. “Take your time,” she said. “You don’t need to call the funeral home until you’re ready. Ann gave us an incredible gift in those final days. In the two years since then, I’ve often thought about Ann and the important role she played in our lives. What does it mean to hold space for someone else?

Evaluation of a Mindfulness-Based Intervention Program to Decrease Blood Pressure in Low-Income African-American Older Adults Beyond Critical Thinking: Can We Teach Commitment? Critical thinking has so thoroughly colonized our idea of education that we tend to think it’s the only kind of thinking. Tests try to measure it, and ritzy private schools all claim to teach it. Critical thinking–analysis, not mere acceptance–is a skill we can all learn. And we’ve learned it too well. We’ve learned only critical thinking skills, and not the equally challenging skills of prudent acceptance: We don’t even realize that we need to learn when to say yes, and to what. We teach students to find the undefended premises of an argument, or the contradictions in a claim. If we allow any alternative to critical thinking, it’s creative thinking. What we don’t teach, and don’t even consider as something worth teaching, is the art of acceptance. If you think I’m hinting at a parallel to the culture of fear of commitment… you’re not wrong. Nobody can live by critical thinking alone. I realize that this post covers way too many different things.

where good ideas come from? worrying-about-stuff-is-a-sign-of-intelligence The tendency to worry about stuff could be a sign of a certain kind of intelligence, according to a paper in an upcoming edition of the journal Personality and Individual Differences (hat tip to Christian Jarrett at the British Psychology Society's Research Digest for spotting it first). A team led by Alexander Penney of Ontario's Lakehead University gave 126 undergrads a litany of surveys and questionnaires designed to measure both their intelligence and how much they tended to stress about events in their lives. (For instance, they were asked how strongly they agreed with statements like, "I am always worried about something.") After analyzing the results, Penney and his team found a correlation between worrying and verbal intelligence. Correlation doesn't imply causation, of course, but this is not the first paper to have found a link between anxiety and intelligence.

An Interview With Lisa Delpit on Educating 'Other People's Children' Share In her groundbreaking 1988 essay “The Silenced Dialogue: Power and Pedagogy in Educating Other People’s Children,” the elementary school teacher cum theorist Lisa Delpit dismantled some of the pieties of progressive education. Deliberately unstructured teaching strategies like “whole language,” “open classrooms,” and “process, not product” were putting poor, non-white children at an even greater disadvantage in school and beyond, Delpit argued. Instead, she suggested teachers should explicitly “decode” white, middle-class culture for their low-income students, teaching them Standard English almost as if it were a foreign language, for example, and introducing math concepts through problems with cultural resonance for disadvantaged kids, such as calculating the probability that the police will stop-and-frisk a black male, as compared to a white male. It is definitely true that children of non-college-educated parents are likely to have less school-based vocabulary. Everything!