You Grow Girl - Gardening for the People. 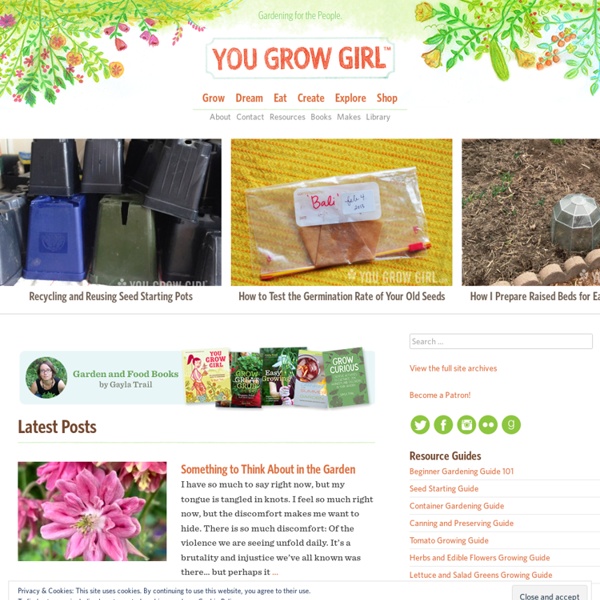 The weather over the weekend was glorious and full of spring’s promise. As previously mentioned, I took advantage and dove headlong into my early spring to-do list. In a typical spring I charge straight into these chores and make mention of them in passing, but rarely get into the nity-gritty of my process here. This … Chalkboard illustration by Davin Risk. There’s a double meaning to this title and I suspect that if you’re over 21 you know exactly what I’m talking about.

Tetragonia tetragonioides Tetragonia tetragonioides (previously T. expansa) is a leafy groundcover also known as Botany Bay spinach, Cook's cabbage, kōkihi (in Māori), New Zealand spinach,[1] sea spinach, and tetragon. Its Australian names of warrigal greens and warrigal cabbage[2] come from the local use of warrigal to describe plants that are wild (not farmed originally).[3] It is native to Argentina, Australia, Chile, Japan, and New Zealand. The species, rarely used by indigenous people as a leaf vegetable, was first mentioned by Captain Cook. It was immediately picked, cooked, and pickled to help fight scurvy, and taken with the crew of the Endeavour.[2] It spread when the explorer and botanist Joseph Banks took seeds back to Kew Gardens during the latter half of the 18th century.[4] For two centuries, T. tetragonioides was the only cultivated vegetable to have originated from Australia and New Zealand. There are some indications that Māori did eat kōkihi perhaps more regularly.

www.thehoneytreenursery.com Acer Palmatum "Fireglow" $Price Availability Seedling 8.80 n/a *See Note at top re: seedlings 'Fireglow' is the perfect name for this small upright Japanese maple. Easy vegetables to grow Planting a garden doesn’t have to be a huge undertaking. But the fear of failure keeps many a gardener-wannabe from spending time and energy on planting backyard crops. Knowing the easy vegetables to grow for your region — in addition to when and where to plant them — is the best way to ensure success. When planning your crops, try to space out the planting of foods that have a short harvest season.

2008 market garden crop listing You can’t grow everything, but there’s no harm in trying! That’s my production planning philosophy, till further notice. Here’s the preliminary crop list for 2011, as of early February. It will be undergoing some major changes! Corchorus olitorius Jew's Mallow, Nalta jute PFAF Plant Database Plants For A Future can not take any responsibility for any adverse effects from the use of plants. Always seek advice from a professional before using a plant medicinally. Demulcent; Diuretic; Febrifuge; Tonic. The leaves are demulcent, diuretic, febrifuge and tonic[240].

The Effects of Magnetite, Magnetic Water and Magnetic Monopoles on Plant Growth Introduction:For the past three years I have been drinking magnetic water for it's health and rejuvenating properties. I have reported about in the following web site: However also in these three years I have been using magnetic water and magnetite in the soil to stimulate the growth of plants. I have had some very exciting results in plant growth related to magnetite in the soil or watering plants with magnetic water so I feel it time to write about it now. Theory:Before I go into presenting the results of accelerated plant growth, that I have been witnessing, I feel a little explanation of the theory that I have developed to help me understand what is happening will be presented. First I refer to the classic work that Phillip S.

Top Ten Most Nutritious Vegetables and How to Grow Them in Your Garden A perfectly ripe, juicy tomato, still warm from the sun. Sweet carrots, pulled from the garden minutes (or even seconds!) before they're eaten. Growing your own vegetables is one of those activities that balances practicality and indulgence. In addition to the convenience of having the fixings for a salad or light supper right outside your door (or on your windowsill), when you grow your own vegetables, you're getting the most nutritional bang for your buck as well. Vegetables start losing nutrients as soon as they're harvested, and quality diminishes as sugars are turned into starches. 7 Habits of Successful Gardeners Originally published January 2009 Or is it the Seven Pillars of Horticultural Wisdom? As everyone's resolutions remind us, we love attaching a number to advice, a number smaller than the one I regard as most realistic: The Twenty Three Thousand Four Hundred and Sixty-Two Things It's Important to Remember Before Getting Out of Bed. So be warned: I haven't really honed it down to only seven; these are just the first seven essentials that came to mind when I decided to do this. And not in order, either. Make CompostUse CompostPlant Crops in Wide BedsMulchFeed the Soil, Not the PlantsShare SomethingBe There

Daubenton’s kale – growing and cooking Daubenton’s kale (Brassica oleracea var ramosa) is a perennial vegetable that seems to have everything going for it: tasty, hardy, productive and easy to grow. I also grow nine-star perennial broccoli (Brassica oleracea botrytis aparagoides – actually a sprouting cauliflower) which is often touted as a perennial, but really it’s just a biennial that manages to hang on for a few more years if you zealously remove all the flowers. Daubenton’s, on the other hand, is the real deal, a perennial kale that usually lives for 5 or 6 years. It seems that a lot more kales used to be perennial, but Victorian seed companies selected for biennialism in order to be able to sell the same variety year on year. A few old varieties have hung on by being passed from gardener to gardener, leading to a plethora of names such as Ragged Jack, tree collards, Woburn kale, Taunton Deane and many others which may or may not be the same as each other. Variegated Daubenton’s kale cutting under apple tree, spring 2012

The Deliberate Agrarian Blogazine June 2012 Seven Years.... .....and plodding(a reflective ramble about blogging and agrarian visions) On June 18, 2005 I established this blog. I subtitled it, One Man’s Ruminations About Faith, Family & Livin’ The Good Life. And I began with a short first post titled, The Ruminations Begin, which stated the premise and purpose of The Deliberate Agrarian. Guide to Growing Vegetables Some general considerations for growing vegetables: Sowing Tips When sowing seeds, a good general rule of thumb is to sow to a depth of approximately twice the thickness of the seed. Some smaller seeds require light to germinate and should not be sown too deep; otherwise they may never germinate or break through the surface of the soil.

Chaya/Tree Spinach/Cnidoscolus aconitifolius Would you like to try the challenge of Chaya? Though you need to be absolutely sure you’re not afraid, wild Chaya are a gourmet delicacy anyone can have and enjoy it without fear. Eat this – it’s good for you! Chaya, also known as Tree Spinach, often confused with Chenopodium giganteum is a large, fast growing leafy perennial shrub, native to the Yucatan Peninsula of Mexico. Although found widely throughout the Maya world, the greatest variety of names for the plant as well as knowledge of its use is found in Yucatán, which points to the region as the area of origin and the place where Chaya was ultimately domesticated. There are several varieties of Chaya, but the most common, Chayamansa, cannot reproduce sexually and so it is understood to be a domesticated plant that must be tended by human beings.

You Grow Girl is full of tips, trick and ideas to begin gardening in any space. Gayla Trail is the author of several books about urban or small space gardening, including her first book, "You Grow Girl." Her articles are good for the beginner gardener and expert alike, she covers topics from seed sowing to space design. by emisma May 16