Columnar Fruit Trees: Create an orchard on your own patio! - Crafts Archives. Do you think that because you live in a city or urban area you cannot enjoy fresh fruit from your own trees? 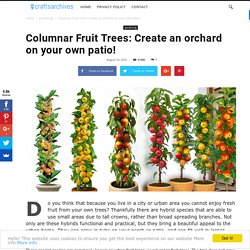 Thankfully there are hybrid species that are able to use small areas due to tall crowns, rather than broad spreading branches. Not only are these hybrids functional and practical, but they bring a beautiful appeal to the urban home. They can grow in tubs on your porch or patio, and can fit well in larger areas, where they can be laid out in a pleasing manner, along curb lines, or in gardens.

These special species are commonly known as urban fruit trees, or columnar fruit trees. The tree does not grow outward in a horizontal direction, but up due to short branches, often appearing as a spire and is quite dignified and elegant for the urban environment. Growing a columnar fruit tree is fairly straightforward. The Best Producing Okra to Plant. Part II: All You Need to Know About Growing Coffee Trees in Your Home - Thanksgiving Coffee. 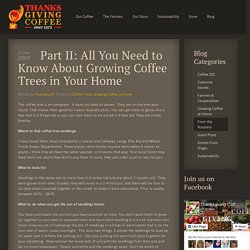 Posted in Coffee Trees, Growing Coffee at Home The coffee tree is an evergreen . It does not shed its leaves . They are on the tree year round. Where to find coffee tree seedlings: I have found them most consistently in places like Safeway, Longs, Rite Aid and Whole Foods flower Departments. What to look for: Seedlings in the stores are no more then 3-4 inches tall and are about 3 months old . What to do when you get the pot of seedlings home; You have purchased one pot but you have acquired six trees. Lets talk soil and repotting; For the four inch pot and your initial repotting, you should use an organic potting soil. When the tree gets to the 24-36 inch size it is time for it’s final repotting into a half wine barrel or the equivalent. Flowering Phase: It lasts about a month. Jungle Jasmine : Coffee Flowers The Fruiting Phase: This phase lasts about six months. Oreganum facts. Adapted in part from 'Oregano' by permission of The Natural Food Hub www.naturalhub.com WHAT IS 'OREGANO' ? 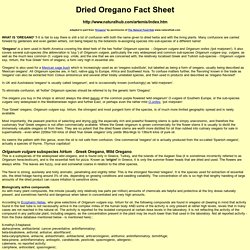 -It is fair to say there is still a lot of confusion with both the name given to dried herbs and with the living plants. Many confusions are carried forward by gardeners and even garden writers, not being helped by the botanists re-assigning species into sub-species of a different name! 'Oregano' is a term used in North America covering the dried herb of the two 'hotter' Origanum species - Origanum vulgare and Origanum onites ('pot marjoram'). 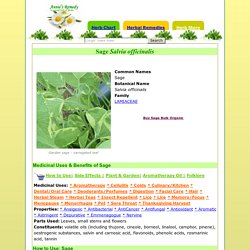 “ Why should a man die whilst Sage grows in his garden?” The Arabs, along with everyone from the Chinese to the Gypsies all believed that sage was the key to a long life. This is the same sage that in most modern households gathers dust for most of the year, only to be brought out in the fall to season the Thanksgiving dinner, usually used with too heavy a hand, explaining its unpopularity with cooks during the rest of the year. Sage is one those extraordinary, ordinary herbs whose longstanding and familiar use leads us to greatly underestimate it. The uses of sage outside of the kitchen range from the mundane to the mystical, from a cure for the common cold to the psychoactive effects of Salvia divinorum and Salvia apiana in ceremonial and religious celebrations.

Sage is an excellent natural disinfectant and deodorizer, drying perspiration and helping to eliminate body odor. The Chinese have long valued sage for its healing properties. Tassel, Musk and Grape Hyacinths. Muscari "Blue star" There are dozens of edible species that are wild in Europe and cultivated or escaped in North America. 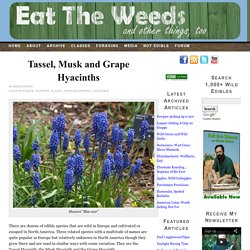 Three related species with a multitude of names are quite popular in Europe but relatively unknown in North America though they grow there and are used in similar ways with some variation. Plant Recommendations Zones 6-8 » Edible Landscaping with Rosalind Creasy. USDA Zones 6 through 8 cover areas of the country where the winter low temperatures seldom go below – 10 degrees F. 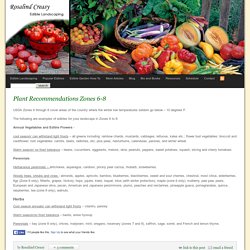