The Tunnel Of Trees 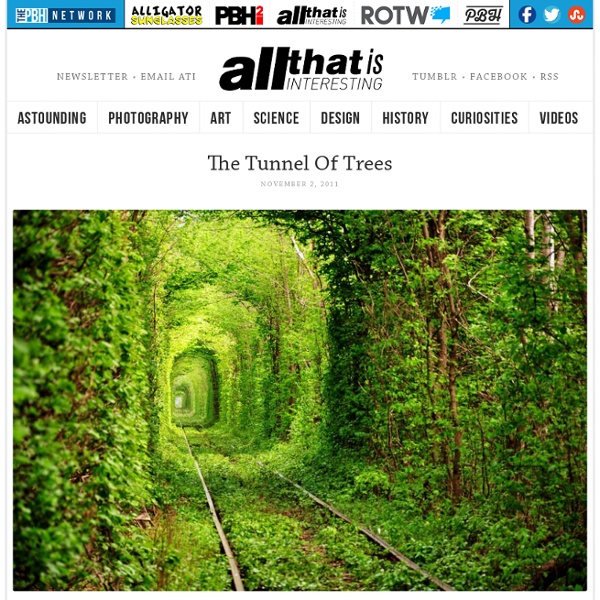 photos by Phil Stern James Dean Frank Sinatra Anita Ekberg Marlon Brando Lauren Bacall with Humphrey and Stephen Bogart Top 20 Earth Pictures found on Stumble Upon Everybody knows that Stumbleupon is an great source for beautiful photography, nature, pets, arts and much more. They have millions of users and they are probably the most wide used source for finding quality content. Today, we collected 20 popular photographs from Stumbleupon. Most of them have been seen for more than million times each. We hope you’ll enjoy… Photo Source Craft DIY Projects, Patterns, How-tos, Fashion, Recipes @ Craftzine.com - Felting, Sewing, Knitting, Crocheting, Home & More Quilling, the coiling and shaping of narrow paper strips to create a design, has been around for years — hundreds, in fact. During the Renaissance, nuns and monks would roll gold-gilded paper remnants trimmed during the bookmaking process, and use them to decorate religious objects as an alternative to costly gold filigree. Quilling later became a pastime of 18th and 19th century young ladies in England, who would decorate tea caddies and pieces of furniture with paper filigree. The practice crossed the Atlantic with colonists, who added quilling to candle sconces and trays as home decorations. In all of that time, the process has remained very much the same, but quilling designs and specialty supplies have definitely caught up to the 21st century.

10 Most Famous Trees in the World Famous trees come and go. L’Arbre du Ténéré was once considered the most isolated tree on Earth, a landmark on caravan routes in the Sahara, until it was knocked down by a drunk Libyan truck driver in 1973. This year in August, the famous Anne Frank tree in Amsterdam was blown down by high winds during a storm. Luckily, there are still many special trees out there. An overview of the most famous trees in the world. photos by Irving Penn The Hand of Miles Davis Georgia O'Keeffe, Gypsy Rose Lee Ballet Society, 1948 Truman Capote, Spencer Tracy Joe Louis Duchess of Windsor, Mrs. Stuffed Fabric Turtles (with pattern pieces) We were shopping around, down in Florida, after we went to the zoo several weeks ago (yes, in Jacksonville…..some of you asked)……..and we stopped by a Pottery Barn Kids store. I’m a window shopper. Well, and an inspiration-seeker shopper. I love walking around and daring myself to find something I want to make.

The most beautiful suicide On May 1, 1947, Evelyn McHale leapt to her death from the observation deck of the Empire State Building. Photographer Robert Wiles took a photo of McHale a few minutes after her death. The photo ran a couple of weeks later in Life magazine accompanied by the following caption: On May Day, just after leaving her fiancé, 23-year-old Evelyn McHale wrote a note. Rare and very interesting photos Interesting and very rare photographs, you may never see. The first McDonald’s. Che Guevara and Fidel Castro. Capital of Brazil, on the beginning. photography by Angus R Shamal A self portrait of Stanley Kubrick with his daughter, Jack Nicholson and the crew @ the set of The Shining. A selection of some of the most awesome Behind-the-scenes shots I’ve seen from some famous movies found at aintitcool.com. Back when set designs were huge and hand made, when special effects where mechanic and photographic and film stars were risking their lives on the set. on the set of Fritz Lang’s Metropolis — the actress inside the Maria robot taking a breather. The Empire Strikes Back - filming the Crawl.