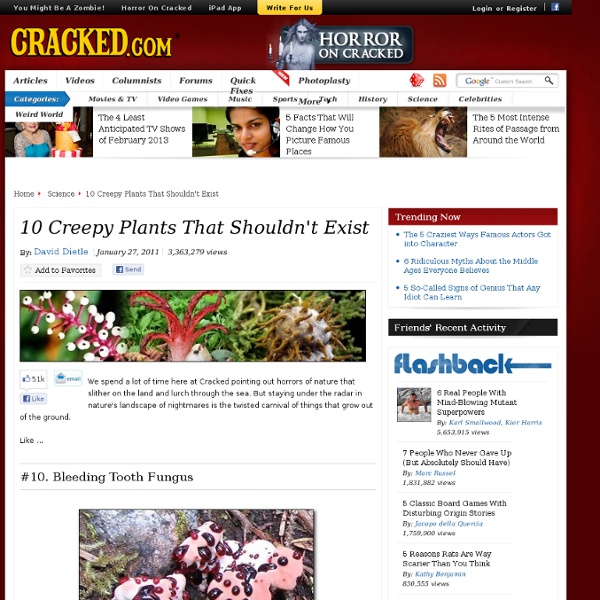 We spend a lot of time here at Cracked pointing out horrors of nature that slither on the land and lurch through the sea. But staying under the radar in nature's landscape of nightmares is the twisted carnival of things that grow out of the ground. Like ... Bleeding Tooth Fungus The bleeding tooth fungus looks kind of like a wad of chewing gum that leaks blood like a rejected prop from The Shining. They're also called the strawberries and cream, the red-juice tooth, and the devil's tooth. Oh, and they are listed as "inedible," which implies that someone attempted to eat one at some point. Chinese Black Batflowers There's a good reason that Batman uses bat imagery to strike terror into the hearts of Gotham's criminals, rather than, say, some kind of shrew. It is kept as an ornamental plant by gardeners who prefer to cultivate nightmares, and have the balls to live in the presence of a plant that looks like it crawled out of a Bosch painting and wants to plant its young in their head.

7 People From Around the World With Real Mutant Superpowers They walk among us! Some even fly among us! They may even take the bus among us from time to time! We're carefully tracking their progress, so that one day soon we may gather them together and fight crime. Real Name: Unknown Uberboy's name is being kept secret, presumably to protect the lives of his loved ones once Uberboy dons a mask and begins patrolling the streets of the world righting wrongs. Superpower: Bona fide Super-Strength. One day in 1999 a little baby boy was born in Germany, at first glance no different from any other. But how did this happen? It's not clear what will happen as Uberboy grows up. What we do know is that at 4-years-old, Uberboy could lift six times more weight than an average kid. Scientists, instead of building giant laser shooting robots to hunt him down, decided to study him and try to find ways to use this new knowledge to help people with muscle dystrophy. Real Name: Ben Underwood Superpower: Super Echolocation Human echolocation is not really new.

5 Reasons Immortality Would be Worse than Death Time Speeds Up Until You're Insane How many of you out there are old enough to notice time speeding up? For those of you who aren't, can you remember when you were a kid and the school year finally ended and the summer was about to begin? Every year of your life seems shorter than the previous one since each passing year represents smaller and smaller portions of your life. So when you're 100 years-old, a minute will seem six seconds long compared to a minute when you were 10. "What was her name? Live to be a million, and people will seem to be just exploding in and out of existence around you, like a time lapse video of a mountain slowly eroding over eons while cities and nations appear and disappear around it, unnoticed. See, this is why Dr. You'll Eventually Get Trapped Somewhere (Forever) We spend so much time being afraid of death that we forget the one, overwhelming benefit death offers every species: cutting short suffering. Even if you make it out unscathed, you're now alone.

6 People Who Defied Gravity (And Then Kicked It in the Nuts) Gravity sucks. It's always keeping us down, preventing cars from hovering and cruelly denying people the God-given right to have Inception-like fights on the ceiling of hotel hallways. And yet, despite limitations, brave people throughout history have heroically told gravity to go straight to hell. And some of them even lived through it. #6. Getty We're pretty sure that Colonel William Rankin experienced something that no other member of the human species has experienced. Rankin was flying along in his fighter jet in 1959, zipping over some storm clouds at about 50,000 feet. Getty"Clouds are nature's soggy pillows. This being summer and North Carolina, Rankin wasn't exactly dressed for a blizzard. First, massive updrafts kept thrusting him back up into the storm, again and again. fedoradudescommentary.blogspot.comWe repeat: This man almost drowned ... in the sky. Unfortunately, Rankin did die after the incident. #5. wikiFurther proof that no sane man has that mustache. #4.

7 WTF Military Weapons You Won't Believe They Actually Built The Awesome Most of you will remember the AT-AT walkers from The Empire Strikes Back as both pretty fucking rad, and among the most impractical vehicles in sci-fi movie history. But before the rebel alliance could show the world how easy it is to trip a giant robot with legs, General Electric was developing their own AT-ATs. It never went into production. Enter Big Dog, the U.S. If you stuck with that clip to the end, you saw Big Dog stay on its feet when a grown man kicks it as hard as he can, and jumping like a robotic water spider. The Problem The whine of its robot motor sounds like a banshee that's swallowed a margarita mixer, and it takes tiny baby steps that suggest Arthritic Dog would have been a more accurate name. Of course, as technology advances, the Big Dog will only get faster and quieter. One-Wheel Tank/Ball Tank In 1936, memories of the blood-soaked trenches were still fresh in the minds of a generation. Based on the above diagram, everything seems to be above board.

6 "Non-Lethal" Weapons That'll Make You Wish You Were Dead So with the whole meltdown of the financial system, you're probably thinking about rioting soon. But while you gather up your bottles and stones and get ready to face down The Man, there's something you should know. The riot police and military are both plunging into the future of crowd control, inventing space-age weapons that won't kill you, but will make you wish they had. Such as... The PHASR (aka Crowd-Blinding Rifle) This futuristic weapon is being developed by the US military, who call it the Personal Halting and Stimulation Response rifle. They also call these weapons "dazzlers," proving for the second time in two paragraphs that many weapons designers have never known the touch of a woman. Why It Won't Kill You: According to the makers of the weapon, when used properly it doesn't, under any circumstances, kill you or do any lasting damage. Why You'll Wish it Had: Ever went for a piss in the middle of the night, walked into the bathroom and turned on the light? The Army: Yes.

5 Things You Won't Believe Are Making You Dumber Tell people that their diets or habits are making them fat or out of shape and they shrug -- we hear that crap every day. Tell them that their habits make them stupider and you're about to have a fight. We all know that our brain is a part of our body, but nobody likes to think of their intelligence as something that can get weak and flabby due to things that are out of our control. Science says otherwise. Studies have shown ... #5. Getty Have you ever been in a situation where you had to work with other people (like a meeting at work or forming groups in school) and suddenly felt like everyone involved was suddenly dumber than normal? GettyThe subtle science of hate. It turns out that just being in meetings and group situations can drain your brain. So, the more competitive the group is, the dumber some of its members will become. Getty"Can't we just handle this separately and talk about it later? This gets even more complicated if your work group includes both men and women. #4. #3.

9 Normal Things That Look Trippy Under a Microscope Whoa. So deep down, every pina colada is like staring at peacock feathers after dropping, like, all the acid. We're surprised we've never pissed out Joseph's Amazing Technicolor Dreamcoat after overindulging on these. You might think there's some computerized color enhancement at play here, but that's actually a photograph taken by BevShots, which achieved the effect by allowing the drink to dry on a microscope slide, shining some natural light onto it and taking an extreme close-up with a plain old 35 mm camera. Let's look at a few more. Via Bevshots.comFaith and Begorra! What, not artsy enough for you? Via Daily Mail And while that looks like some kind of experimental artwork from the '70s, a margarita ... Via Telegraph ... is channeling Georgia O'Keeffe. We're honestly surprised by how beautiful all of these are. Via Daily MailIt's the only drink that judges you while you sip.

7 Mind-Blowing Structures Built in Secret Humans build incredible things. Chances are good that you passed something on your way to work this morning that would make our ancestors accuse someone of witchcraft. But we never stop to wonder what awe-inspiring creation someone could be producing right under our noses, because why would anyone build something impressive and keep it a secret? Plenty of (usually insane) reasons, it turns out. The next time you look out your window, you might be totally unaware that you're staring right at something like ... #7. oobject In September of 1924, a truck was driving in Washington, D.C., when its tires sank into the ground. thelocation"The Morlocks want us to keep the noise down." Dr. Getty"You think the garbage man will suspect anything if I leave this out on the curb?" Once people got their heads around the fact that one guy had really done this all by himself, the search must have been on for all the dead people he'd dug the tunnels to store. "I did it for exercise," he said. #6. Getty #5.