Play the Rings of a Tree Trunk Like a Record 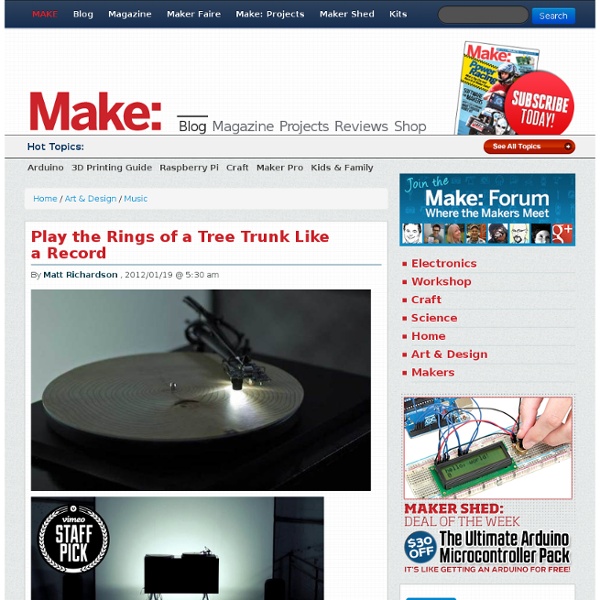 30 Albums That Define Cool Any album “list” is going to be incomplete. It’s going to be filled with albums you agree with, artists you hate and some sort of commentary that you probably disagree with. This list is no different. However, rather than ranking these in order of importance or influence, we decided to pick 30 Albums that Define Cool. It’s not a “Best of XXXX” list by any stretch of the imagination (because honestly, that would be presumptuous), just thirty albums that we think are cool. These things tend to spark huge debates, so feel free to let us have it in the comments.

The Chromatic Typewriter Washington-based painter Tyree Callahan modified a 1937 Underwood Standard typewriter, replacing the letters and keys with color pads and hued labels to create a functional “painting” device called the Chromatic Typewriter. Callahan submitted the beautiful typewriter as part of the 2012 West Prize competition, an annual art prize that’s determined by popular vote. I don’t know how practical painting an image with a color typewriter is, but if Keira Rathbone can do it… (via dark silence in suburbia)

Action Games Description **8/24 2PM ** Multiplayer Server back up! Thanks for your patience :). Welcome to Exit Path 2. It's time to start running, once more. Exit Path 2 is a Uniplayer and Multiplayer platforming experience, taking place in the dystopia of Central, a large faceless organization which you have escaped from. Music evolution: Is this the end of the composer? 18 June 2012Last updated at 20:47 ET By Rebecca Morelle Science reporter, BBC News Professor Armand Leroi from Imperial College London explains why he thinks a Darwinian computer program that can evolve music from noise could kill off the composer You might think that creating the perfect piece of music - whether it's a classical great, jazz masterpiece or pop hit - is all down to the composer's talent, flair or even genius. Not so, according to Armand Leroi from Imperial College London. "What we are trying to find out is whether you need a composer to make music," says the professor of evolutionary developmental biology. "And we don't think you do."

Harmful Viruses Made of Beautiful Glass When glass blower Luke Jerram saw visualizations of viruses and pathogens in the scientific world he noticed one big theme: color. Wondering what effect the artificial color in normal scientific drawings had on our interpretation of these invisibly small forms, he created his own exquisite versions out of his favorite material: blown glass. Covering such well known maladies as AIDS and Swine Flu, his works are both beautiful and disturbing, challenging observers to reinterpret their view of the tiny organisms. The pieces, each about 1,000,000 times the size of the actual pathogen, were designed with help from virologists from the University of Bristol using a combination of scientific photographs and models.

I Like Music cartoon by Stuart McMillen - Recombinant Records This cartoon is dedicated to my number one resource for music discovery: rateyourmusic.com.If you were into this cartoon, the book I quoted from, "Our Band Could Be Your Life" is well worth the price. As are the music, concert tickets and merchandise of all bands in question.Much of this cartoon was drawn in "a world of books, and silent times in thought" - the UQ Social Sciences and Humanities library. Back to post / website.

Tattoo Culture and Art Daily - StumbleUpon Posted on October 18, 2011 by lenny . Xoïl is a tattooer at Needles Side Tattoo in Thonon-les-Bains, France. tampabay.com & the St. Petersburg Times - StumbleUpon It's almost time for college students to begin fall classes, so I thought it would be good to compile a list of gadgets for college dorms and apartments. The obvious ones, like smartphones, laptops, iPads and calculators aren't listed here because I went for the fun and unique gadgets instead. Take a look and let me know if you've found something cool that should be included. (Scroll to the bottom to see a video that demonstrates the gadgets.)

Lesson Plan for Making a Speaker Laboratory ©1995 The Regents of the University of California by Regan Lum Introduction: Stone Footprints – The stone art of Iain Blake Stone Footprints – The stone art of Iain Blake The “Stone Footprints” series of photographer Iain Blake, beautiful, simple and cute land art made ??with round pebbles found on the beach. Headphones on. Eyes closed. Music: take me away. I’m in the mood to drunkenly dance to very loud music that I can sing to. Requested by Ellie · Compiled by Ilana 01. The Kingsmen - “Louie Louie” (Very Best: Kingsmen) 02. The Aquabats - “Pizza Day” (Don’t Be Scared) 03. Къщата на хобитите в Уелс - StumbleUpon URGENT: Computer Backup Required Matt Folson - Microsoft Specialist Your computer has become slow, unresponsive, displaying errors, or has started experiencing other issues. These issues are often caused by Viruses, Malware, or improper maintenance of your system. Malware and Viruses can cause program lock-ups and crashes, unwanted pop-ups and ads, slow PC performance, system freezes, start-up and shutdown problems, error messages, and total system failure.

Make your own Airsoft machine gun with a soda bottle Would you like to own an Airsoft gun, but can’t afford to buy one? How about making one instead using a soda bottle? Better yet, how about making a machine gun that only requires 4 cheap and commonly available parts that’s capable of firing hundreds Airsoft BBs before a reload is required? The informative video below shows you exactly how to do that for around $15. The parts you’ll need include a plastic soda bottle, a quick release air compressor adaptor, an air compressor blowgun, and a 7mm by 6-inch brake line.