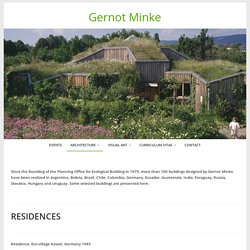 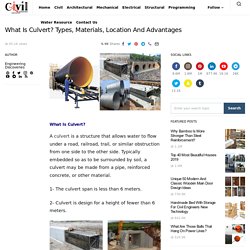 A culvert is a structure that allows water to flow under a road, railroad, trail, or similar obstruction from one side to the other side. Typically embedded so as to be surrounded by soil, a culvert may be made from a pipe, reinforced concrete, or other material. Earth-Sheltered Housing and Living Roofs – Earthwood Building School. My Underground house build (wofati and earth berm forum at permies) Underground housing (wofati and earth berm forum at permies) Paul invited me here, due to a beating I was taking at another forum. 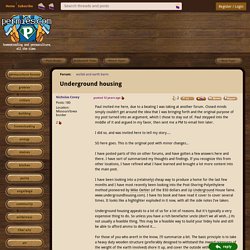 Closed minds simply couldn't get around the idea that I was bringing forth and the original purpose of my post turned into an argument, which I chose to stay out of. Paul stepped into the middle of it and argued in my favor, then sent me a PM to email him later. I did so, and was invited here to tell my story.... SO here goes. This is the original post with minor changes... The first wofati - allerton abbey- version 0.7 (wofati and earth berm forum at permies) We are calling the first wofati "version 0.7 beta". 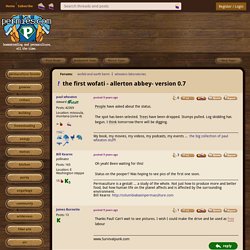 Well, I decided to call it that. This is a bit of a throwback to my old bananacom stuff. I uploaded "version 0.7 beta" to compuserve in 1993 or 1994 and in less than 24 hours I found that I had created a big winner. Plus "version 0.7 beta" implies "this is an unfinished experiment. " What we learn from this will help us to make a better version 0.8 and then move on to create version 1.0. Ant Wofati Progression (wofati and earth berm forum at permies) Glenn Herbert wrote:It's good to see a design professional working on the wofati concept, bringing other ideas to bear that may not have occurred to the initial developers. 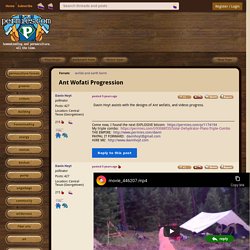 I do have thoughts on some of these topics. In no particular order, the concept of turning the rectangular space to expose the corners and have interior angles maximizing contact with the thermal mass is sound. It potentially gives more interior volume with less weather exposure, while still letting light reach directly to every part of the interior. I don't understand the value of making two straight "tunnel" exits from each corner; you would get significantly more light yet not much more heat loss by letting light in from all angles at the corner. The plan of covering the wing walls with roofs, and only a few oval openings, would turn the interior into a cave and for many people this would cause claustrophobia or at least much less comfort and enjoyability. My goal is to achieve a Wofati 1.0 plan/model.

From Hobbiton to Tatooine: Earth Sheltered Homes Make Sense All Over the Universe. After our slideshow, Hobbit Houses We Have Known: A Tour of Underground and Earth-Sheltered Houses, a number of commenters pointed out that we had missed a whole lot of houses. 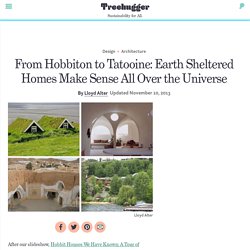 It's true; we were primarily showing projects that, as the title said, we have known. However, it inspired me to go out and find more. Probably the real reason Tolkien put the hobbits in earth-sheltered houses is that he knew them from Ireland and Iceland, two countries where people did it because it was much warmer in the winter. It so happens that it is also much cooler in the summer. Iceland Earth Covered Homes Building like this in Iceland makes some sense; there are very few indigenous building materials and not much to burn for heat. Irish Turf Houses Conditions were much the same in Ireland, where turf was both the roof and the fuel. Magical Hobbit-Like Eco Cave House. $50 and Up Underground House Book – Underground Housing and Shelter.

(192) Pinterest. Stoned and Green in Vietnam – The Owner-Builder Network. Dong Trieu, Quang Ninh Province, Vietnam – Vo Trong Nghia Architects Built: 2011Photography: Hiroyuki Oki If you have looked at ‘Wind and Water’, you’ll know why we really like the work of this firm of architects. 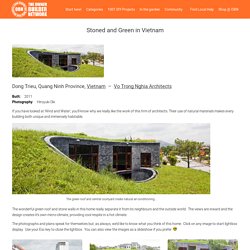 Their use of natural materials makes every building both unique and immensely habitable. The wonderful green roof and stone walls in this home really separate it from its neighbours and the outside world. The views are inward and the design creates it’s own micro-climate, providing cool respite in a hot climate. The photographs and plans speak for themselves but, as always, we’d like to know what you think of this home. You’ll find the wonderful Wind and Water Cafe here… 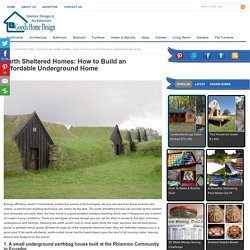 As you can see from these pictures and videos, a well-known building technique can easily do the task. The earth-sheltered homes can provide all the comfort and tranquility you seek. Also, the final result is a good weather-resistant dwelling which won’t disappoint you in terms of modern living conditions. There are two types of home design you can opt for when it comes to this type of homes: underground and bermed, meaning the earth covers one or more walls while the main structure can be built above grade or partially below grade.

Browse through all of the examples featured here, they will definitely impress you in a good way! Build The Most Beautiful Underground House Villa by Ancient Skills. Tiny Remote Norway Cabin - Hidden Natural Cabin. If you've ever craved some serious alone time, this just might be the place to do it. 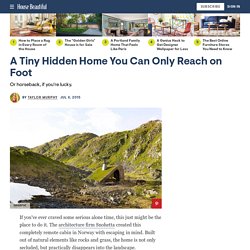 The architecture firm Snohetta created this completely remote cabin in Norway with escaping in mind. Built out of natural elements like rocks and grass, the home is not only secluded, but practically disappears into the landscape. But if you're worried about being too lonely, your hiking buddies can join you on your retreat. Underground dome house of the family who led geese to fly home.

The caves of Guyaju, China. SOLARNE SAMOGREJNE ZEMUNICE. Bringing the house down. Building a new country house has always been a balancing act. 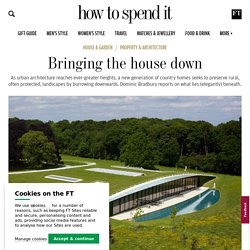 The question of how you can build a house in a place you love without offending the landscape that enticed you there is something architects have grappled with for centuries. Now, in an era of rising eco-sensitivity, a new way of creating beautifully conceived but sensitively designed rural homes has begun to flourish. 10 Spectacular Underground Homes Around The World. Even though it’s uncommon, some people prefer to live underground, literary. It’s an interesting alternative to regular homes and, whether it’s a decision based on style, personal preferences and the wish to recreate an image from a movie, living in any of these homes must be unique. You will be surprised to see how similar these homes are to those almost everyone has gotten used with. 1. The Rural Landowner’s Guide to Earth Sheltered Homes. Could an earth sheltered house be right for you?

An expert explains how these affordable alternative, energy-efficient homes are built. One of the joys of owning your own rural land is the freedom to build whatever type of home and structures you want on it. Canopy Camping. Waikato Maybe you've just completed a North Island tour of the magical Hobbiton movie set or Waitomo glow worm caves - or maybe you just want to escape the modern world for a bit. In either case - we have just the thing... Step out of the hustle and bustle of your real life, and straight into a fairytale, with a stay at the enchanting Underhill Valley. Built into the hillside, this hobbit-style accommodation has been beautifully hand crafted with rustic native timbers and ironwork, to create a sustainable and authentic space.

(8) Facebook. (3) Underground dome house of the family who led geese to fly home. Earth-Sheltered Homes Save Energy. At first glance they may look like hobbit homes or Luke Skywalker's childhood home on Tatooine. But the architects behind earth-sheltered homes say the houses are designed to save money, as well as offer ultimate protection from extreme weather. You can find earth homes in varying climates around the world from Kansas to Switzerland to Singapore.

The main draw is the drastic savings on energy bills. "Formworks homeowners are routinely using 80 to 90 percent less energy to heat and cool their homes," says Amanda D'Aleo with Formworks Building, Inc., a Colorado-based company that has been supplying the technology to build earth-sheltered homes for more than 30 years.

However, in the context of an earth-sheltered building, the existence of trees and shrubs on a site as well as the planting of new vegetation can be considered as another potential energy saving feature. Although exact amounts of energy savings are difficult to predict, there are uses of vegetation that are known to have a significant impact on energy performance. One effective use of trees in an earth-sheltered design is to shade windows on the south side of the house in the summer when the direct solar radiation is undesirable. If deciduous trees are used on the south side, they drop their leaves and allow the solar radiation to reach the windows in the winter when it is most needed.

Earth Sheltered Homes and Berm Houses. I Can't Have A Hobbit Home, Can I? - Modern Survival Living. Underground Houses: The Ultimate In Off-Grid Living? What if home was a garden? prize winner... - Build Naturally with Sigi Koko. Zelišča Kolarič. Ambienti TV show - HOBBIT HOUSE. Untitled. $50 and Up Underground House Book – Underground Housing and Shelter. Here is what Home & Garden Network (HGTV) had to say about Mike Oehler's underground house, on a special called "The Subterraneans", which has aired frequently. (Check your schedule for future airings): "This guy literally wrote the book on subterranean housing and sold more than (105,000) copies of The $50 & Up Underground House Book.

He lives in his own creation. It's a little snug but it's custom built and has all the creature comforts. You can barely see it, a dream get away nestled deep in the mountains of scenic Northern Idaho on 40 acres of land. World Economic Forum - This is the Icelandic hobbit home built to survive earthquakes and use zero energy. Cody Lundin’s Sustainable Home. There is an increasing need for change when it comes to living conditions. Pinterest. Pinterest. Scandinavian Homes Like Real-Life Hobbit Houses. Curb appeal: cozy exterior, extensive windows, and a green roof? These adorable homes prove that a grassy canopy can make the perfect ceiling addition to any house. Green roofs are traditional in many Nordic countries throughout Europe, so much so that there is an annual competition to determine the best green roof project, which is hosted by the Scandinavian Green Roof Association (SGRA). These images feature some of the most stunning living roofs that can be found around the area.

These green coverings are not only an aesthetic trend however—the feature offers a variety of environmental and financial perks. The roofs absorb rain water, cool the home in the summer and retain heat in the winter, provide insulation, and can even last longer than your typical shingles. Earth Sheltered.

Eccentric Aesthetics: DIY Eco-Friendly Earthbag Homes. The phrase “form follows function” has morphed in meaning over time and is, perhaps rightly, open to interpretation. One interesting extension of this idea is that the form of a building can follow the functions of its constituent parts – that the visual result can reflect the process of construction and that this, in turn, makes the architecture more educational or “honest” – a way to learn the history of a building simply by taking a look at how it was made. Han byggde på sitt Hobbithus i 40 år. Nu förtrollas en hel värld av insidan. Looking for a new house? Eco-friendly underground home on the market in Md. Scandinavian Homes Like Real-Life Hobbit Houses. Earth Sheltered Homes.