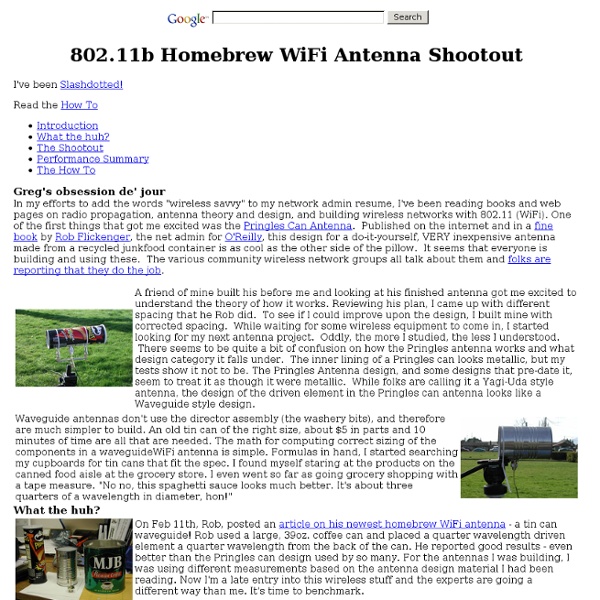 The Shootout My plan was to get relative performance measurements for various designs (including mine) of homebrew antennas for 802.11b (WiFi) wireless networks. To do this, I setup a wireless link and changed only the antenna- recording each antennas' performance under identical conditions. I didn't compare them to a commercial directional antenna as my only one has a male connector and I don't have the right cable to hook it up yet. The contestants were (click on each for design specifications). The Performance Summary The results surprised me! Of the waveguides, the Nalley's "Big Chunk" took top marks. With these results, I'm convinced that the waveguide design is the way to go for cheap wireless networking. The How To Build your own Tin Can Waveguide WiFi Antenna (Cantenna). Copyright 2003-2007 Gregory Rehm - All rights reserved.

Horizon Quantum - DragonWave Delivering from 2 to 4 Gbps per link, Horizon Quantum represents the next generation in packet microwave technology and sets a new benchmark for performance. With dual-channel capability, this split-mount system is a step change in spectral efficiency, capacity, nodal intelligence, and operational simplicity; all while occupying only half a rack unit and consuming the lowest power per bit of any solution today. In addition, the Horizon Quantum’s integrated switching means that it can provide aggregation and restoration in a single unit. With this level of performance – in a packet microwave system that is remarkably simple to install and operate – operators can now avoid the high cost and long delays associated with fiber deployments, yet achieve the capacity and reliability they require for all of their future applications and services. Solution Highlights:

Antenna on the Cheap (er, Chip) Antenna on the Cheap (er, Chip) Rob Flickenger Jul. 05, 2001 05:20 PMPermalink Like many would-be 802.11b hackers, I'm increasingly obsessed with pushing more bits further and faster for less cost (I believe the unofficial goal of our community wireless project is to provide infinite bandwidth everywhere for free. Of course, there are problems with approaching infinity, but it's still fun to try!) The work that Andrew Clapp and others have done is helping to demystify the ancient black magick of Resonance (i.e. antenna building). And so, over last weekend, some friends and I decided to give it a go for ourselves. (standard disclaimer): Anything you do with your gear is YOUR RESPONSIBILITY. Anyway, our first run was a direct rip-off of Andrew Clapp's terrific original design (knowing next to nothing about antenna construction, it's helpful to start off with a working known good.) Once this was up and running, we looked at the design, and of course speculated about ways to optimize it.

Backhaul (telecommunications) In a hierarchical telecommunications network the backhaul portion of the network comprises the intermediate links between the core network, or backbone network and the small subnetworks at the "edge" of the entire hierarchical network. In contracts pertaining to such networks, backhaul is the obligation to carry packets to and from that global network. A non-technical business definition of backhaul is the commercial wholesale bandwidth provider who offers Quality of service (QOS) guarantees to the retailer. It appears most often in telecommunications trade literature in this sense, whereby the backhaul connection is defined not technically but by who operates and manages it, and who takes legal responsibility for the connection or uptime to the Internet or 3G/4G network. See also hotspot contracts below. Other examples include: Backhaul capacity can also be leased from another network operator, in which case that other network operator generally selects the technology.

250+ working proxies for safe web access from work or school Ask the eConsultant : Technical Tips Proxy List : 250+ working proxies for safe access from work/school Just click on any proxy and enter URL on the resulting page. Report a new proxy / a non-working proxy : eConsultant » Blog Archive » Proxy List : 250+ working proxies for safe access Most Popular Pages : eConsultant | Blog | Articles | Book Reviews | Life Hacks | Lists | Personal MBA | Proverbs Archive | Quotations Archive | Selected Quotes | Technical Tips | Top Links | Web 2.0 { Contact | Resume } Wireless Network Design , Engineering and Mapping Services BLATANT PLUG FOR JUICE MONKEYS OF EDINBURGH OK, here’s the deal–if you’re looking for a good place to kick back with a smoothie, a coffee, a frappe, some fresh pastries or a sandwich, and surf the ‘net at the same time while visiting or living in Edinburgh, Scotland, you should pay a visit to Juice Monkeys. Check out their site at JuiceMonkeys.com. I’m loving the decore, the atmosphere, the people who work there, the drinks, and of course, the free Internet access. [ a vid I shot the other day of the interior of the place.] 54 Clerk Street Edinburgh EH8 9JB What this means if you’re not familiar with the lay of the land here is that if you’re in the center of Edinburgh (where all the good, old stuff is) go south on North Bridge. And no, I’m not getting a kick back for this post!! K, I’ve got some more blatant plugs later today.

Chicken of the VNC Line-of-sight propagation Line-of-sight propagation refers to electro-magnetic radiation or acoustic wave propagation. Electromagnetic transmission includes light emissions traveling in a straight line. The rays or waves may be diffracted, refracted, reflected, or absorbed by atmosphere and obstructions with material and generally cannot travel over the horizon or behind obstacles. Line of sight propagation to an antenna However, at higher frequencies and in lower levels of the atmosphere, neither of these effects are significant. In practice, the propagation characteristics of these radio waves vary substantially depending on the exact frequency and the strength of the transmitted signal (a function of both the transmitter and the antenna characteristics). Radio horizon[edit] R is the radius of the Earth, h is the height of the transmitter (exaggerated), d is the line of sight distance The radio horizon of the transmitting and receiving antennas can be added together to increase the effective communication range.

WiMAX - 802.16 WiMAX (Worldwide Interoperability for Microwave Access) is a wireless communications standard designed to provide 30 to 40 megabit-per-second data rates,[1] with the 2011 update providing up to 1 Gbit/s[1] for fixed stations. The name "WiMAX" was created by the WiMAX Forum, which was formed in June 2001 to promote conformity and interoperability of the standard. The forum describes WiMAX as "a standards-based technology enabling the delivery of last mile wireless broadband access as an alternative to cable and DSL".[2] Terminology[edit] WiMAX refers to interoperable implementations of the IEEE 802.16 family of wireless-networks standards ratified by the WiMAX Forum. The original IEEE 802.16 standard (now called "Fixed WiMAX") was published in 2001. Mobile WiMAX (originally based on 802.16e-2005) is the revision that was deployed in many countries, and basis of future revisions such as 802.16m-2011. Uses[edit] Internet access[edit] Middle-mile backhaul to fibre networks[edit] Deployment[edit]